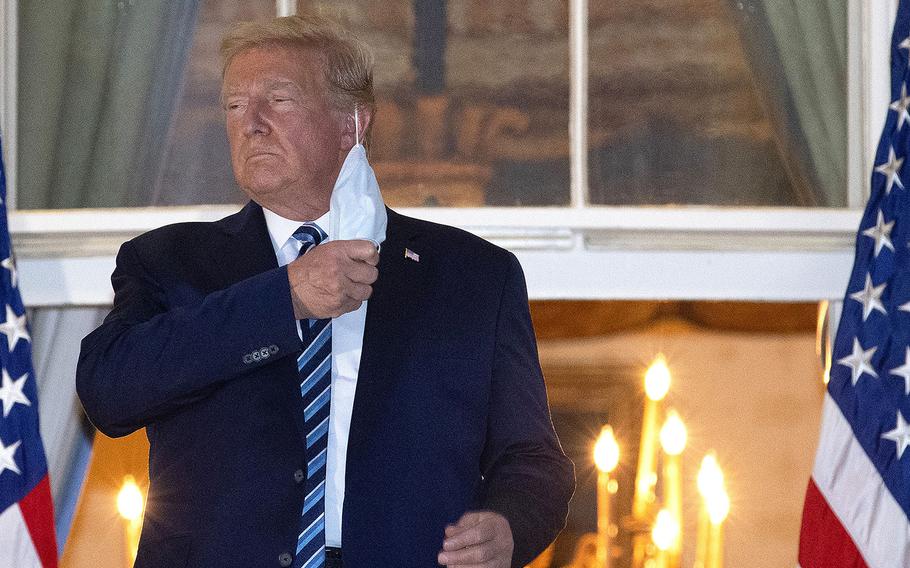 President Donald Trump stands on the balcony outside of the Blue Room at the White House on Oct. 5, 2020, after returning from a hospital stay for COVID-19 at Walter Reed National Military Medical Center. (Win McNamee, Getty Images/TNS)

In a campaign aimed at more than 1,000 counties across the U.S., researchers created an ad using a Trump appearance on Fox News telling people to get vaccinated, and then during October last year ran the video on YouTube in places with low vaccination rates. In the counties where the ad was shown, about 103 more vaccinations were given, on average, than in counties that didn’t get ads.

Trump voters, particularly in rural counties, have been some of the hardest to reach with vaccination despite the former president’s role in helping speed the development of COVID-19 shots during his administration. Many of those areas have been hard hit by the virus, recording large numbers of deaths, yet their vaccination rates lag the rest of the country.

“That’s where so much of the need is,” said Steven Greene, a professor of political science at North Carolina State University, and one of the authors of the paper. “Where are the people speaking to the Trump supporters?”

Greene said that he and colleagues at Stanford University, University of North Carolina Chapel Hill and University of California, Berkeley, began thinking about the problem in 2020, the first year of the pandemic, when it seemed obvious that masks could help stop the spread of the virus, but there were few effective recommendations to get people to wear them.

Vaccines presented the same problem, and along partisan lines — tracking polls by the Kaiser Family Foundation have consistently found that Republicans are less likely to say they’ve been vaccinated and less likely to say they plan to get a shot. About 66% of the U.S. population is fully vaccinated, according to the U.S. Centers for Disease Control and Prevention, well behind many other wealthy nations in Europe and elsewhere.

When the vaccines became available, the researchers saw a fresh opportunity. While Trump initially touted the development of the shots, in the early months of the rollout after President Joe Biden’s election victory, he did not take part in efforts to persuade the public.

“When Donald Trump appeared on Maria Bartiromo making those very favorable comments about vaccines, Marc and I looked at each other over Zoom and we said, ‘This is what we need,’ ” Greene said, referring to his co-author on the paper, University of North Carolina’s Marc Hetherington.

The researchers crafted an online advertisement showing Trump’s comments in the first seconds, before users could skip past it. They then identified counties with vaccination rates below 50% and less than 1 million residents. Half the counties were targeted for ads, and half were excluded to create a control group.

YouTube’s algorithm ended up pushing the ad to people who watched Fox News clips, which may have ended up boosting the effect, and to viewers who watched other conservative-learning personalities, the researchers said.

In total, counties where the ad was shown recorded about 100,000 more vaccinations. The team spent about $100,000 to buy the ads, meaning the cost per shot was about $1.

Around 1 million doses a day were being administered in the month of October when the ads were running, so the overall effect of the campaign was small. But it ran in only a handful of the country’s less-populated counties, on only one social media platform, with a limited number of ad impressions.

“We were neophytes at how to run an online advertising campaign,” Greene said. “I’m sure professionals could do significantly better.”

The work was published Monday as a working paper in the National Bureau of Economic Research. It was funded in part by the Vaccine Confidence Fund, a not-for-profit group that looks at how to use online tools to increase vaccine uptake. It’s funded in part by Facebook-parent Meta Platforms Inc. and the drugmaker Merck & Co., which does not have a COVID-19 vaccine on the market.

There were some limitations in the study. The researchers weren’t able to target exactly who received the ads, and it’s possible that people who watched them were more persuadable or more ready to get vaccinated anyway.

Greene says the research shows that using an influential messenger can help boost vaccine uptake, even after months of politicization.

“There was a lot of talk that what Trump says doesn’t matter, but we just didn’t believe that,” he said.