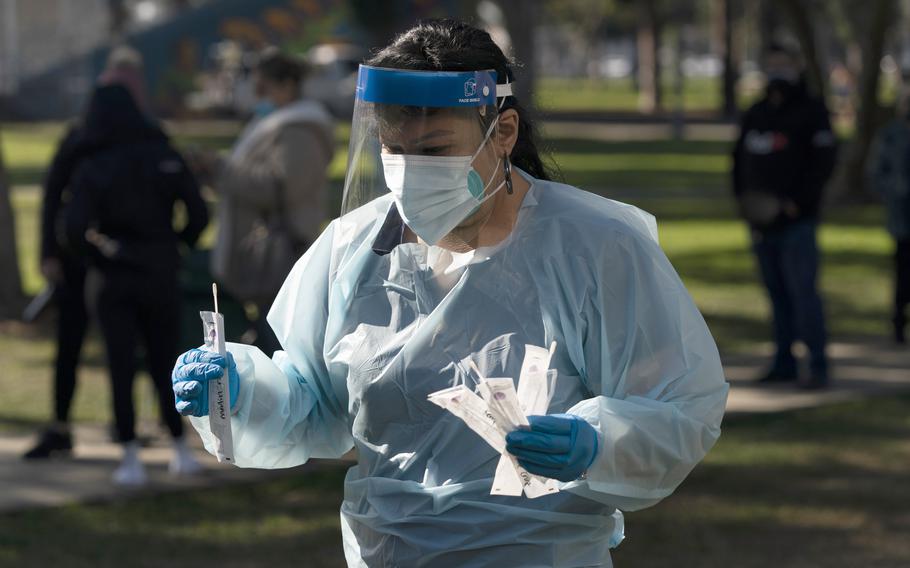 SACRAMENTO, Calif. — With new coronavirus cases surging across the state, California Gov. Gavin Newsom's administration on Saturday proposed spending another $2.7 billion to expand testing and boost hospital staffing, while calling for a new law to give workers more paid time off if they get sick.

California had more than 10,100 people hospitalized with the coronavirus on Friday, or about half of of the peak reached during last winter's surge. Demand for coronavirus testing has soared along with the state's case rates, making it difficult for many to get tested in many parts of the state.

Of the $2.7 billion in new spending, about $1.2 billion of it would be for testing, including money to pay for extending the hours and capacity at state-run testing sites, while also sending millions of tests to local health departments, community clinics and schools.

Newsom, a Democrat, wants the Democratic-dominated state Legislature to approve $1.4 billion of the money right away so he can spend it now instead of waiting for the start of the new fiscal year on July 1.

The state already has $1.7 billion to spend fighting the pandemic, money the state Legislature approved last summer. But the Newsom administration says they need more money to continue spending at the same level as the omicron variant continues to spread.

The omicron variant spreads even more easily than other coronavirus strains, and has already become dominant in many countries. It also more easily infects those who have been vaccinated or had previously been infected by prior versions of the virus.

However, early studies show omicron is less likely to cause severe illness than the previous delta variant, and vaccination and a booster still offer strong protection from serious illness, hospitalization and death.

"From day one, California has taken swift and direct action to battle COVID-19 with policies that have saved tens of thousands of lives, but there's more work to be done," Newsom said in a news release.

It's unclear if lawmakers would agree to spend the money early. Last month, Assembly Budget Committee chair Phil Ting, a Democrat from San Francisco, said he did not think there was any need to rush to approve new spending. But at the time, Ting said things could change.

One thing that has changed since last month is more people are testing positive for the virus. Over the past seven days, 21.7% of those tested for the virus have tested positive. That's the highest rate ever for California.

With more people testing positive, Newsom is asking the state Legislature for a new law requiring companies to give workers more paid time off if they get sick. Last year, California had a law that required companies with 26 employees or more to give their workers up to an additional 80 hours of paid sick leave for things like having coronavirus symptoms, scheduling a vaccine or caring for a child who is doing school at home.

That law expired in September and state lawmakers did not extend it. Now, Newsom wants to bring some form of it back. It's unclear what he's asking for, however. A news release from his office called for "new legislation to implement supplemental paid sick leave policies given the current situation being driven by the Omicron variant to better protect our frontline workers." It did not provide more details.

Last year's law was a little easier for businesses to comply with because many of them qualified for a federal payroll tax credit that would reimburse them for most of the money they had to pay their workers while they took the extra time off. But that tax credit expired at the end of September, according to the Internal Revenue Service.