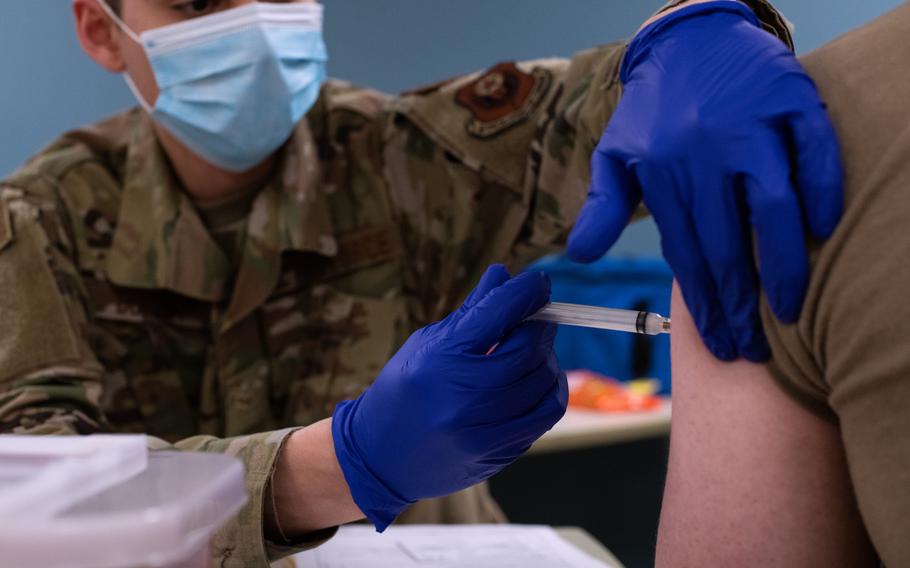 Airman 1st Class Thadyn DuPont, an aerospace medical technician with the 137th Special Operations Medical Group, injects the COVID-19 vaccine into the arm of an Oklahoma Army National Guard Soldier at the Armed Forces Reserve Center in Norman, Okla., Jan. 15, 2021. A day after losing a lawsuit challenging a COVID-19 vaccine mandate for all National Guard members, Oklahoma state leaders were mostly quiet on their next steps, except to urge the Biden administration to strongly consider any exemption requests it receives. (Andrew LaMoreaux/U.S. Air National Guard)

(Tribune News Service) — A day after losing a lawsuit challenging a COVID-19 vaccine mandate for all National Guard members, Oklahoma state leaders were mostly quiet on their next steps, except to urge the Biden administration to strongly consider any exemption requests it receives.

O'Connor said he was disappointed by the decision but urged the Biden administration to "review in good faith all exemptions and religious accommodations requested by our fellow Oklahomans," according to a Wednesday statement.

O'Connor also predicted the ruling would deplete the number of guardsmen.

"We will not be surprised if the President's vaccine mandate actually reduces the nation's military readiness instead of promoting it," O'Connor said.

Stitt's office said it had reviewed the judge's order but declined to comment any further.

Earlier this month, Brig. Gen. Thomas H. Mancino, adjutant general of the Oklahoma National Guard, told Guard members losing the lawsuit would likely mean a need to get the vaccine.

"Anyone exercising their personal responsibility and deciding not to take the vaccine must realize that the potential for career-ending federal action, barring a favorable court ruling, legislative intervention, or a change in policy is present," Mancino wrote in his letter to Guard members.

Unless an Air National Guard member is granted a medical, religious or administrative exemption, members not vaccinated by Dec. 31 will not be able to participate in drills, training, or other duties, according to guidance issued by the Air Force.

In his ruling, Judge Friot recommended that the Biden administration give Guard members more time to comply with the vaccine requirement because of the lawsuit.

This story is provided in part through a grant by the Kirkpatrick Foundation.