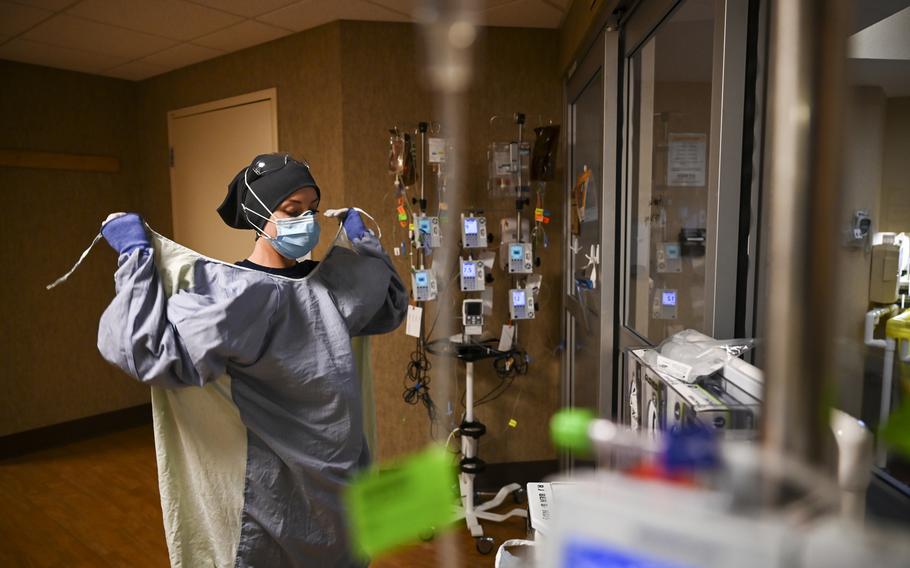 North Memorial Health Hospital Critical Care Nurse Kayla Lynch wears a protective gown before entering the room of a COVID-19 patient during her shift Monday, Dec. 7, 2020 in Robbinsdale, Minn. Hospitals in Michigan and Minnesota on Tuesday, Nov. 16, 2021, reported a wave of COVID-19 patients not seen in months as beds were filled with unvaccinated people and health care leaders warned that staff were being worn down by yet another surge. (Aaron Lavinsky/AP)

MINNEAPOLIS — The Department of Defense will send medical teams to two major Minnesota hospitals to relieve doctors and nurses who are swamped by a growing wave of COVID-19 patients, Gov. Tim Walz announced Wednesday.

The teams, each comprising 22 people, will arrive at Hennepin County Medical Center and St. Cloud Hospital next week and begin treating patients immediately, Walz said in a conference call from the Finnish capital of Helsinki. the latest stop on his European trade mission.

Minnesota has become one of the country's worst hotspots for new COVID-19 infections. Hospital beds are filling up with unvaccinated people, and staffers are being worn down by the surge. Health Commissioner Jan Malcolm said Tuesday that she's ready to expand access to booster vaccines to all adults by the end of the week if the federal government doesn't act first.

"Our best defense against this is the vaccine," Walz told reporters. He noted that Minnesota is No. 2 in the county for the number of booster shots given, behind only Vermont, and that first doses have risen 60% over the last week. "And we know that that is our way out of this. ... I need Minnesotans to recognize, as we've been saying, this is a dangerous time."

Walz and Malcolm thanked U.S. Sen. Amy Klobuchar for helping to secure the federal teams and said they hope more will be approved for other Minnesota hospitals, which have already applied for them.

"There's just been a tremendous demand for those teams nationwide. At this point in time, there are very, very few teams available to be deployed across the whole nation, so the fact that Minnesota's getting two of them is great good news," Malcolm said.

The Minnesota Nurses Association said the staffing shortage is the result of years of cost-cutting and short-staffing that have left hospitals poorly equipped to handle the pandemic.

"There is no shortage of Minnesota nurses who want to work at the bedside and care for patients. There is a shortage of nurses willing to work under the unsafe and unsustainable conditions hospitals have created," the union's president, Mary Turner, said in a statement. "For years, hospitals have been understaffing nurses, leaving fewer of us to care for more patients. These decisions have driven nurses away from the bedside and created the current retention crisis."

The governor also announced that a third skilled-nursing facility has agreed to serve as a "hospital decompression" site for patients who no longer need acute hospital care but aren't ready to go home. Cerenity Senior Care-Marian of St. Paul will accept up to 27 patients from Twin Cities hospitals that are close to capacity.

Ten nurses from the federal Public Health Service and 15 nursing assistants from the Minnesota National Guard and private vendors will provide transitional care. Similar sites have already been set up at nursing homes in Brainerd and Shakopee to create additional transitional care beds, which are in short supply.

Walz renewed his calls for the Legislature to approve a series of proposals he made early last month to give hospitals and care centers more flexibility to cope with the surge. A special session needed to pass that plan, plus $250 million in bonuses for frontline workers and drought aid for farmers, has been held up for months over a stalemate between the Republican-controlled Senate and the Democratic governor, who insists that Republicans agree not to use the session to fire Malcolm, as some have threatened.