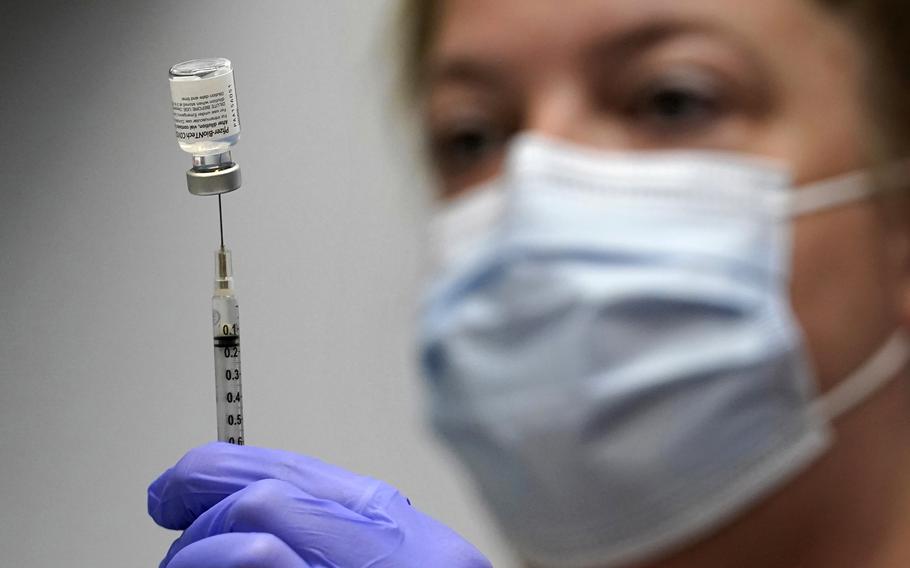 WASHINGTON — Federal employees can be fired for refusing to be vaccinated against the coronavirus, but as their disciplinary cases wind through the system, they will report to work alongside vaccinated colleagues, according to Biden administration guidance issued this week.

The new guidance to implement a vaccine mandate for the government, which President Joe Biden announced last week, represents a reversal of the strategy the White House coronavirus task force pushed in August for those employees without shots who refused under an earlier plan to get regular testing for covid-19.

Then, agencies were told they could place employees on administrative leave, a paid suspension used widely for short-term absences but also when a manager proposes removing an employee.

“They seem like they decided to go with a harder approach,” said Jeff Friday, general counsel for the National Federation of Federal Employees, which has about 100,000 members at the Defense Department, U.S. Forest Service and other agencies.

“You’re still going to have to work until you’re let go,” Friday said. “Paid leave is certainly a disincentive to getting vaccinated.”

The rules on how to enforce the mandate were among several new details of what will be a complex, potentially messy process that will likely stretch deep into winter if not longer, given the government’s sprawling size and presence in every state. The details will leave multiple groups of people following different rules in the same workplace.

In most agencies, for example, civil servants work side-by-side with employees who work for federal contractors. But under the policy announced by the president last week, contractors who are not vaccinated must provide proof of a negative coronavirus test taken within three days before entering a federal facility - or enroll in a regular testing program.

Contractors, federal workers and visitors who show they are vaccinated are required to wear masks indoors in federal buildings located in areas of high or substantial viral transmission, but not in areas where transmission is lower.

Visitors must attest to their status before entering a federal building — although not if they are coming to receive benefits. Unvaccinated visitors or those who decline to provide their status also must provide proof of a negative test taken three days or sooner before coming into the building.

Most of the 2.1 million federal employees must receive their last dose of their vaccine no later than Nov. 8 to meet a Nov. 22 deadline to be fully vaccinated. The timing between the first and second shots will depend on which vaccine they take.

Teleworking employees must get shots, too, and proof of vaccination can be transmitted electronically, according to the new rules. Those who are not fully vaccinated or decline to tell their bosses their status must wear masks in the office, physically distance from colleagues and comply with restrictions for work travel.

New hires who are scheduled to start work after Nov. 22 must be fully vaccinated, except in “limited circumstances” where the government must make a reasonable accommodation to exempt them, the guidance says. Exceptions can be made for “urgent, mission-critical” hires, but those employees must be vaccinated within 60 days.

The task force said it is preparing additional guidance on how agencies should consider requests for religious and medical exemptions to the vaccine, a provision of the mandate that has stirred concern the offices will establish wildly varying standards.

To many set to be involved in the process, enforcement of the mandate remains the most worrisome provision.

Union officials and attorneys who represent federal employees say they are concerned that managers could move to dismiss workers with exemplary records if they don’t want a vaccine. They also said firing large swaths of employees would be unrealistic in parts of the country with low overall vaccination rates.

“Are some agencies just going to look the other way?” asked Debra D’Agostino, a founding partner of the Federal Practice Group in Washington. “In some places they would be losing a huge chunk of the workforce if they moved to fire people. It can’t be that black and white.”

Secretary of Veterans Affairs Denis McDonough acknowledged the possibility this week as he contemplated the repercussions for some 45,000 employees of the Veterans Health Administration — the agency’s largest department — who, operating under the separate mandate announced this summer, have not completed paperwork attesting that they have gotten shots or that they intend to.

McDonough said his staff is working with union officials and reaching out to these employees with a “public awareness campaign.” The employees have until Oct. 8 to either get fully vaccinated or request a medical or religious accommodation.

Those who fail to comply will be subject to the “progressive discipline” process, he said. But he added that “the last thing we want to do is have to fire trained personnel.”

Union officials said they do not believe any discipline for the broader workforce would begin before the November deadline.

An agency should first use a carrot approach, explaining the benefits of the vaccine and ways to get a shot, the guidance says. If someone still refuses to comply, managers should follow the disciplinary process laid out in their collective bargaining agreements with employees. These often start with warnings, a letter of reprimand or suspensions before dismissal.

Under federal personnel law, an agency generally must first propose a disciplinary action, which must take effect after at least 30 days, during which the employee has the opportunity to respond. The agency must consider the response before taking a final action.

There is no deadline for the agency to make a final decision after receiving that response and in many cases the process takes much longer than 30 days.

Guidance for the first coronavirus plan, issued in late July, explicitly called for administrative leave - paid by the government — for some who declined to be tested. Administrative leave has been part of the disciplinary process for federal employees, but it has been abused by managers who used it to sideline troublesome workers while misconduct or poor performance reports were adjudicated, and managers were often slow to move the disciplinary process forward.

The Trump administration sought to speed up the dismissal process as part of a controversial series of executive orders that tried to weaken the unions that represent more than half the federal workforce. But Biden reversed the policies within days of taking office.

The new guidance anticipates that before moving to fire an employee, an agency generally would use progressive discipline, said Michael Kator, of Kator, Parks, Weiser & Harris, a District of Columbia law firm specializing in federal employment law.

“For example, an agency could say ‘If you don’t do this, we’re going to suspend you. After suspension, if you haven’t gotten vaccinated, you’re going to be disciplined again,’ “ he said in a phone interview. “It can go through multiple iterations until they finally get to the point where they say ‘OK, we get it, you don’t want to comply, you’re fired.’ “

He said one possible basis for firing would be a charge of insubordination. “They will get a directive from their agency head or their supervisor to do this and if they don’t do it, just like any other direction from the supervisor, if it’s lawful they’re pretty much obligated to comply,” he said.