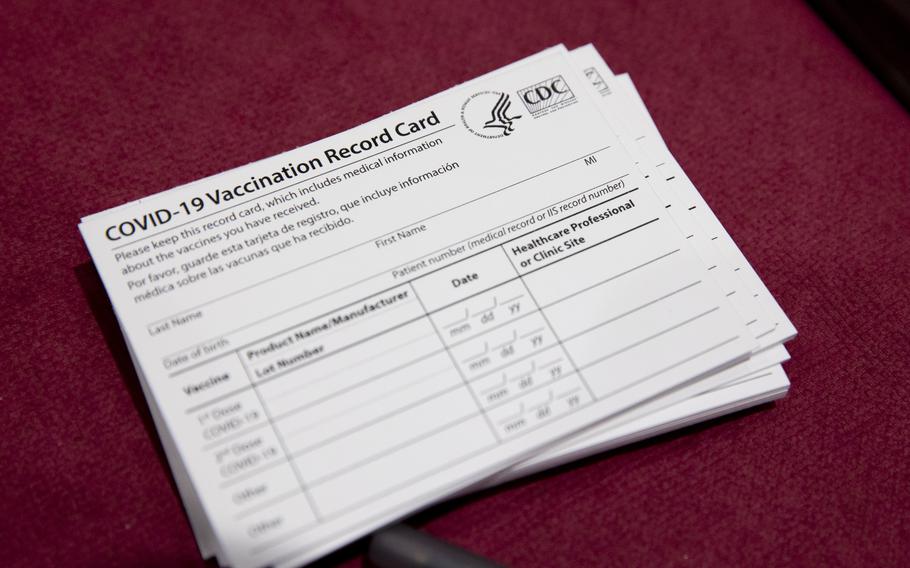 Physical coronavirus vaccination cards are the main proof of inoculation across much of the United States. (Rachel Wisniewski for the Washington Post)

Three Vermont state troopers have resigned after they were accused of being involved in a scheme to create fake coronavirus vaccination cards in the nation's most vaccinated state, the state police announced Tuesday.

Shawn Sommers and Raymond Witkowski resigned on Aug. 10, a day after a colleague raised concerns about the alleged fraud to supervisors, while David Pfindel's resignation took effect Friday after an investigation by Vermont's Department of Public Safety, according to a police statement. Authorities said the three men, who were reported to supervisors by their fellow troopers, "are suspected of having varying roles in the creation of fraudulent covid-19 vaccination cards, which may be a violation of federal law."

The Vermont State Police said it was unable to announce the resignations before Tuesday, or provide any additional details about the case, because the FBI is now investigating the matter. It remains unclear why and for whom the troopers allegedly made the fake cards.

Col. Matthew T. Birmingham, director of the Vermont State Police, said the accusations against the officers "involve an extraordinary level of misconduct." He added that he is "embarrassed" about a situation that has tarnished the department's reputation.

"I could not be more upset and disappointed," he said in a statement. "If these allegations are proved to be true, it is reprehensible that state troopers would manipulate vaccination cards in the midst of a pandemic, when being vaccinated is one of the most important steps anyone can take to keep their community safe from covid-19."

Efforts to reach Sommers, Witkowski and Pfindel were unsuccessful. Neither the U.S. attorney's office in Burlington nor the Vermont Troopers' Association, the union that represents sergeants and troopers, immediately responded to requests for comment Wednesday.

Making or buying a counterfeit card violates federal laws, as it entails the unauthorized use of an official government agency's seal, according to the FBI. Those linked to a fake vaccination card can face a fine and a prison sentence of up to five years. The FBI warned unvaccinated people earlier this year: "Do not buy fake vaccine cards, do not make your own vaccine cards, and do not fill-in blank vaccination record cards with false information."

More than 68 percent of Vermont is fully vaccinated, the highest rate of any state, according to data compiled by The Washington Post.

More and more counterfeit vaccination cards are popping up across the United States in what has become a "cottage industry," as some unvaccinated people try to evade restrictions requiring proof of the shot to enter public spaces, schools and concerts. Officials with U.S. Customs and Border Protection announced last month that its officers seized more than 3,000 fake vaccination cards that were passing through Memphis, a shipping hub.

Senate Majority Leader Charles Schumer, D-N.Y., recently pushed for a federal crackdown to curtail the sale of fake vaccination cards with covid cases on the rise due to the highly transmissible delta variant and the millions who remain unvaccinated.

"Some people, rather than get the vaccine, which is free, are paying money for a fake card and risking prosecution because it's against the law," he said at an August news conference. "Who could be that dumb?"

Arrests have been made in recent months of homeopathic doctors, bar owners, pharmacists and others accused of selling fake cards. The Manhattan district attorney announced last week that the person behind the "AntiVaxMomma" Instagram account - Jasmine Clifford, 31, of Lyndhurst, N.J. - has been charged with selling hundreds of fake vaccination cards. Clifford advertised fake cards on social media for $200 apiece featuring "real serial [numbers]" and available to "be mailed to any state" - some of which allegedly went to front-line workers.

In contrast to the alleged actions of the Vermont state troopers, local police departments nationwide are working to boost vaccination rates. Some agencies have threatened disciplinary action against law enforcement officials who refuse vaccination.

The virus has been the leading cause of death for law enforcement officers since last year, according to the nonprofit Officer Down Memorial Page. The organization says 242 deaths were linked to the deadly disease in 2020, or about 65 percent of all officer deaths that year. Around 55 percent of all officer deaths this year have been attributed to covid, with 137 officers succumbing to the virus this year.

Pfindel was hired by the state police in January 2014, while Sommers and Witkowski were hired in July 2016. Witkowski was involved in a 2019 case in which he shot and wounded a man who reportedly fired at troopers, according to VTDigger, a nonprofit news outlet. Witkowski was cleared of criminal wrongdoing by the state attorney general, who ruled that the trooper's use of force was justified.

Vermont Public Safety Commissioner Michael Schirling said in a statement that an internal review did not indicate the police could have prevented the alleged fraud. Schirling applauded the troopers who alerted state police to the alleged scheme.

"As soon as other troopers became aware of this situation, they raised the allegations internally, and commanders took swift and decisive action to hold these individuals accountable and report this matter to federal authorities," Schirling said.