Poll: 2 in 3 Americans support mask mandates in schools as many worry kids will get very sick 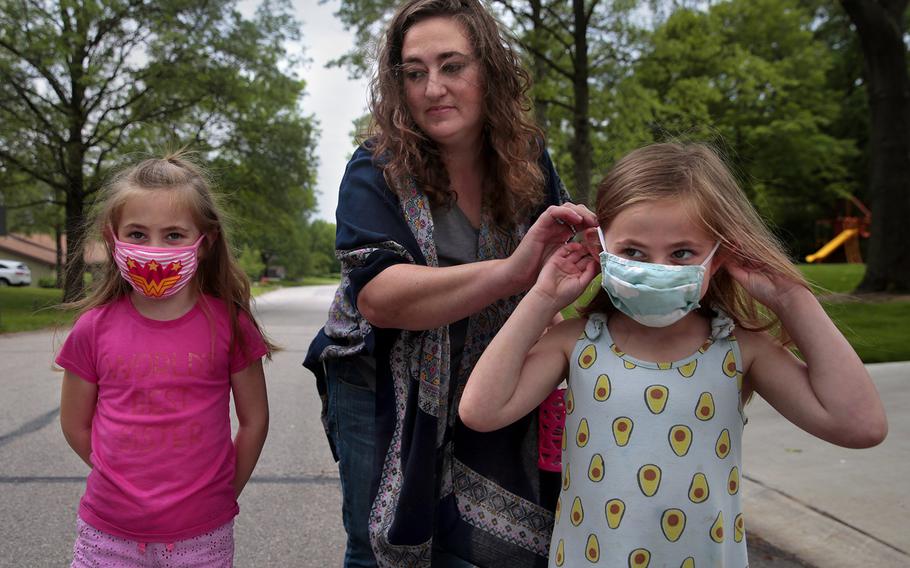 Jenny Berla helps her twins Isla, left, and Elodie with their masks as they approach their sister's school to pick her up after class on Wednesday, May 19, 2021. Berla, who is planning to send the girls to kindergarten this fall, is concerned that dropping mask mandates before young children are eligible for vaccinations leave them open to risk. (Robert Cohen, St. Louis Post-Dispatch/TNS)

(Tribune News Service) — U.S. parents are eager for kids to return to school, but they're concerned their children will get seriously ill if they catch COVID-19. A majority support requiring masks and teacher vaccinations amid a surge in pediatric cases.

Parents are more skeptical of online learning than they were last school year, according to a USA TODAY/Ipsos poll, which found declining optimism about distance learning. More than 1,000 schools, having just reopened, halted in-person learning and went back online because of COVID-19 outbreaks. Thousands of children are quarantined.

Half of parents say their district adequately prepared students for remote instruction, a 15-percentage-point drop from last May. Concerns are especially high among Black parents, 37% of whom say their children were well-prepared for distance learning.

Parents' confidence that their children "will eventually be able to make up any lost ground" has taken a dip. More than half of parents say online learning caused their children to fall behind.

Among parents of schoolchildren, 7 in 10 support returning to full-time instruction in classrooms. Support is strongest among white and Asian parents and weakest among Black and Hispanic parents, communities that have been hit harder by COVID-19.

The poll was conducted online from Aug. 30 to Sept. 1 among roughly 2,000 adults. About a fifth are parents of schoolchildren. The poll had a credibility interval, akin to a margin of error, of plus or minus 2.5 percentage points.

Sivya Leventhal, 39, a mother of two in the Dallas area, kept her 7-year-old son home all last year, in part because he wears glasses and "wasn't crazy about masking." But the second grader was "so hungry" to return to the classroom and is now in school. He's gotten used to wearing a mask and understands it helps to keep him and others safe.

"Being together and wearing masks is better than the isolation of everyone being home," says Leventhal, a Democrat.

Masking was optional at his school this year — at least until recently: Texas is one of more than half a dozen states that banned school mask requirements. Leventhal's school district issued a temporary mask mandate in late August amid litigation throughout the state challenging the ban's legality.

Before that change went into effect, Leventhal says, case numbers at the school grew exponentially — by the last week of August, nearly 800 cases had been reported, her district's data shows. "Percentage-wise, that's not that high," Leventhal says, noting the district serves more than 50,000 students. "But it's so much higher than it needs to be."

A majority of parents in the USA TODAY/Ipsos poll agree with Leventhal that masks should be required.

Roughly 2 in 3 Americans — parents and non-parents alike — are in favor of schools or states implementing mask mandates for teachers and students. Support is strongest among parents of color. Forty-three percent of poll participants say student mask-wearing should be at the discretion of individual parents.

Respondents are similarly in favor of requiring teachers and other school employees to be vaccinated against COVID-19: 65% of all participants — and 56% of parents — say they support such mandates.

Opinions are slightly more mixed when it comes to student vaccination mandates: Roughly 6 in 10 respondents — and half of parents — say they're in favor of requiring eligible students to be vaccinated against the virus. A person's political views are most likely to determine their position: 31% of Republican parents of schoolchildren say they support such mandates, compared with 70% of Democrats.

"I think the masks are worthless," says Wayne Pittman, a Republican father of three in Monument, Colo. "They're just a feel-good measure and a way for people to get mad at each other and point fingers."

Pittman, 46, a civil engineer, supports his kids' schools' return to full-time, in-person learning. "That's where kids learn the best," Pittman says. He says his children, ages 10, 13 and 15, grew listless from all the remote instruction last year, their motivation levels so low they even refused to walk the family dog.

He's wary of vaccine requirements as a way to keep them in school. Pittman is vaccinated — his parents have respiratory issues — as are his two older children. But vaccination should be a personal choice, he says. The decision to sign his teenagers up for the shots was largely based on convenience: The family will soon fly to Hawaii, which waives certain travel restrictions for visitors who show proof of vaccination.

He and his youngest child contracted COVID-19 this year, both with mild symptoms. "You should have the right to not be vaccinated if you're not afraid" of COVID-19, he said.

Mohit Mathew, 32, a pharmaceutical scientist in Germantown, Md., has a different take. School mask and vaccination mandates are "just common-sense rules," says Mathew, who has a 5-year-old daughter in public school. He has "absolutely no doubt" that his daughter will get vaccinated against COVID-19 as soon as she's eligible.

Mathew, who doesn't affiliate with a political party, says mask wearing is the norm in his community, including at his daughter's school, which is one reason he felt comfortable sending her back for in-person learning. The school did a pretty good job with remote instruction, but the in-person experience is especially hard to replicate for children her age, he says.

Nationally, children account for roughly 15% of all cases during the pandemic, according to data collected by the American Academy of Pediatricians.

Forty-one percent of parents in the poll say severe illness would be their top concern if their kids were to be exposed to the coronavirus, including 60% of Black parents. Among all parents, more than 15% worry about higher-risk family members catching the virus from their kids or their kids missing class time because of an infection.

A majority of parents — 60% — say schoolchildren face greater risks from COVID-19 than they did last year.

Tameka Dumas, 48, a mother of two in Grenada, Miss., is wary of in-person learning because of the health risks. Her younger son, who's back in class, regularly tells her how scared he is of catching the virus at his high school. He doesn't have the option of distance learning, and students at his school aren't required to mask up.

"He's still giving it his all," Dumas says, but returning to school affects him emotionally. "We should not have to put that kind of stress on them. ... It's unfair for a child to have to go to school and feel that way."

To Dumas, a Democrat whose son got the vaccine as soon as he was eligible, school mask and vaccine requirements are a no-brainer. "The more time these children are spending in that school" without such mandates, she says, "the more likely they are to get sick. I don't know what the excuse is."