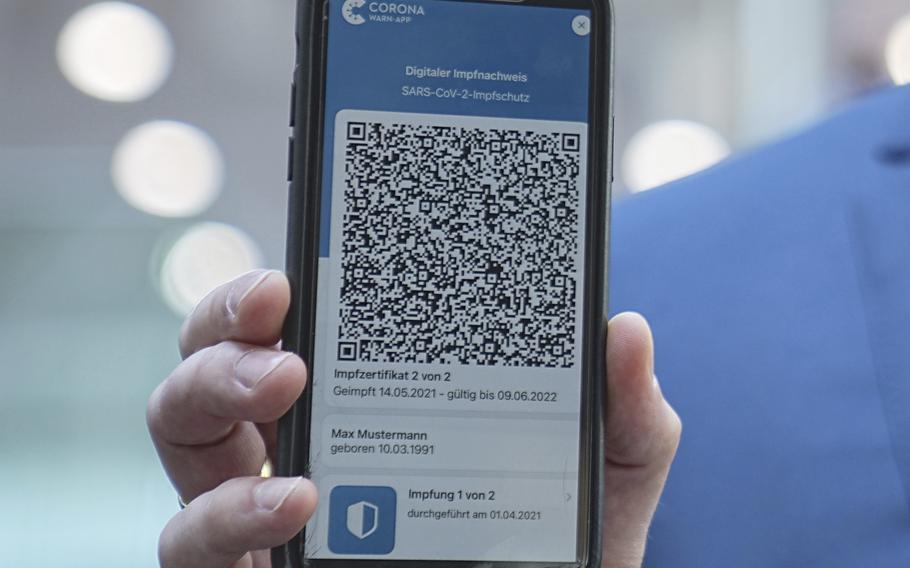 Jens Spahn, Germany's Federal Minister of Health, shows the app for the digital vaccination certificate at the regular press conference on the Corona situation in Berlin, Germany, Thursday, June 10, 2021. (Michael Kappeler/dpa via AP)

BERLIN — Germany on Thursday started rolling out a digital vaccination pass that can be used across Europe as the continent gets ready for the key summer travel season.

The country's health minister said starting this week vaccination centers, doctors practices and pharmacies will gradually start giving out digital passes to fully vaccinated people. The CovPass will let users download proof of their coronavirus vaccination status onto a smartphone app, allowing them easy access to restaurants, museums or other venues that require proof of immunization.

The vaccination passport should be available to everyone in Germany who is fully vaccinated by the end of this month, Health Minister Jens Spahn said.

"The goal is that this certificate can also be used in Helsinki, Amsterdam or Mallorca," Spahn told reporters in Berlin.

People who have been fully vaccinated will either get a letter with a QR-code they can scan with their phones or they can contact their doctors or pharmacies to retroactively get the digital pass.

"By doing so, we in the European Union are setting a cross-border standard that doesn't exist elsewhere in the world yet," Spahn said, adding that the digital vaccination pass is an important step for the revival of international tourism.

The country's disease control agency, the Robert Koch Institute, reported Thursday that 47% of the population, or about 39.1 million people, have gotten one shot. Almost 24%, or 19.9 million people, are fully vaccinated.

Also Thursday, Germany's committee on vaccinations, known as Stiko, recommended that children aged 12 to 15 only receive the shot if they have certain illnesses such as obesity, chronic lung or heart diseases, dpa reported. Healthy teenagers can, however, also be vaccinated if they, their parents and doctors decide to do so.

The German panel's opinion differs from the European Medicines Agency, which last month recommended expanding the use of the Pfizer-BioNTech vaccine to children 12 to 15, a decision that offers younger and less at-risk populations across the continent access to a COVID-19 shot for the first time.

The head of Stiko, Thomas Mertens, said while youths are very well protected by the vaccine, only few children and teenagers had participated in medical studies and possible severe side effects could therefore not be excluded.

Mertens said the recommendation was also based on the fact that very few children fall severely ill with COVID-19 as opposed to older people.