Theory that coronavirus came from Chinese lab, once dismissed, now under scrutiny 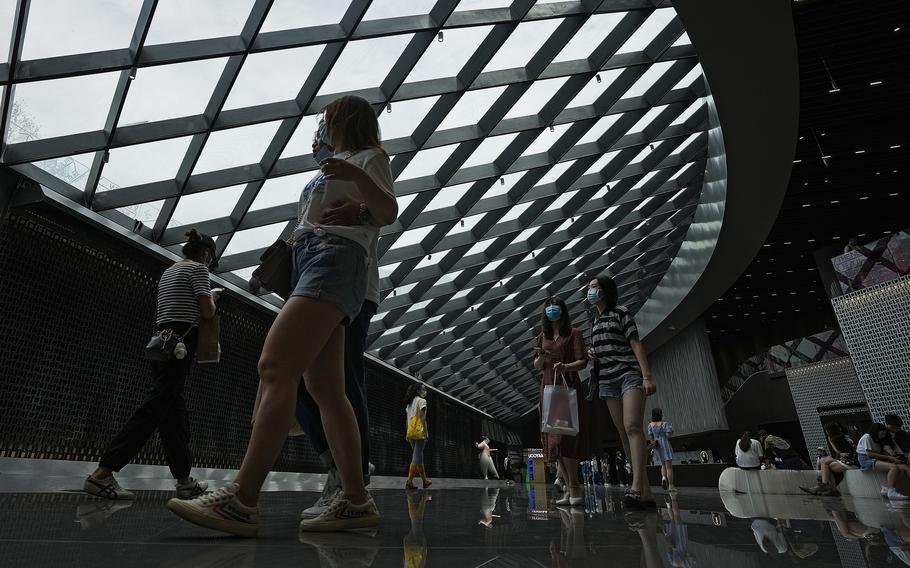 People wearing face masks to help curb the spread of the coronavirus visit a shopping mall in Beijing, China, on June 6, 2021. (Andy Wong/AP)

WASHINGTON — Once dismissed by most public health experts and government officials, the hypothesis that COVID-19 leaked accidentally from a Chinese lab is now receiving scrutiny under a new U.S. investigation.

Experts say the 90-day review ordered on May 26 by President Joe Biden will push American intelligence agencies to collect more information and review what they already have. Former State Department officials under President Donald Trump have publicly pushed for further investigation into virus origins, as have scientists and the World Health Organization.

Many scientists, including Dr. Anthony Fauci, say they still believe the virus most likely occurred in nature and jumped from animals to humans. Virus researchers have not publicly identified any key new scientific evidence that might make the lab-leak hypothesis more likely.

Virologists also say it is unlikely that any definitive answer about virus origins will be possible in 90 days. The work to fully confirm origins and pathways of past viruses — such as the first SARS or HIV/AIDS — has taken years or decades.

A look at what is known about the U.S. investigation of the virus.

Biden ordered a review of what the White House said was an initial finding leading to "two likely scenarios," an animal-to-human transmission or a lab leak. The White House statement says two agencies in the 18-member intelligence community lean toward the hypothesis of a transmission in nature; another agency leans toward a lab leak.

One document drawing new attention is a State Department fact sheet published in the last days of Trump's administration. The memo notes that the U.S. believes three researchers at a Wuhan, China, lab sought medical treatment for a respiratory illness in November 2019. However, the report is not conclusive: The origin and severity of the staffers' illness is not known — and most people in China regularly go to hospitals, not primary-care physicians, for routine care.

The memo also pointed to "gain of function" studies — which in theory could enhance the lethality or transmissibility of a virus — allegedly done at the Wuhan lab with U.S. backing. However, National Institutes of Health Director Francis Collins has since adamantly denied that the U.S. supported any "gain-of-function" research on coronaviruses in Wuhan.

David Feith, who served as deputy assistant secretary of state for East Asian and Pacific Affairs under Trump, said he supported Biden's call for an enhanced review. "Implicit in the president's statement is that there is more to analyze and more to collect than has been analyzed or collected to date," Feith said.

The White House statement criticized China for a lack of transparency, echoing previous criticisms by Democrats and Republicans. "The failure to get our inspectors on the ground in those early months will always hamper any investigation into the origin of COVID-19," the White House said.

The Associated Press has reported on China's interference in the World Health Organization's probes of the virus and its fanning of conspiracy theories online. China has also forced journalists to leave the country in recent years and silenced or jailed whistleblowers from Wuhan and elsewhere.

The lack of transparency in China is a significant and familiar challenge. But that does not in itself signal that something in particular is being hidden.

"The problem is when you make that announcement (Biden's call for investigation) in a highly politicized environment, it makes it even less likely that China will cooperate with efforts to find the origins of the virus," said Yanzhong Huang, a senior fellow for global health at the Council on Foreign Relations.

The most compelling argument for investigating the possibility of a lab leak is not any new hard evidence, but rather the fact that another pathway for virus spread has not been 100% confirmed.

"The great probability is still that this virus came from a wildlife reservoir," said Arinjay Banerjee, a virologist at the Vaccine and Infectious Disease Organization in Saskatchewan, Canada. He pointed to the fact that spillover events – when viruses jump from animals to humans – are common in nature, and that scientists already know of two similar beta coronaviruses that evolved in bats and caused epidemics when humans were infected, SARS1 and MERS.

However, the case is not completely closed. "There are probabilities, and there are possibilities," said Banerjee. "Because nobody has identified a virus that's 100% identical to SARS-CoV-2 in any animal, there is still room for researchers to ask about other possibilities."

Confirming with 100% certainty the origin of a virus is often not fast, easy, or always even possible.

For example, scientists never confirmed the origin of smallpox before the disease was eradicated through a global vaccination program.

In the case of Severe Acute Respiratory Syndrome (SARS) – a disease caused by a beta coronavirus, like the current coronavirus – researchers first identified the virus in February 2003. Later that year, scientists discovered the likely intermediary hosts: Himalayan palm civets found at live-animal markets in Guangdong, China. But it wasn't until 2017 that researchers traced the likely original source of the virus to bat caves in China's Yunnan province.

From a scientific perspective, researchers are always keen to better understand how diseases evolve. From a public health perspective, if a virus has transitioned to being spread mostly by human-to-human contact, discovering its origins is not as essential to strategies for containing the disease.

"Questions of origins and questions of disease control are not the same thing once human-to-human transmission has become common," said Deborah Seligsohn, an expert in environment and public health at Villanova University.

Republicans have pressed for more inquiries into a possible lab leak as part of a broader effort to blame China and vindicate Trump's handling of the pandemic. Nearly 600,000 people in the United States have died of COVID-19, the highest toll of any country.

Many scientists caution that it's unlikely a 90-day investigation will yield definitive new answers.

"We rarely get a 'smoking gun,'" said Stephen Morse, a disease researcher at Columbia University. "Even under the best of circumstances we rarely get certainty, just degrees of likelihood."

Any findings will likely be politically explosive, especially if new evidence comes to light supporting or dismissing the zoonotic transfer or lab-leak theory. And a failure to reach definitive conclusions, almost inevitable after a 90-day review, could provide grist for Trump supporters and opponents alike, as well as embolden conspiracy theorists.

Meanwhile experts like the Council on Foreign Relations' Huang suspect China may simply clamp down more, adding another complication to already tense relations. "This will likely make it even more challenging to extract concessions from China to allow another team to visit Wuhan, or have unfettered access to investigate there," he said.