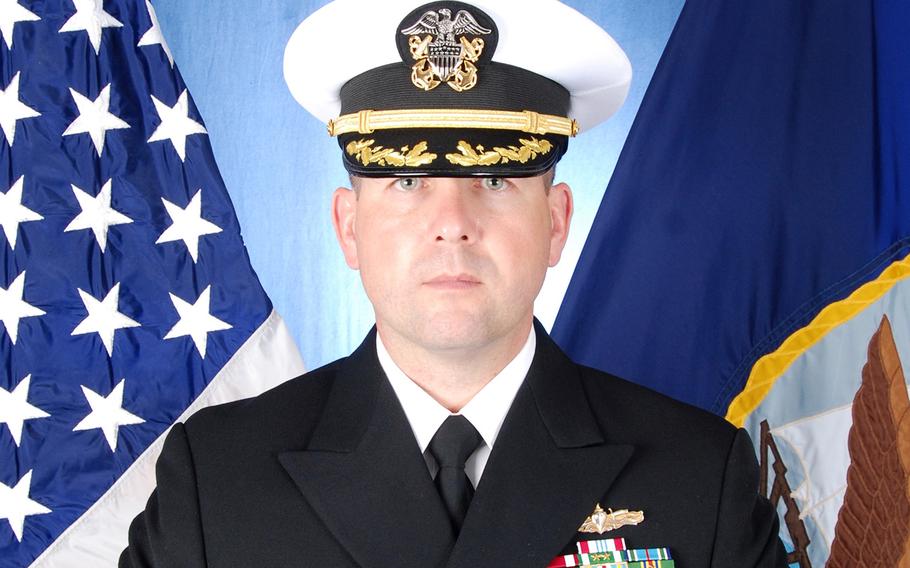 WASHINGTON — The court-martial of Cmdr. Bryce Benson, who was the commanding officer of the USS Fitzgerald when it was involved in a deadly 2017 collision, has taken a new turn.

A military judge has disqualified Navy Adm. Frank Caldwell from serving as the convening authority in Benson’s case, effectively pausing the legal action against him and raising the possibility that the charges could be dismissed.

“It’s a major win” for Benson and his legal team, said Lawrence B. Brennan, a law professor at Fordham University School of Law who is a retired Navy captain who served in the Judge Advocate General’s Corps. “I would say that it is improbable that either the vice chief or the CNO could act as convening authorities in these cases. It’s highly improbable.”

Seven sailors were killed June 17, 2017, when the Fitzgerald and a commercial vessel, the ACX Crystal, collided in the dark in busy waters off the coast of Japan. Benson is charged with two counts of dereliction of duty through neglect and improper hazarding a vessel through negligence. A charge of negligent homicide has been dropped.

In a new ruling shared with Stars and Stripes, the judge, Capt. J.T. Stephens, found that Caldwell had stepped outside his neutral role in a related January 2018 hearing.

“The court finds that the Defense established by a preponderance of the evidence that (Caldwell) abdicated his neutral role in favor of a prosecutorial role” through comments made outside of the Benson case, Stephens said.

The move was lauded Wednesday by Benson’s attorney.

“Our system’s rules — especially those derived from Article 1 of the (Uniform Code of Military Justice) — are designed to guarantee the fundamental right to a fair trial,” said Lt. Cmdr. Justin Henderson. “We are glad the military judge saw this issue our way, and we await a thoughtful and just response from senior Navy leadership.”

The Navy said the next steps in the case remain to be seen.

“The Navy is reviewing the court’s ruling and assessing legal options in this case. All future action will be in the best interest of justice,” the Navy said in a statement issued by a spokeswoman.

The decision comes on the heels of another ruling by Stephens last month that statements by the Navy’s top two officers about the Fitzgerald collision constituted apparent unlawful command influence, but not enough to merit a dismissal of the case.

In the December ruling, Stephens found that the chief and vice chief of naval operations had stated on multiple occasions that as commanding officer, Benson was responsible for — or guilty of negligence in — the collision, and those statements “ignored the accused’s presumption of innocence.”

Brennan, who has been following cases related to the separate, deadly collisions of the Fitzgerald and the USS John S. McCain, which left 10 sailors dead in August 2017, said it’s clear that Caldwell compromised his neutral role.

“The guy got out of his role as a judicial officer and joined … the public affairs position,” Brennan said. “He didn’t remember his duty as convening authority, his quasijudicial responsibility.”