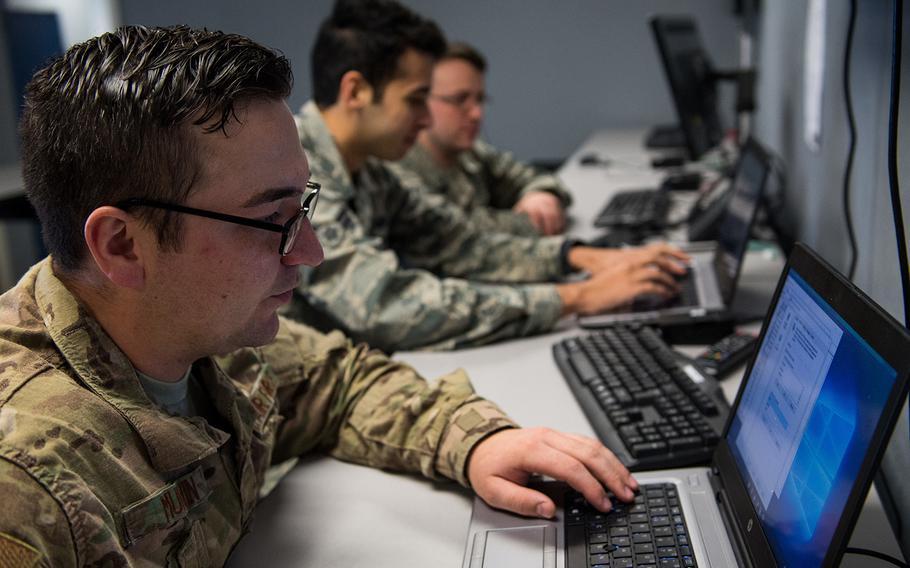 Staff Sgt. Roger Murvin troubleshoots a computer at the hub at Barksdale Air Force Base, La., Dec. 11, 2018. Four congressmen are urging the FBI to investigate “foreign entities” believed to be targeting servicemembers and veterans online with false information. (Tessa B. Corrick/U.S. Air Force)

WASHINGTON — Four congressmen urged the FBI on Tuesday to investigate “foreign entities” believed to be targeting servicemembers and veterans online with false information.

The request for an FBI investigation follows an announcement earlier this month from the House Committee on Veterans’ Affairs, which launched its own review into foreign actors using “shadowy practices” to disseminate false information to veterans, servicemembers and their families.

The committee is in a fact-finding stage and is planning to hold meetings with stakeholders about the issue.

Cisneros, a Navy veteran, is a member of the veterans affairs committee and the House Armed Services Committee. He asked for an FBI investigation “in order to identify and dismantle these cyber threats before they cause harm,” he said.

Vietnam Veterans of America, a congressionally chartered veterans service organization, has been looking into the issue since 2017, when it discovered a Facebook page using its name and logo. The page posted politically divisive posts and was followed by nearly 200,000 people – tens of thousands more than the official VVA page.

Kristofer Goldsmith, associate director for policy and government affairs at VVA, has worked to shut down more fake accounts that target veterans and servicemembers with “divisive propaganda,” he said.

Though the issue has the attention of the veterans affairs committee, Goldsmith argued earlier this month that the FBI needs to become involved to track and identify the people behind the accounts.

“The problem is persistent, widespread, and presents a threat to the force and the veterans community,” Goldsmith said Tuesday in a statement. “We’re glad that Congressman Cisneros and the members are taking this issue seriously, and we hope that Director Wray will too. Depending on social media companies to stop bad-actors is not enough — we need to hold the people behind these fraudulent online avatars accountable.”

A study from Oxford University in 2017 found Russian operatives used Twitter and Facebook to disseminate “junk news” to veterans and servicemembers.

Researchers with Oxford’s Project on Computational Propaganda, which studied how Americans were affected by disinformation campaigns during the 2016 presidential election, found trolls and bots targeted military personnel and veterans with propaganda, conspiracies and hyper-partisan political content. The population of veterans and servicemembers contains “potentially influential voters and community leaders” because of the trust the public places in them, the study states.

In their letter, the four congressmen asked Wray whether the FBI was aware of the problem and if the agency had taken any action to combat it.

“As the federal law enforcement agency responsible for criminal and counterintelligence investigations, we respectfully request answers to our questions below about the Federal Bureau of Investigation’s work to combat such predation,” the letter states.

The Military Coalition — a group of 32 military and veterans organizations that includes VVA, as well as Veterans of Foreign Wars and Wounded Warrior Project — listed cyber protection for veterans and servicemembers as one of their policy goals. The group said it wants to encourage Congress, the departments of Veterans Affairs and Defense to investigate the online targeting of servicemembers and provide training and online protection where necessary.