Christmas in East Berlin: The Iron Curtain is no barrier for St. Nick 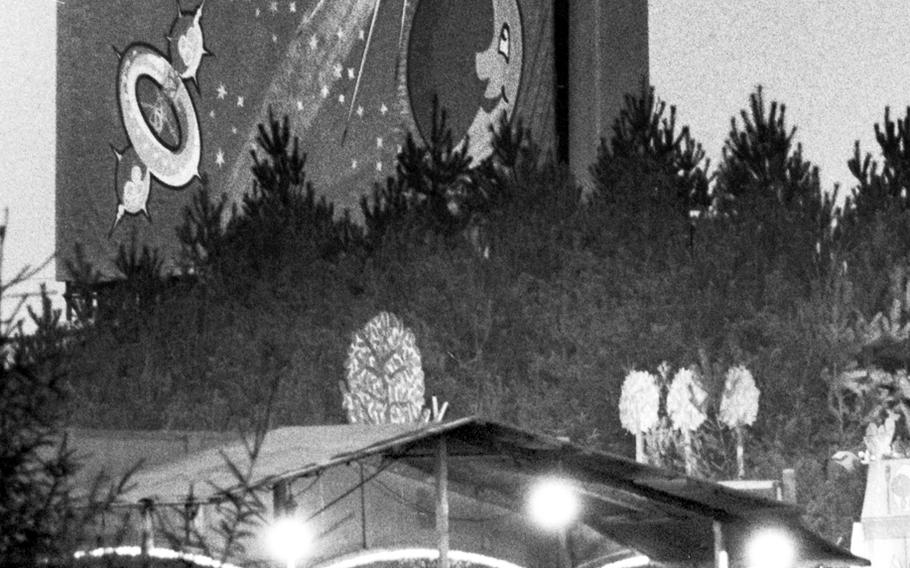 A billboard towering above a Christmas carnival in Berlin's eastern sector reminds shoppers of the Soviet Union's early success in the space race and its proving that "socialism wins." (Gene Bane/Stars and Stripes)

A billboard towering above a Christmas carnival in Berlin's eastern sector reminds shoppers of the Soviet Union's early success in the space race and its proving that "socialism wins." (Gene Bane/Stars and Stripes) 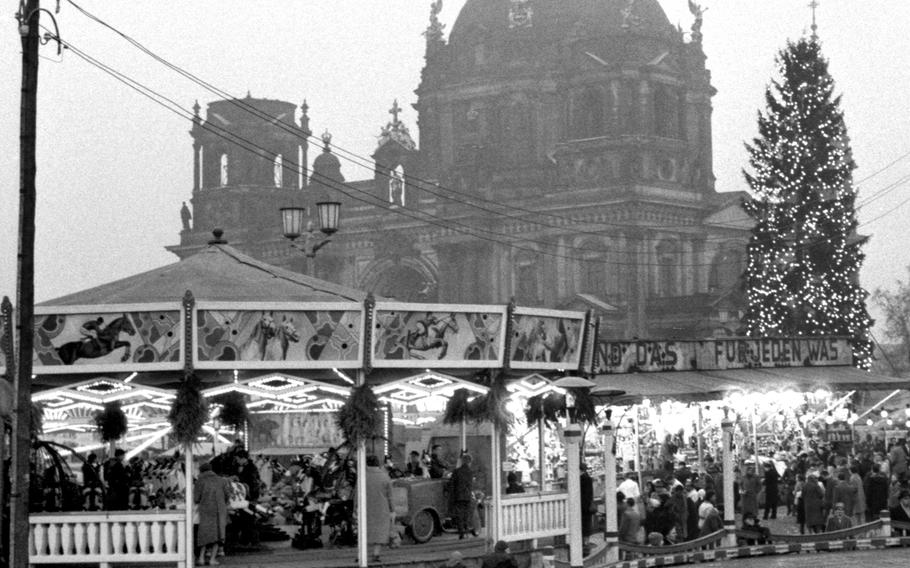 Loudspeakers at the carnival on the Marx-Engels Platz blare popular and classical tunes, but no traditional carols. (Gene Bane/Stars and Stripes) Conflicting theories are represented in a Christmas tree and a sign for the Marx-Engels Bridge. (Gene Bane/Stars and Stripes) SANTA CLAUS may wear a slightly darker shade of red when he visits East Berlin, but the old boy is about as popular there as in the free world.

Despite 15 years of Communist rule, there is every indication that the East Berliners have no intention of giving up their Christmas observance.

Since the Communist state has supposedly replaced religion among all the loyal satellite nations, some of the Iron Curtain areas have ceased to observe religious holidays, including Christmas.

Not so in East Berlin. However, there are some notable differences in the way the Weihnachtsmann is greeted on the opposing sides of the divided city.

For example, you cannot buy a Christmas card on the East Side that contains a printed message linking the holiday greeting to the East German zone not even one reading "Greetings from the People's Democracy," the usual salutation found at border points. Instead, the greetings are restricted to simple phrases such as "Merry Christmas." A clerk in one of the state-owned HO stores explained that the only way you could show it came from the East Zone was by using postage stamps from the zone.

The idea seems to be that, while the Communists may quietly sanction the Christmas observance, they don't want anything circulated to give the impression that they are endorsing it.

At the Marx-Engels Platz, a large square, the East Berliners have set up a Christmas carnival with all the bright lights, thrill rides, and the various booths found at fairs and festivals. Loudspeakers blare classical and popular tunes, but no religious Christmas music.

The carnival area is dominated by two sights. First, there is a giant Christmas tree covered with lights. Second, a towering lighted sign, with drawings of Soviet achievements in the space race, that proclaims the victory of Moscow's brand of socialism over the West.

Still, the East Berliners show just as much enthusiasm (with some notable exceptions) for the Christmas season as their friends and relatives on the other side of town. The stores and streets are crowded with determined shoppers, and the shelves are loaded with everything from $500 tape-recorder consoles to dolls and rocking horses.

Only in certain ways do the shoppers differ from the West Berliners. One marked contrast is the total absence of fashionably-dressed women among the customers in the East Sector, while West Berlin takes pride in being the fashion center of Germany.

Another notable difference is in the number of uniforms. Both men and women in uniform are common on the streets, the uniforms ranging from Russian soldiers on leave to East German army and "people's police" (Vopos).

As for Christmas decorations in general, the East runs a rather drab second. Few lights decorate the outside of the stores, and the only community Christmas tree visible besides the one at the carnival was a rather scrawny number in Alexander Platz, heart of the business district.

And on Stalin Allee, the apartment-street showplace, there was not so much as a sprig of holly visible to mark the season.

Less faithful members of the party provided a lively business for the Christmas tree vendors set up on the many vacant corners in the business district. Stands with table decorations and other colorful greenery did an equally brisk business.

The Christmas spirit even seemed to have prevailed over politics for the moment. Visitors from the West are sometimes something less than welcome in East Berlin, but not at this time of year. Polite smiles abound on all sides, and when The Stars and Stripes photographer asked an East German policeman about taking pictures, the answer was, "But of course. Why not?"

Perhaps the most marked contrast between the two zones comes from the city — or rather two cities — themselves. The shattered hulks of buildings that are still visible on every side in the East have a depressing effect on the visitor, while West Berlin resembles Times Square, noise, traffic jams and all.

There is no question but what East Berlin does offer one advantage for Christmas shoppers — there's never any problem about finding a parking place.