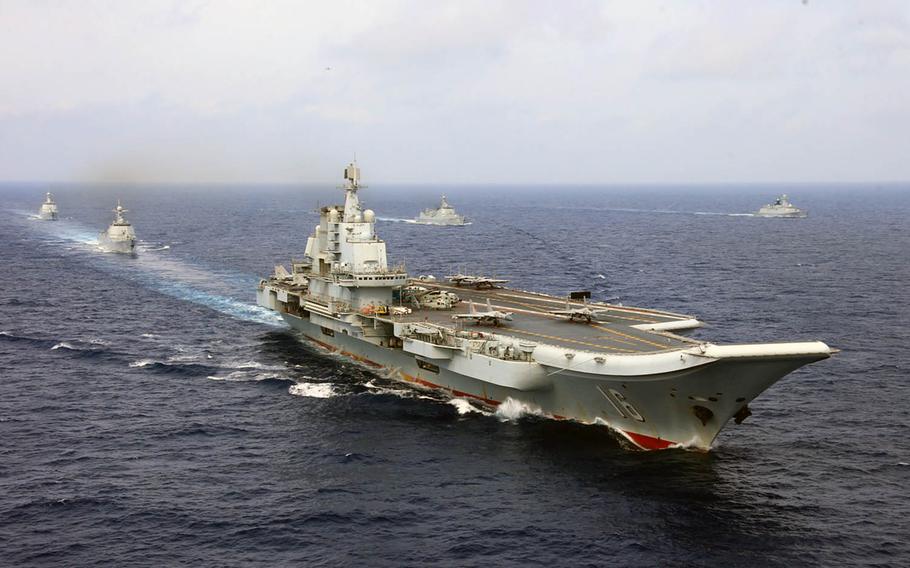 The Chinese aircraft carrier Liaoning with Chinese guided-missile destroyers and frigates took part in a combat exercise in the Western Pacific in April 2018. (Ministry of National Defense of China)

YOKOSUKA NAVAL BASE, Japan — Japan and Taiwan kept watch on the Chinese aircraft carrier Liaoning and its strike group as they steamed through the Miyako Strait and past Taiwan over the weekend, according to the Japanese Ministry of Defense and published reports Monday.

The Liaoning and five accompanying warships passed through the 155-mile-wide strait halfway between the Japanese islands of Okinawa and Miyako on Saturday, turned south and passed east of Taiwan on Sunday, according to reports. The strait is wide enough to qualify as an international waterway.

About 4 p.m. Saturday, the carrier and its group steamed through the strait, according to the official. Some Japanese government spokespersons traditionally speak under the condition of anonymity.

“We continuously checked those ships by the sea and air,” the official said.

The Taiwanese navy also sent ships from Suao to monitor the strike group as it passed the island on Sunday, according to the South China Morning Post, which cited the Taiwan Ministry of Defense.

The six vessels sailed east of Taiwan, according to the Japanese outlet Sankei News, which also cited the Taiwan defense ministry.

The Liaoning is the only aircraft carrier currently in the Western Pacific, however the USS America, a smaller amphibious assault ship that carries F-35B Lightning II stealth fighters, is underway in the East China Sea, according to its official Facebook page.

The U.S. carriers USS Theodore Roosevelt and USS Ronald Reagan are in port, both dealing to some extent with the coronavirus.

The Roosevelt is sidelined in Guam, where much of its crew are undergoing isolation to stem a coronavirus outbreak. The ship meanwhile is being sanitized before it can return to sea.

As of Sunday, 4,309 Roosevelt crewmembers had been tested for the virus, of which 585 tested positive, according to a Navy update. About 400 sailors awaited testing.

The positive cases aboard the Roosevelt account for more than half of the total 890 sailors who have tested positive for the virus across the Navy.

Meanwhile, the Reagan, undergoing maintenance at its homeport of Yokosuka Naval Base since November, is preparing for deployment.

Officials with Task Force 70, the battle force of the 7th Fleet, in a post Sunday to its official Facebook page, said sailors with the task force are undergoing 14 days of sequestration prior to departing on patrol.

More than 1,000 sailors assigned to the Reagan and its accompanying strike group were bussed to Yokota Air Base and Naval Air Facility Atsugi over four days last week to sequester themselves prior to deployment, according to the Task Force 70 post.

“Once 14 days are complete, every sailor will provide a nasal swab sample that will be processed and returned. This process will take an additional 2-3 days before our COVID-free team embarks on Reagan,” according to the post, referring to the disease caused by the virus.

The Navy does not announce its plans for the Reagan and its task force, which includes warships based at Yokosuka.

Guided-missile destroyers USS Barry, USS Mustin, USS McCampbell and guided-missile cruiser USS Antietam have kept the virus from their vessels by remaining at sea or keeping their crews on board while in port. The ships deployed from Yokosuka in February, about a month before the virus grew to pandemic status.

Keeping sailors healthy is “key to our lethality” and ability to be “sentinels ready to respond to crisis,” The Task Force said.