Catholics seek to boost number of priests serving as chaplains 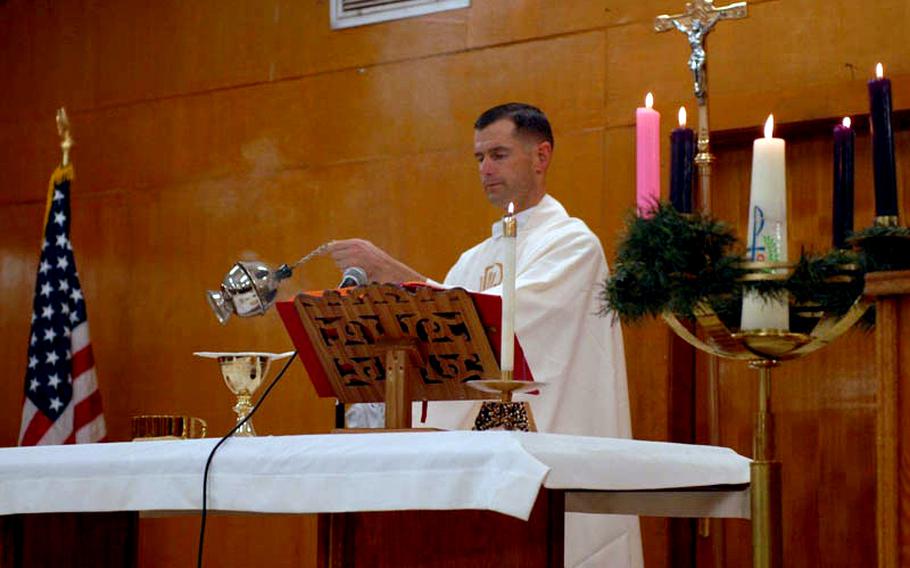 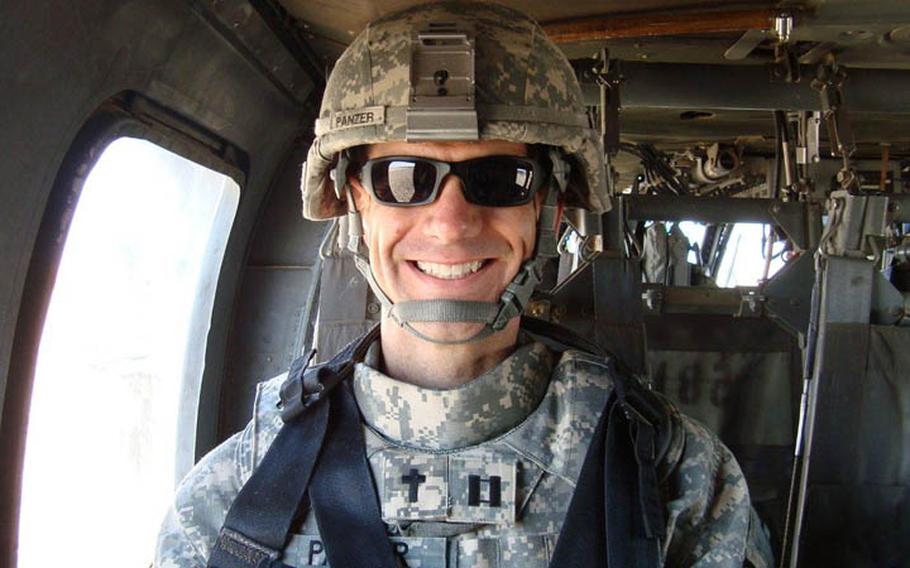 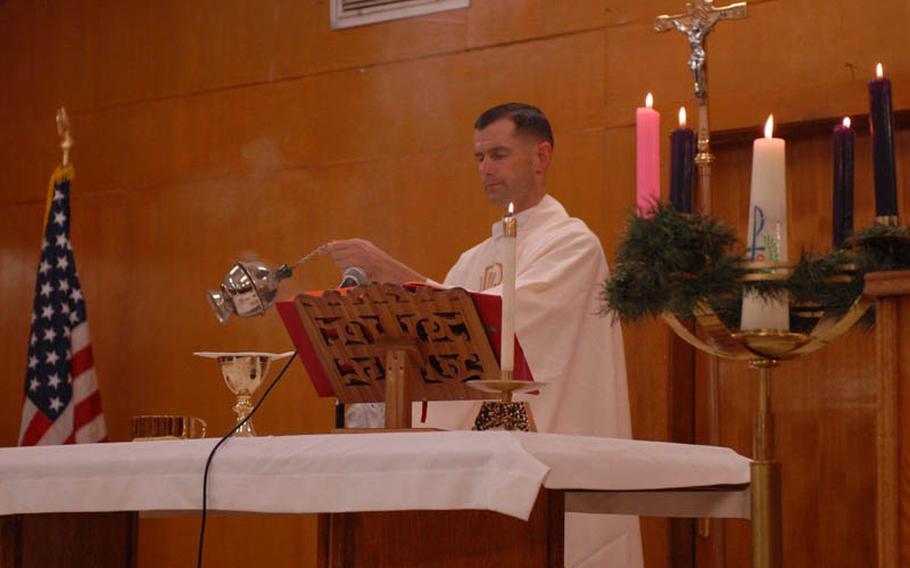 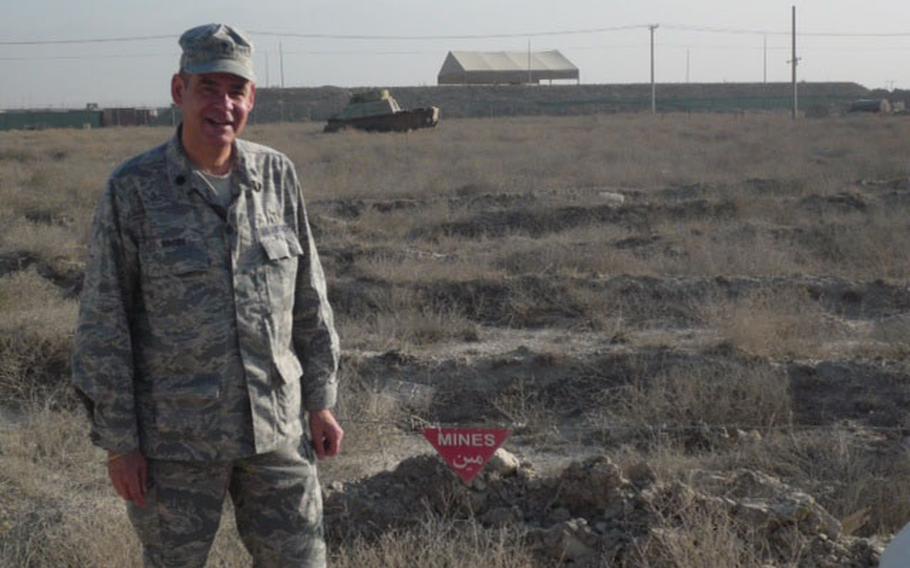 Col. Steven Brosk, a Catholic chaplain in the U.S. Air Force, poses near a mined field in Afghanistan in 2010. (Courtesy of Steven Brosk) 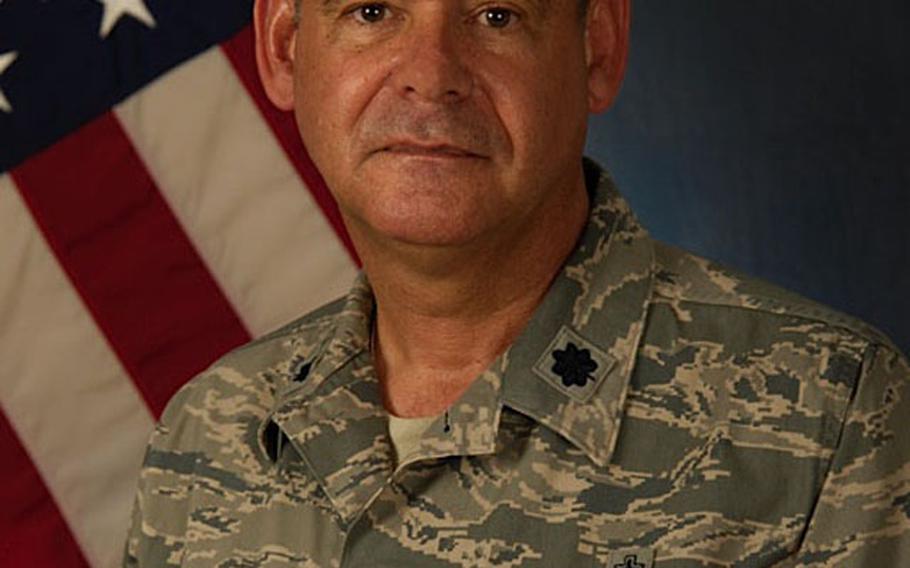 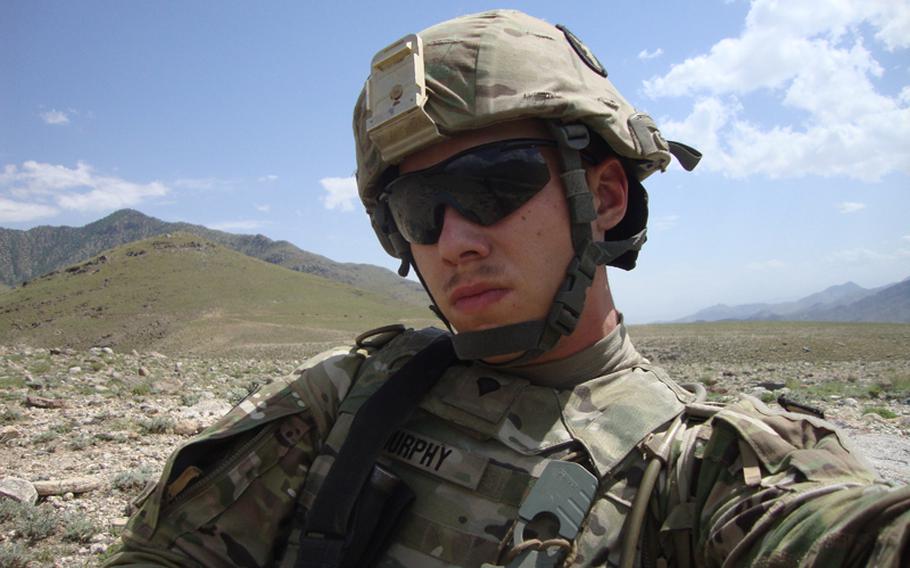 Army National Guard Spc. Joe Murphy, a devout Catholic, found practicing his faith difficult during a recent deployment to Afghanistan because of the scarcity of Catholic chaplaints. (Courtesy of Joe Murphy)

WASHINGTON &mdash; Spc. Joe Murphy&rsquo;s job in Afghanistan was to hunt down the things his fellow soldiers hoped they&rsquo;d never have to encounter.

As part of a route-clearance team that combed the roads connecting Bagram Airfield to outposts in the region, the 23-year-old Iowa National Guardsman gained a close-up familiarity with roadside bombs. Understanding the devices that insurgents have used to kill thousands of U.S. and allied troops in the last decade didn&rsquo;t make them any less terrifying.

Heading out on dusty patrol, Murphy said, &ldquo;You wonder if you might die today.&rdquo;

The threat didn&rsquo;t inspire Murphy to fatalism. Instead, it intensified his longing for the familiar rituals of the Catholic faith he&rsquo;d practiced in weekly Masses since childhood &mdash; confession to a priest, the sacrament of communion and the quiet time spent in prayer and meditation in front of an altar holding the consecrated Eucharistic wafer.

&ldquo;When you are able to go to Mass, it relaxes you,&rdquo; he said. &ldquo;It lifts your spirits no matter what the situation is.&rdquo;

Searching for bombs day in and day out, Murphy needed the reassuring hand of his faith more than ever, but because of a worsening shortage of Catholic chaplains in Afghanistan and throughout the military, it had never been more difficult to practice it.

&ldquo;The only time in Afghanistan I ever saw a priest was on large bases, and I wasn&rsquo;t on large bases very often,&rdquo; Murphy said. He estimated he attended Mass three times during his nine-month deployment in 2010 and 2011.

Catholics, the largest avowed faith group among U.S. servicemembers, have among the lowest availability of chaplains of any religious group in the military. The ratio of practitioners to Catholic chaplains lags far behind other major Christian denominations, as well as Judaism and Islam.

Servicemembers from smaller religious communities &mdash; even those proportionally well-represented &mdash; can have similar difficulty meeting up with their own chaplains because of low numbers dispersed through a vast network of military bases. Nowhere is the problem of access more wide-reaching than among Catholics.

Catholic chaplain numbers have dropped by 46 percent since 2001, likely the result of an overall societal decline of the priesthood. Today, just more than 200 active-duty Catholic chaplains remain, while more than 275,000 active-duty troops identify themselves as Catholic. That number is exceeded only by those who list no religious preference, according to recent Pentagon data.

Defense Department and church officials say a turnaround may be in store in coming years because of a surge of Catholic seminarians committing to chaplaincy. But producing a Catholic chaplain takes nearly a decade of seminary and training, and the numbers are likely to continue to fall in the interim as experienced chaplains reach the mandatory military retirement age of 62.

With the ratio of Catholic servicemembers to Catholic chaplains at nearly 1,300-to-1, the priests in uniform say they are stretched thin and often unable to meet the demands of the troops who need them most.

Lt. Col. Stephen Brosk, 54, a priest and an Air Force Reserve chaplain who served on an air base in Afghanistan at roughly the same time Murphy was in the country, said calls for his priestly help came from all over the region, and not only from Air Force troops.

&ldquo;The Army, the Marines and the airmen &mdash; they all wanted me to come where they were so they could go to Mass,&rdquo; said Brosk, 54. He is now stationed at a U.S. base in the Persian Gulf where he is on his eighth deployment in 10 years.

He made time for them all when he could, but his first responsibility was to airmen, Catholic or not.

&ldquo;There were many, many Army and Marine units that hadn&rsquo;t seen a priest for months at a time,&rdquo; he said. &ldquo;I&rsquo;m part of a faith that places great importance in the sacramental life, and it&rsquo;s hard to be a good Catholic and not practice your faith the way you&rsquo;re taught.&rdquo;

The military shortage reflects broader trends in the Catholic Church, the Pentagon&rsquo;s highest-ranking Catholic priest told Stars and Stripes. Since 1965, the number of priests has declined by 31 percent, according to Georgetown University researchers. That makes local Catholic bishops hesitant to release trained priests who want to become military chaplains, several chaplains told Stars and Stripes.

&ldquo;This shortage is not anything unique to the Army, the Navy or the Air Force,&rdquo; said Maj. Gen. Donald Rutherford, who was appointed Army chief of chaplains in 2010 by former Defense Secretary Robert Gates. &ldquo;It is in society and throughout the world that we have experienced a shortage of Catholic priests.&rdquo;

The Pentagon had more than 400 active-duty Catholic chaplains in 2001, according to the Catholic Military Archdiocese. There were only 216 on active duty at the end of September, according to Pentagon statistics, and the number falls by several priests at every recount.

&ldquo;When I came on active duty years ago, we had 11 priests at Fort Bragg, and we&rsquo;ve got three there now,&rdquo; Rutherford said.

The shortage means Catholics are forced to make do as best they can.

When troops are stationed in the United States, Europe and in democratic countries in East Asia, local priests can often step in. In war zones, the more abundant Protestant chaplains often shoulder the load, said Army Capt. Joel Panzer, 43, a Catholic battalion chaplain recently stationed in southern Iraq. He spoke to Stars and Stripes in December shortly before the last U.S. troops left the country.

Panzer said he doesn&rsquo;t worry about proselytization of his Catholic troops; chaplains take seriously their obligation to help troops practice their own religions, regardless of creed.

&ldquo;I&rsquo;ve heard that a few years ago there were some Bible fundamentalists who were working a little too aggressively to pull people into their fold,&rdquo; he said. &ldquo;I have not witnessed that myself. They really amaze me with the concern they show ... that Catholic soldiers have support in practicing their faith.&rdquo;

Panzer wants to make sure deployed troops also have regular access to the Catholic rites that many hold dear. So throughout his two 13-month deployments, he relentlessly traveled.

&ldquo;On my first deployment here, we would take four armored Humvees and I&rsquo;d go out and say Mass,&rdquo; he said. &ldquo;As IED incidents became more common, we switched to MRAPs. But, basically, for the past month or so, I have gone strictly by air, because the bases are becoming very few and the distances between them are too great.&rdquo;

He&rsquo;s not complaining. In fact, Panzer suspects a partial solution to the Catholic chaplain shortage is selling the sometimes dangerous, sometimes lonely and often tiring work of military chaplaincy to civilian priests as a kind of clerical boot camp.

&ldquo;A priest who serves as a chaplain for even just a few years will find himself stronger, both physically and spiritually, for having accepted the call,&rdquo; he said.

The real hope of turning the shortage around lies in a rising number of seminarians who want to enter military ranks, Rutherford said.

The number of Catholic seminarians committed to chaplaincy has exploded, with 31 enrolled in the current academic year, he said. In the 2008-09 academic year, there were three candidates nationwide, according to the Military Archdiocese.

Much of the credit goes to a scholarship program overseen by the Rev. Kerry Abbott, vocations director for the archdiocese and a former Air Force chaplain.

The program is essentially a 50-50 deal between local bishops and the Military Archdiocese, with each side covering half the cost of seminary tuition. After ordination, the newly minted priest works for several years at a local diocese before joining the military and serving as a chaplain until retirement. The local bishop then gets a highly experienced priest back, presumably at the height of his pastoral abilities.

Although the number of potential chaplains has skyrocketed since he took over the job, Abbott attributed it to a revival among the Catholic faithful rather than his own work.

&ldquo;I see the trend changing for the military,&rdquo; he said. &ldquo;It is a reflection of what I see within our society as a whole, of more men saying, &lsquo;Lord, send me.&rsquo;&thinsp;&rdquo;

Murphy, who says he could redeploy to Afghanistan with the Iowa Guard within a year, hopes one day Catholic chaplains are abundant enough that, like Protestants, some are stationed in hot spots where troops are fighting and dying.

&ldquo;Spiritually, it&rsquo;s a big help to see them,&rdquo; he said. &ldquo;It makes me a better soldier.&rdquo;