Carter to Islamic State: Raqqa is next target 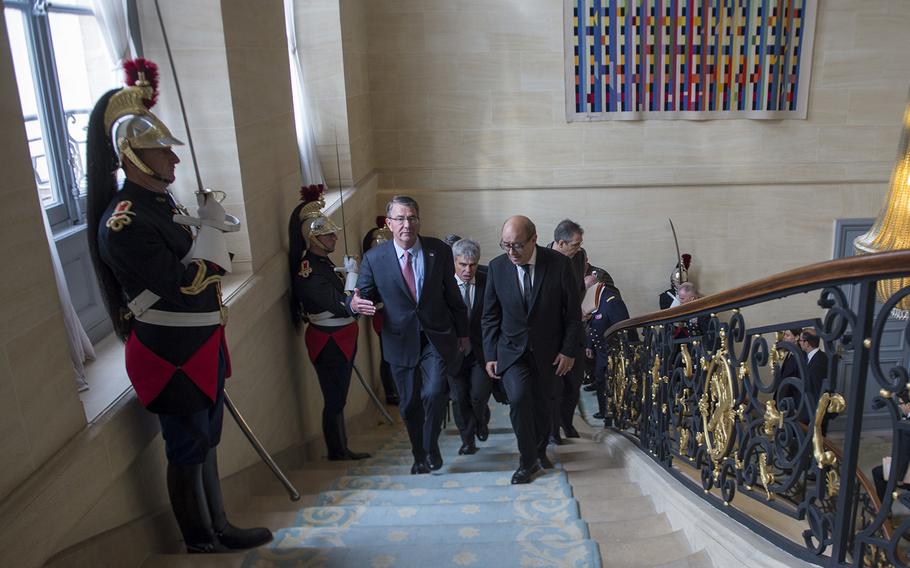 PARIS — Initial operations to retake the Islamic State group’s capital in Raqqa, Syria, are underway and likely to overlap with the assault launched 10 days ago to drive the terror group out of Mosul, Iraq, Defense Secretary Ash Carter said Tuesday.

“We’ve already begun laying the groundwork with our partners to commence the isolation of Raqqa,” said Carter, who was in Paris to meet with his French defense counterpart Jean-Yves Le Drian and 11 other coalition defense ministers.

“The next step is Raqqa,” Le Drian said, declining to go into detail.

The Pentagon has long hinted that the assault on the two de facto capitals of the Islamic State group would occur simultaneously, but in recent weeks most of its pronouncements have been focused on the Iraqi security forces’ readiness to retake Mosul.

Mosul operations launched 10 days ago, with 18,000 Iraqi Security Forces and 10,000 Kurdish Peshmerga fighters closing in on the eastern, southern and northern borders of the city. The Islamic State group still controls the western region of the city. In preparation for the assault, the coalition sharply increased the number of airstrikes it conducted in and around the city – using U.S. special operators and U.S. and coalition air power to target more than 35 Islamic State group commanders, Carter said Tuesday,

A senior U.S. military official who spoke on the condition of anonymity said that while there is benefit to overlapping the two operations, the coalition needs to generate additional local ground forces in Syria before launching a main assault in Raqqa.

The official also said that due to the size and complexity of the initial attacks on Mosul, it was better not to have the two operations launching simultaneously, because of the strain it would put on the coalition assets, such as strike aircraft, surveillance aircraft and refuelers.

"Mosul is in a very challenging phase," the official said.

During a trip Sunday to Irbil to assess the Mosul operation, Carter said that there would be some overlap between the two campaigns.

“We’ve long anticipated that and we are prepared for that,” he said.

The Pentagon's believes that much of the Islamic State group's ability to launch external atacks on western targets is generated out of Raqqa.

"Raqqa is the nexis of much of their operational planning," the official said.

Europe has been concerned that as Mosul falls, Europe will bear additional terrorist attacks if Raqqa is not attacked at the same time.

France has been a repeat target. In January 2015, two gunmen forced their way into the Paris offices of the satirical weekly newspaper Charlie Hebdo and opened fire, killing 12. In November, the Islamic State group attacked Parisian cafes and a nightclub, killing 130. In July, a truck was driven through crowds celebrating Bastille Day in Nice, killing 86.