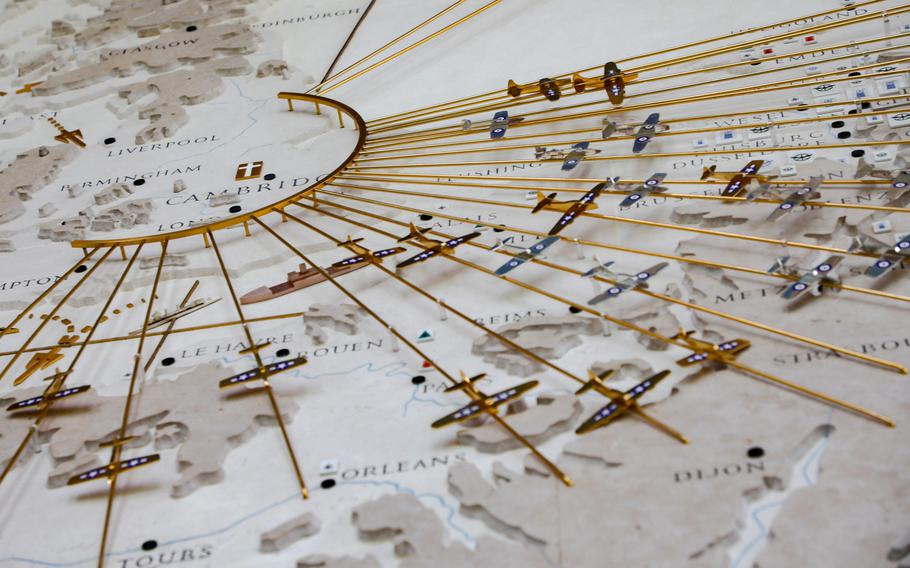 Buy Photo
Detail shot of the giant map of the air campaign of Europe Aug 12, 2019, in the Memorial Chapel on the Cambridge American Cemetery. (Christopher Dennis/Stars and Stripes) Buy Photo
Visitors with a tour walk past the reflection pool on the Cambridge American Cemetery grounds. (Christopher Dennis/Stars and Stripes) 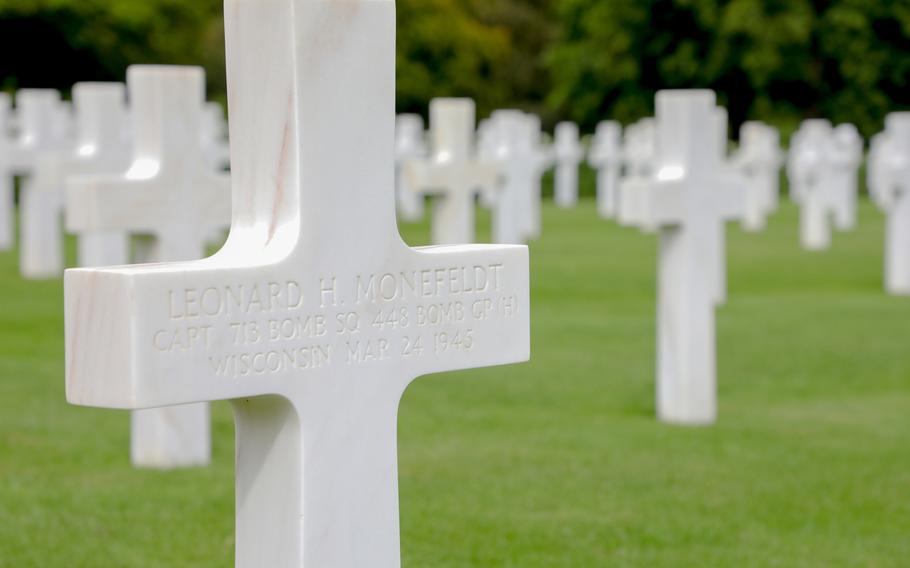 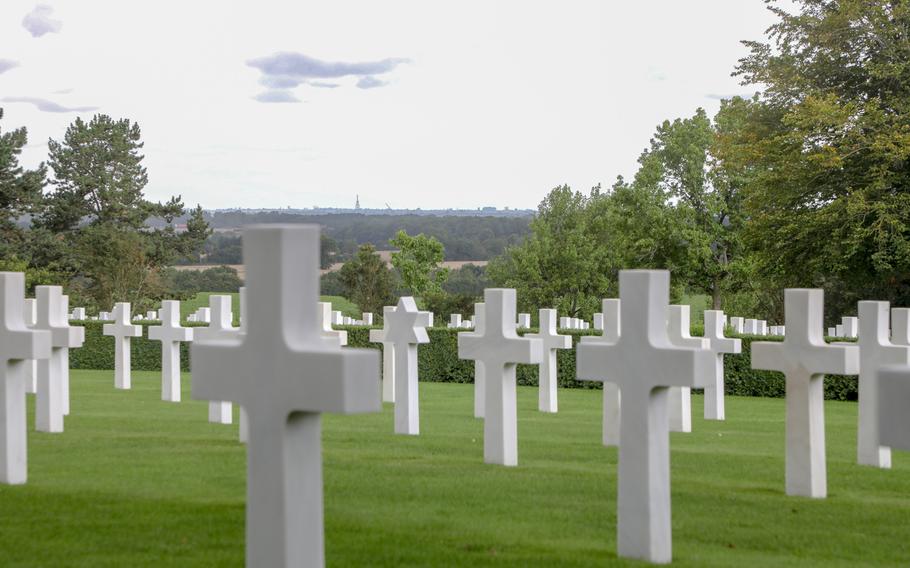 Buy Photo
Visitors listen to a tour guide at the Wall of the Missing on Aug. 12, 2019, on the Cambridge American Cemetery grounds. (Christopher Dennis/Stars and Stripes)

It drew my curiosity partly because it reminded me of Arlington National Cemetery, and history, especially from World War II, always intrigues me. Cambridge American Cemetery is one of two U.S. military cemeteries in Britain and is part of the American Battle Monuments Commission.

The grounds are laid out in a quarter-circle wedge with the entrance, visitor center and flagpole at the narrow-ended tip. Marble white crosses and Star of David markers are spread out on the cut grass across the hillside, which offers a view of distant towns and the English countryside. The church bells from the local village of Coton can be heard across the field.

To the right, as you enter, you’ll see the Walls of the Missing, the reflecting pool and the memorial chapel. Going left will lead you on a path to the visitor center, which contains pictures, interactive movies from World War II and memorabilia from the era, such as magazines and aircraft propellers.

The land was donated in 1943 by the University of Cambridge, with the first servicemember interred in the new cemetery on Dec. 7, 1943.

The grounds once held the graves of 10,000 servicemembers. But after families were given the choice of repatriating their relatives, most were returned to the U.S. The cemetery now holds 3,811 graves, with another 5,127 names etched into the Walls of the Missing for those who were never recovered.

The majority of servicemembers laid to rest here are from the Battle of the Atlantic, in which about 3,500 merchant ships and 175 Allied warships were sunk. Most of the other casualties are from the strategic air bombardment of Europe, when the U.S. joined Britain in the air war.

Some notable names at the cemetery are the crew of the USS Reuben James, the first American warship sunk in European waters, and Joseph P. Kennedy Jr., brother of the late President John F. Kennedy. The big band musician and composer Glenn Miller, who vanished in an aircraft flying from England to France to entertain troops, is listed on the Walls of the Missing.

While walking around the visitor center, I met an English couple who said they had come to the cemetery after visiting Cambridge.

Rowland Blake, 74, from the town of Wymondham which had housed the 389th Bomber Group at RAF Hethel, said he kept coming because the cemetery represented a connection to his parents’ generation.

He shared stories from them, about how U.S. bombers would light flares as they approached the base to indicate the number of injured on board, so the ambulances would be ready.

Or how when he was 8 years old, his father pointed out a low-flying Constellation troop transport that was having mechanical problems. It executed a successful emergency landing at the nearby air base because the navigator remembered the town’s unique double-towered abbey from his service there during the war, Blake said.

TIMES: The cemetery and visitor center are open to the public daily and on most host-country public holidays from 9 a.m. to 5 p.m. The cemetery is closed on Dec. 25 and Jan. 1.