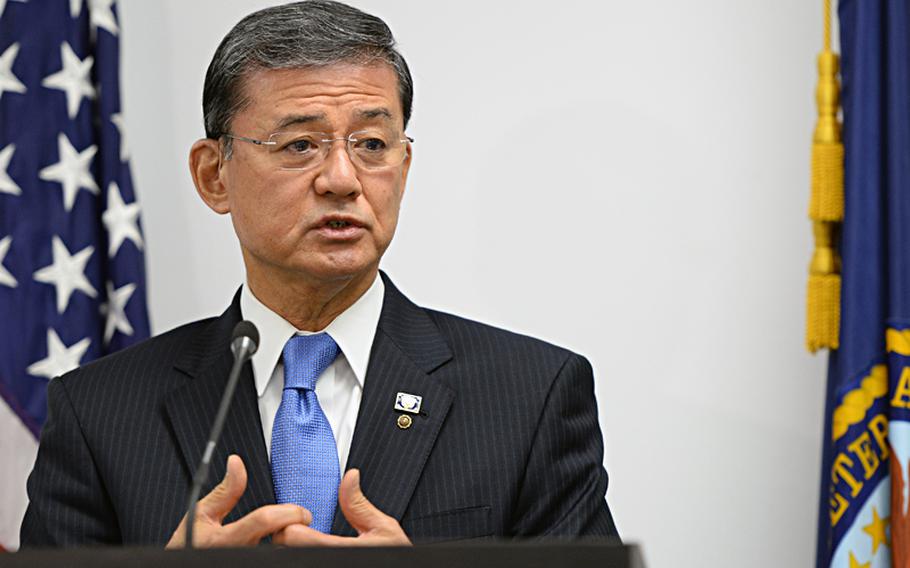 WASHINGTON — Embattled VA Secretary Eric Shinseki faced a growing chorus of calls for his resignation following a detailed and scathing report from his own inspector general that found that veterans in Phoenix waited an average of 115 days for an initial doctor visit.

Coming soon after a whistleblower in Phoenix claimed that “secret” waiting lists might have contributed to the deaths of 40 veterans there, the Veterans Affairs IG released an interim report Wednesday with still more stinging revelations, including that scheduling staffs at as many as 42 VA hospitals nationwide are using “gaming strategies” to hide long delays in care.

Soon after, Sen. John McCain, who until yesterday had urged a wait-and-see approach, called for Shinseki to step down.

Everyone has a VA hospital story. Tell us yours for use in a possible Stars and Stripes story. Leave yours in the comments below or email croley.tina@stripes.com.

“I haven’t said this before, but I think it’s time for Gen. Shinseki to move on,” the Arizona Republican said during an interview on CNN.

“I was going to wait for the hearing that’s going to take place here very soon. But this keeps piling up.”

At least 58 members of Congress, 20 of them Democrats, now have called on Shinseki to resign.

McCain and Walsh are the Senate’s only combat veterans.

“The Inspector General’s report is so troubling that I have come to the conclusion that the Department of Veterans Affairs needs new leadership. I believe it would be in the best interest of veterans for Secretary Shinseki to step down,” Franken said in a statement.

“The question I ask myself is, ‘Is him resigning going to get us to the bottom of the problem?” Boehner told reporters Thursday. “Is it going to help us find out what is really going on?’ And the answer I keep getting is no.”

Boehner stressed instead that the VA’s problems are the responsibility of the president.

“The real issue here,” Boehner said, “is that the president is the one who should be held accountable.”

The American Legion was the first major veterans organization to call for Shinseki’s resignation.

On May 5, Legion commander Daniel Dellinger said Shinseki and other top department leadership should step down following reports of delays and neglect at VA health centers around the nation.

Soon after, President Barack Obama, in a televised address, offered what many felt was tepid support for Shinseki. Asked if Shinseki offered to resign, Obama would only say that the secretary “cares deeply about veterans and he cares deeply about the mission, and I know that Rick’s attitude is if he doesn’t think he can do a good job on this and if he thinks he’s let our veterans down, then I’m sure that he is not going to be interested in continuing to serve.”

NBC News late Thursday morning was reporting that Shinseki’s resignation was a question of when and not if, and that the White House was already considering replacement candidates.