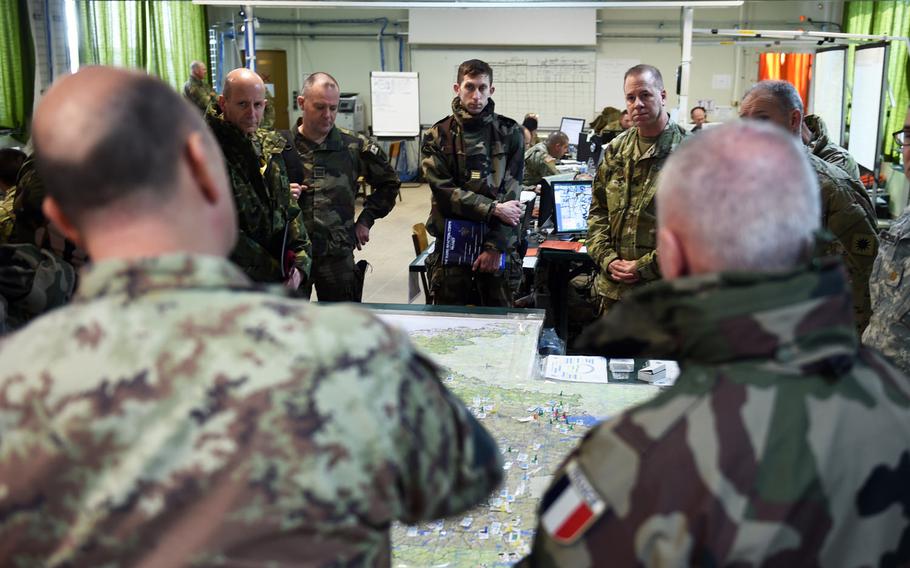 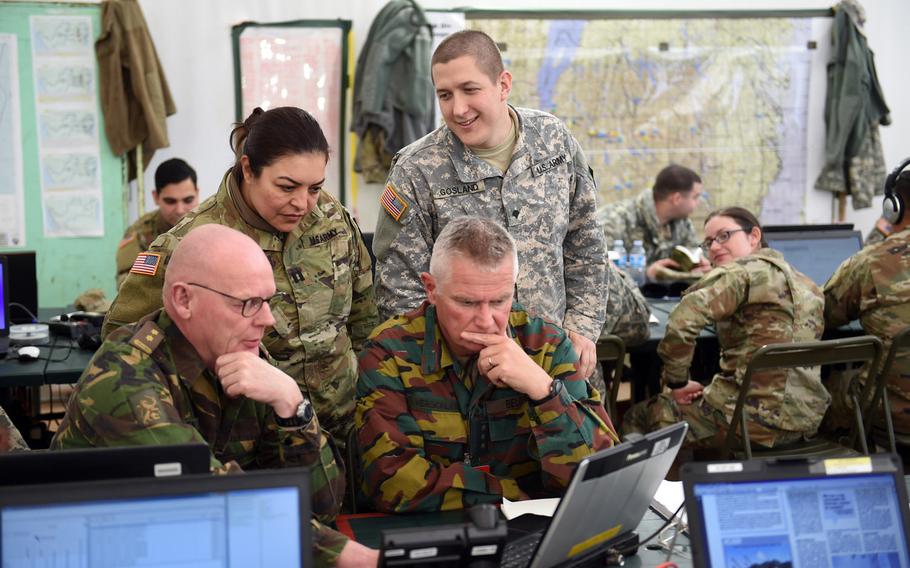 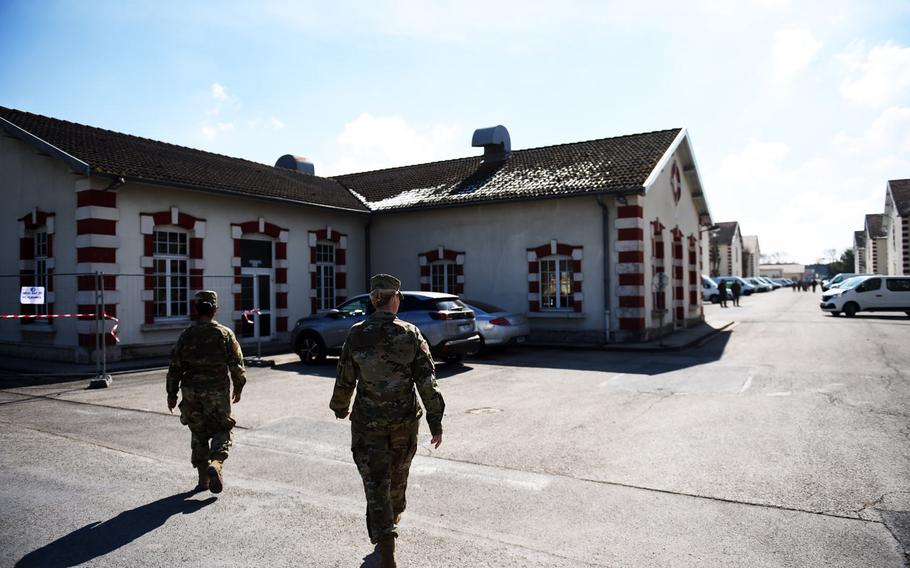 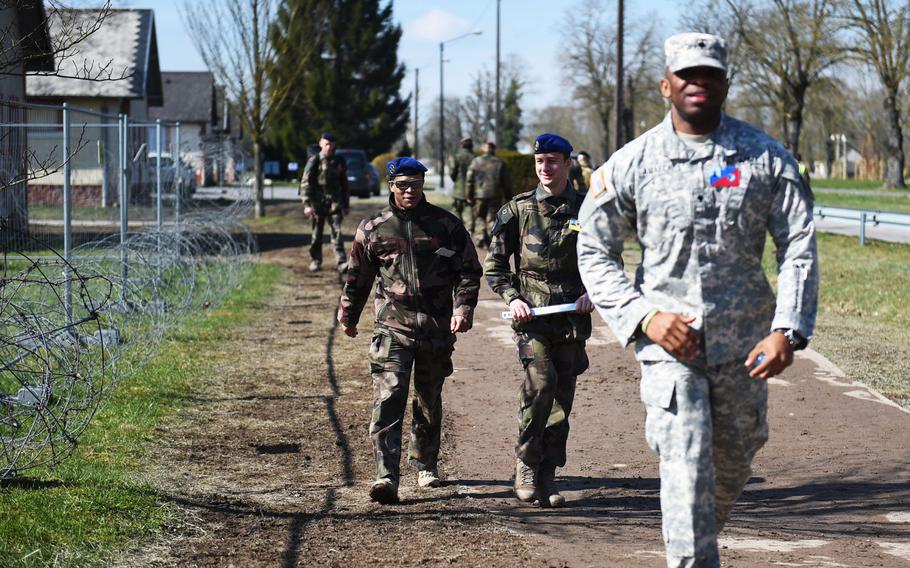 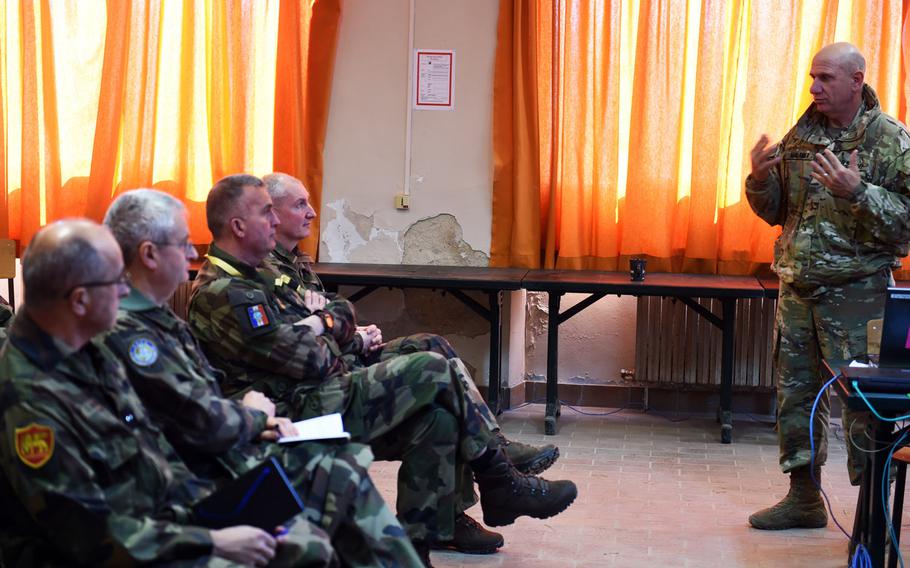 MOURMELON-le-GRAND, France — After a tyrannical governor declares his state an independent country, terrorist groups spring up all over Northern Europe, while chemical attacks and fuel dumps set ablaze become the norm.

It’s up to the California National Guard and its NATO allies to quell the violence in the fictitious Scandinavian nation of Arnland, during Exercise Citadel Guibert this week.

It’s as realistic a tabletop drill as possible, but with the welcome addition of a few creature comforts: namely, some multicolored, pillowy macarons.

“It’s been kind of funny to see such serious soldiers, dealing with intense situations, while nibbling on delicate, little French pastries,” Army spokeswoman Maj. Cara Kupcho said Wednesday. “One great thing about this being in France, is we have good coffee available, and the French just flood the place with amazing cookies.”

In a few months, simulations and haute cuisine will give way to deployment in Afghanistan for many of the 200 40th Infantry Division guardsmen working in this NATO exercise, commanded by the French Rapid Reaction Corps not far from the World War I battlefield of Verdun.

The drill is designed to prepare the 1st French Division, which heads to Africa this summer, and the guardsmen for the decisions they might face in a combat zone complicated by asymmetrical warfare and political instability.

“This reflects the world we live in,” said French exercise commander Lt. Gen. Thierry Corbet. “(Troops) have to be able to lead operations in a context of a host nation internal crisis as well as in a high-intensity environment, and they have to be ready to (face) a robust and possibly hybrid enemy, and work in close coordination with the host nation.”

The scenario started with conventional warfare but quickly moved into putting down riots, and stopping insurgent attacks aimed at discrediting and driving away the NATO team.

“I think there are a lot of parallels to what’s going on in Afghanistan,” said Lt. Col. James Lamb, an intelligence officer at the exercise. “The militias we’re facing have different agendas. They aren’t one coherent enemy and each is trying to achieve a different goal.”

Identifying and taking out insurgent groups was a challenge for the multinational task force. For U.S. soldiers, learning about communications pitfalls among allies has been particularly enlightening.

“It’s a little frustrating when we want to eliminate an enemy target,” said fires support coordinator Lt. Col. Vincent Salazar. “If we were operating on our own, once we confirm that they are the enemy, and we get the approval to engage, we can take them out.

“But here, when we report an enemy, they might assign soldiers from one of our allies to take them out. That’s fine, and I’m sure they’re making the right call, but sometimes they don’t tell us what happened to them. And we want to know if the enemy sniper is still there, if the (bomb) factory is still functional. We’re used to engaging our own targets.”

The soldiers also spoke with media actors and met with leaders of the fictitious country.

Linda Rose Smit, a role player who portrayed several of Arnland’s governors, said she did not make it easy on the NATO forces.

“I have to make it real for me and really live in Arnland during the exercise,” Smit said. “That way, when I deal with the Americans or French, they are immersed in it.”

Capt. David Majestic, a supply officer with the 40th Infantry Division, said he thought the exercise would help his unit in Afghanistan.

“I’ll be doing sort of the same thing there as I am here,” Majestic said. “And all this work with our NATO partners is great for us to learn how to operate coherently.”

It wasn’t all insurgent attacks and angry governors though. Guardsmen took advantage of a day off to see Paris and other parts of France.

“Some of our soldiers never left the country before this,” said Col. Michael Leeney, the division’s chief of staff. “A lot never even left California. For a young soldier to come here, and experience Europe like this, it’s a once-in-a-lifetime opportunity.”

Training so close to famous battlefields turned up unexpected surprises for the Californians.

“When we visited one of the (WWI) cemeteries, one of the first graves we saw, was from a soldier with the 40th Infantry Division,” Leeney said.

Knowing their unit fought in this area 100 years ago, the guardsmen found another grave from a soldier with their division within minutes.

“It was kind of eerie to find them there,” Leeney said. “But it shows you the kind of history our division has, and exemplifies the strong bond we have with our allies around the world.”