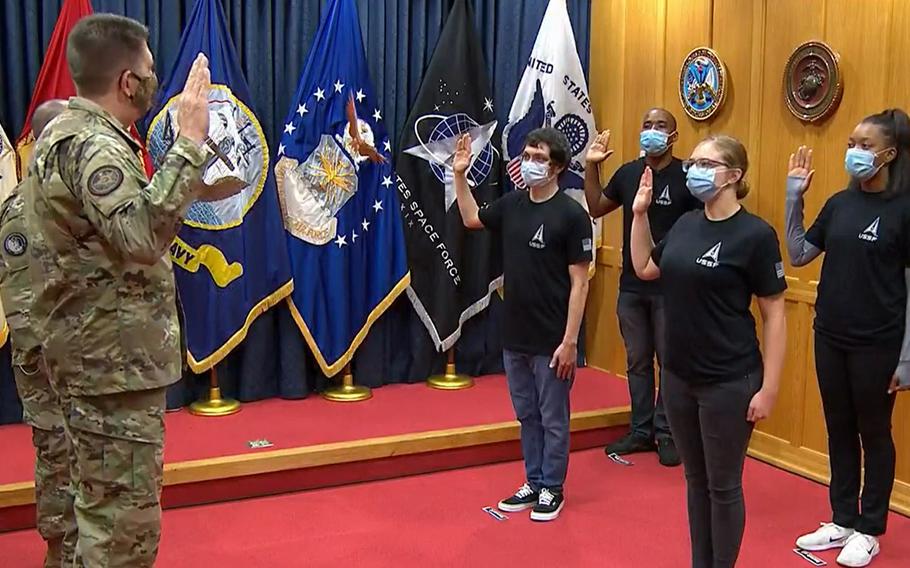 Space Force has roughly 2,000 “space professionals” serving. Until now, all the branch’s members were transfers from the Air Force. These new recruits are the first service members to enlist directly into Space Force.

“Today is an important milestone as we stand up the Space Force,” Thompson said in a statement. “Until now, we’ve been focused on building our initial ranks with transfers from the Air Force. With these new recruits, we begin to look to the future of our force by bringing in the right people directly to realize our aspirations of building a tech-savvy service that’s reflective of the nation we serve.”

“Space Force leadership has previously stated diversity among its ranks is one of its priorities in standing up the new service,” according to a service statement.

Among the recruits, two are women and five are men, and two are Black and five are white. They are from Colorado, Maryland, and Virginia, and range in age from 18 to 31.

After being sworn in at Baltimore Military Entrance Processing Station at Fort Meade, Md., all seven are bound for seven and a half weeks of basic training at Air Force basic training, which is located at Lackland Air Force Base in San Antonio.

There are no Space Force recruiting stations yet. Kirby said the Air Force is recruiting for both branches. Space Force hopes to recruit 300 enlisted service members in 2021 and to have 6,500 members overall in a year. Most will come from Air Force transfers.

“We’re excited to see this happen,” said Chief Master Sgt. Roger A. Towberman, senior enlisted adviser for Space Force. “The Air Force team at basic military training has been outstanding and deserves most of the credit for making this happen quickly. To watch these first Space Force recruits take their oath for the first time is something I will never forget. They are the future, and it’s incredible to be in their service!”