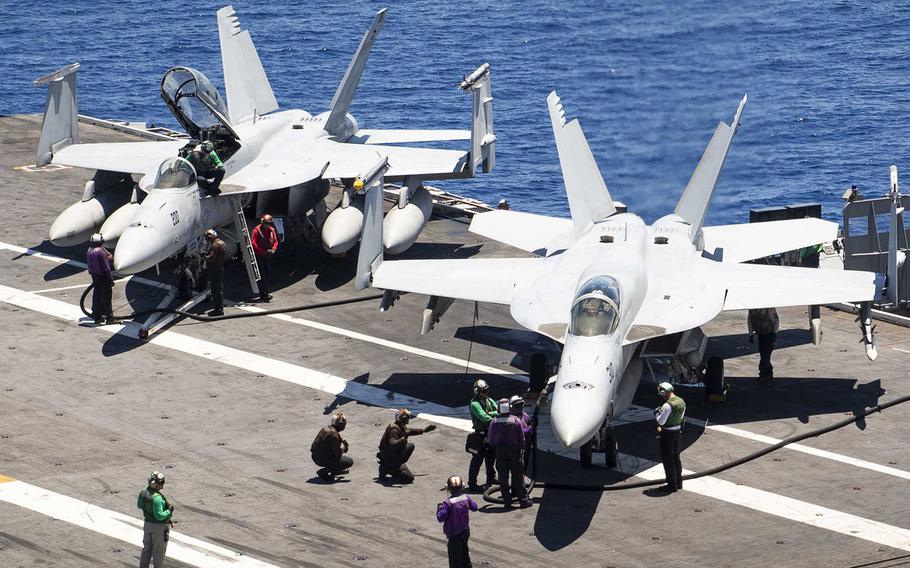 In a July 31, 2019 photo, sailors pre-check F/A-18 Super Hornets prior to flight operations on the flight deck of the USS Harry S. Truman during training in the Atlantic Ocean. (Isaac Champlain/U.S. Navy)

WASHINGTON — The repairs to the USS Harry S. Truman are completed, nearly three months after the aircraft carrier returned to Norfolk, Va., for an electrical malfunction, the Navy announced Tuesday.

The repairs delayed the Truman from taking part in a planned deployment in September, according to USNI News.

During a pre-deployment exercise in late August, the Truman experienced the electrical malfunction, forcing the ship to return to Norfolk, USNI News reported at the time.

Damaged components were replaced and tested to make certain there were no additional issues, according to the Navy. They also determined the problem was limited to the Truman and no other Nimitz-class ship.

While the Truman was undergoing repairs, its escort ships, which include destroyers, deployed in September without the aircraft carrier. Those ships are now escorting the USS Abraham Lincoln aircraft carrier in the Persian Gulf, according to USNI News. The Lincoln had its own deployment extended for an unknown length of time because the Truman was not available to replace it, The Virginian-Pilot reported last month.

The Lincoln, which had been making its way across the world towards its new homeport in San Diego, Calif., has been in the Middle East since May, when U.S. Central Command requested the aircraft carrier deploy to the region early due to rising tensions with Iran.

Now that the Truman is repaired, “every effort is being made to make the carrier, air wing and sailors operationally ready to deploy,” the Navy said in its statement. The service did not say how soon the ship would deploy.