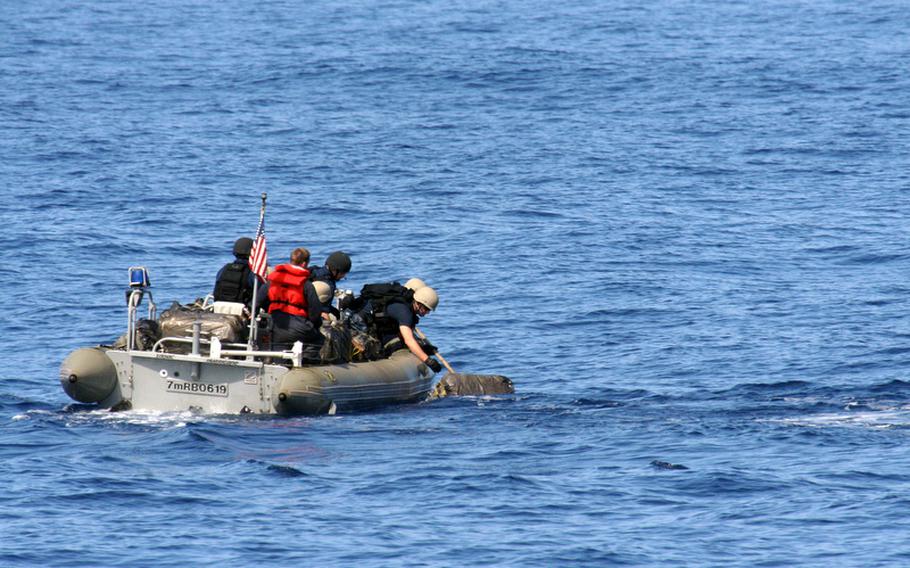 Sailors in a rigid hull inflatable boat from the guided-missile cruiser USS Princeton retrieve what turned out to be a bale of marijuana in the Pacific Ocean off California on June 16, 2012. Three vessels dumped 18,600 pounds worth of marijuana after being spotted by the USS Nimitz, which was conducting carrier flight qualifications at the time. (Courtesy U.S. Navy)

Nimitz was conducting carrier flight qualifications off the California coast Saturday at 1:53 p.m., when sailors spotted two vessels about four miles away, according to a Navy news release Tuesday.

When a Seahawk helicopter already in the air went for a closer look, two 25-foot vessels sped toward the coast and began dumping large, black trash bags, which were found later to contain 100-pound bales of marijuana.

About three hours later, the Nimitz&rsquo;s officer of the deck spotted another small craft, which began dumping its cargo after realizing it had been spotted by air, the release said.

The nearby cruiser USS Princeton sent sailors in rigid hull inflatable boats to retrieve several dozen bales; a Mexican navy ship arrived and helped secure the remainder of the 186 bales of marijuana recovered that day.

The marijuana was subsequently transferred to the Coast Guard cutter Edisto, according to the Navy news release.