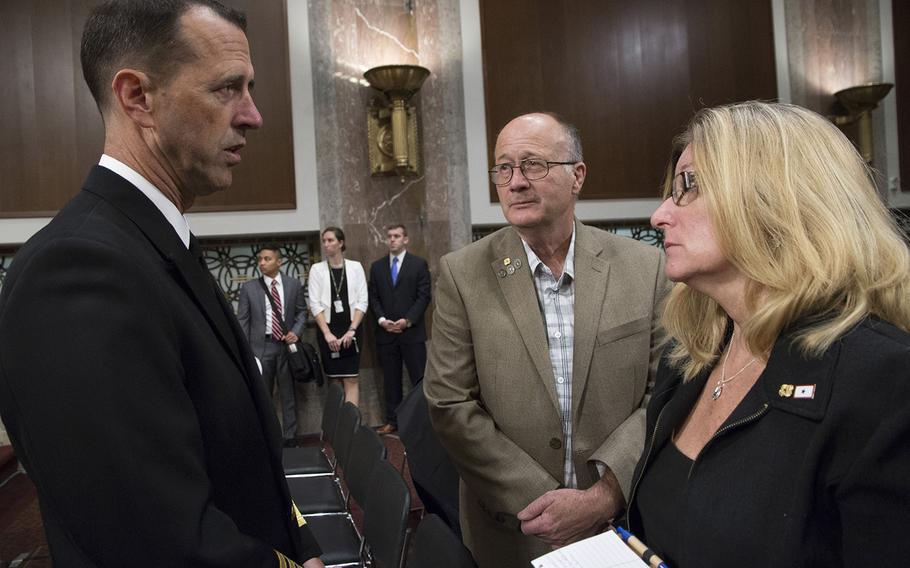 Chief of Naval Operations Adm. John M. Richardson talks with Sid and Theresa Palmer of Decatur, Ill., parents of Petty Officer 3rd Class Logan Palmer, before a Senate Armed Services Committee hearing on Capitol Hill, Sept. 19, 2017. Logan Palmer was one of 10 sailors who died in a collision between the USS John McCain and a tanker near Singapore on August 21. (Joe Gromelski/Stars and Stripes)

Chief of Naval Operations Adm. John M. Richardson talks with Sid and Theresa Palmer of Decatur, Ill., parents of Petty Officer 3rd Class Logan Palmer, before a Senate Armed Services Committee hearing on Capitol Hill, Sept. 19, 2017. Logan Palmer was one of 10 sailors who died in a collision between the USS John McCain and a tanker near Singapore on August 21. (Joe Gromelski/Stars and Stripes) 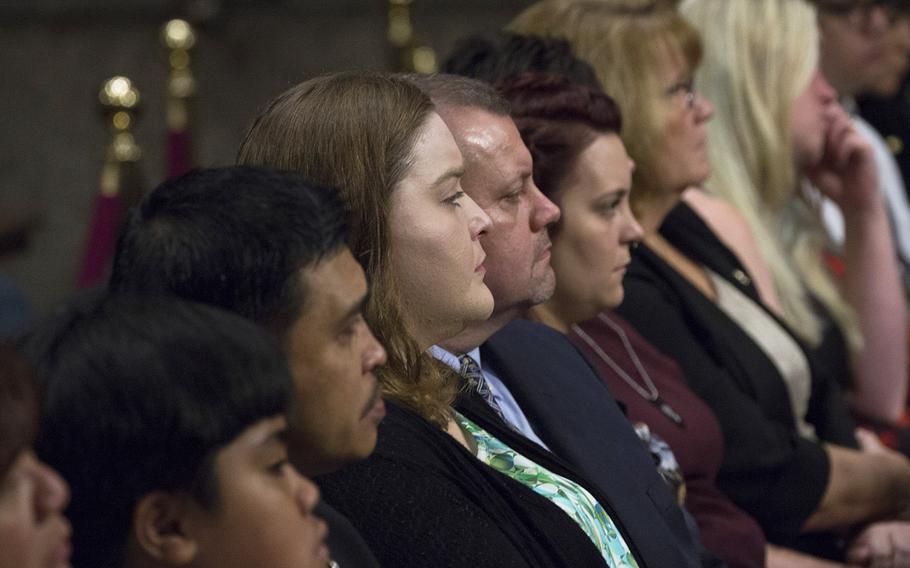 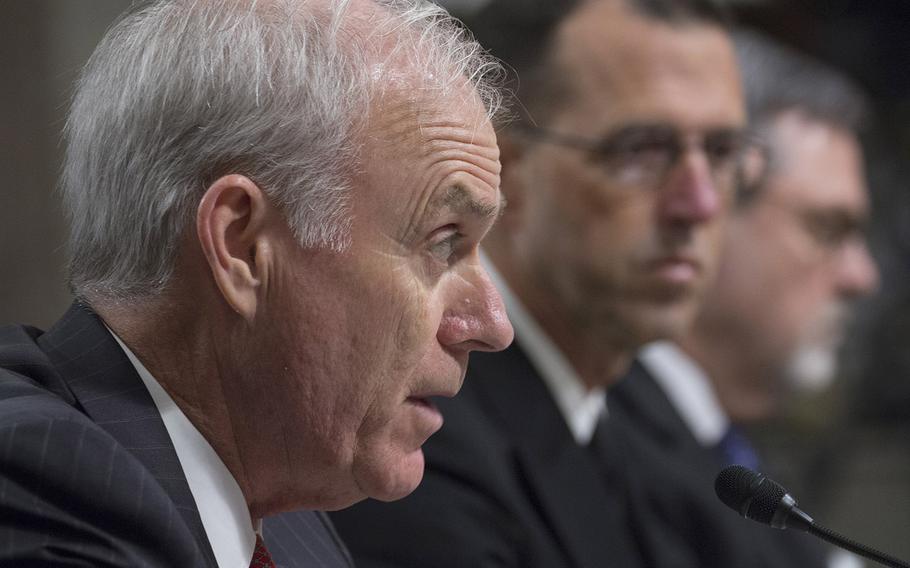 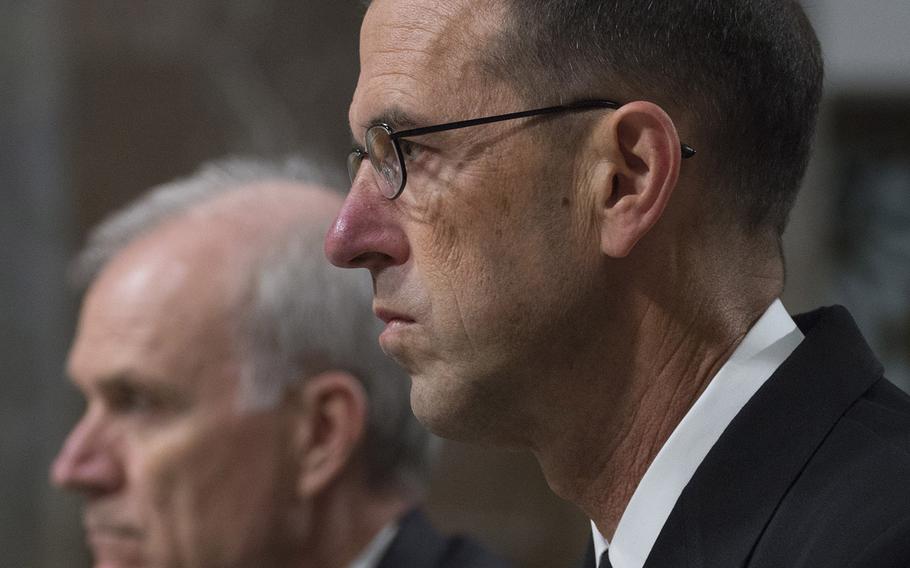 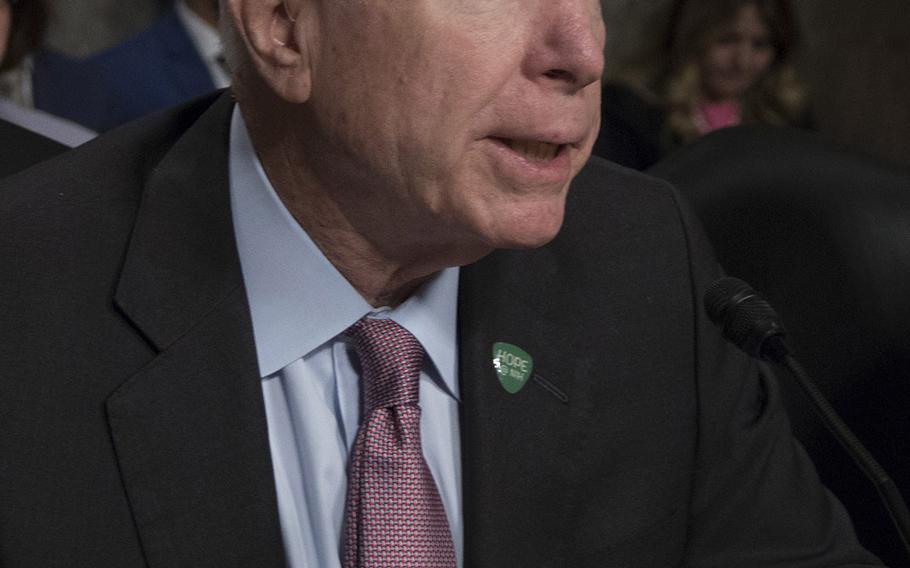 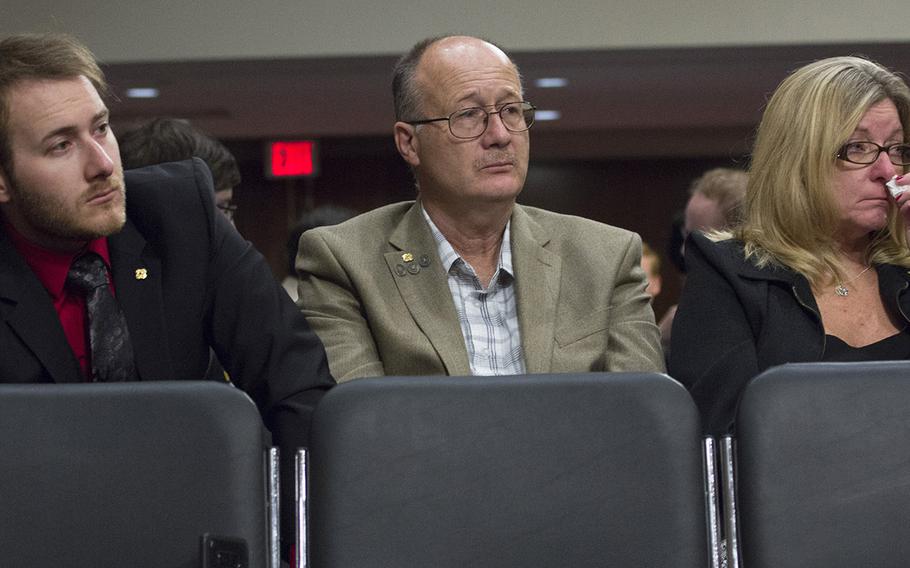 Theresa Palmer, mother of Petty Officer 3rd Class Logan Palmer, wipes away a tear during a Senate Armed Services Committee hearing on Capitol Hill, Sept. 19, 2017. At left are Austin and Sid Palmer, the brother and father of the sailor who died in a collision between the USS John McCain and a tanker near Singapore on August 21. () 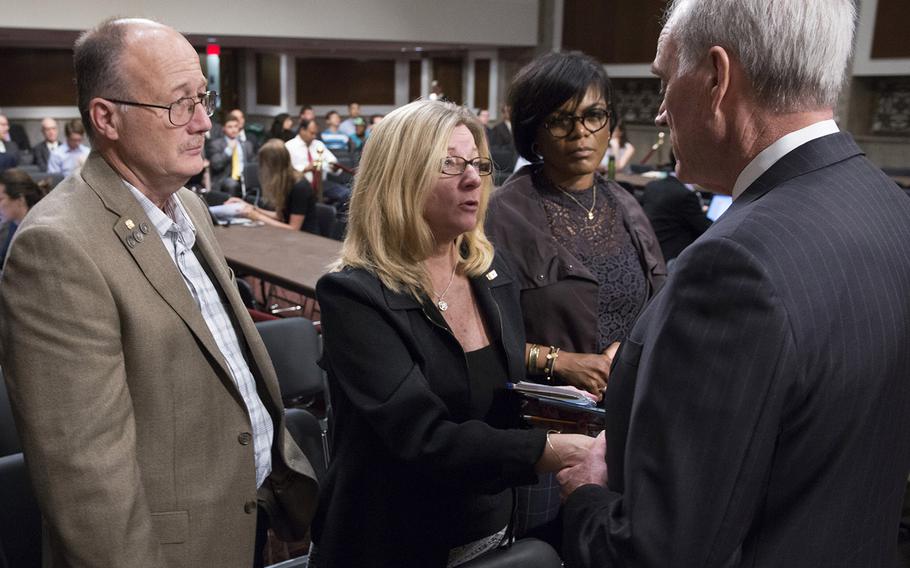 Secretary of the Navy Richard V. Spencer, right, talks with Theresa Palmer, mother of Petty Officer 3rd Class Logan Palmer, before a Senate Armed Services Committee hearing on Capitol Hill, Sept. 19, 2017. At left is Sid Palmer, the father of the sailor who died in a collision between the USS John McCain and a tanker near Singapore on August 21. In the background is Rachel Eckels, whose son, Petty Officer 2nd Class Timothy Thomas Eckels Jr., also died on the McCain. (Joe Gromelski/Stars and Stripes)

WASHINGTON — A row of grieving families looked on Tuesday morning as top Navy officials told a chorus of frustrated senators that years of high operational demands combined with budget constraints could have contributed to two deadly ship crashes.

“We have a problem in the Navy,” Navy Secretary Richard V. Spencer acknowledged during his first testimony on Capitol Hill addressing the crashes. “We are going to fix it.”

But Adm. John Richardson, the chief of naval operations, said he is still unable to confirm whether funding cuts and overworked crews contributed directly with the ship collisions in the summer that resulted in the deaths of 17 sailors.

In more than two hours of testimony, Navy officials assured the Senate Armed Services Committee that they are making immediate procedural adjustments as well as conducting several ongoing investigations. Aside from an operational pause in August following the USS John S. McCain crash, Spencer and Richardson said they have boosted readiness ship inspections in the 7th Fleet, taken new measures to ensure that sailors are getting sufficient sleep as part of their work routines and prioritized repairs of ship control problems.

Spencer and Richardson were there Tuesday to account for the Navy’s troubled year at sea. The service has seen four significant mishaps this year, including two separate ship collisions of the McCain and the USS Fitzgerald in June.

“How can this possibly happen?” Sen. Angus King, I-Maine, asked of the deadly collisions.

Spencer and Richardson told senators the Navy’s ongoing probes into the crashes will be completed this fall. The first of several Navy probes is slated to be completed by mid- to late October.

“We will get to the sequence of events,” Richardson said.

It was the second public meeting between top Navy officials and congressional members on Capitol Hill this month.

Among the attendees at both hearings was Rachel Eckels, the mother of Petty Officer 2nd Class Timothy Thomas Eckels Jr. Her son was one of 10 sailors killed in the McCain crash on Aug. 21.

“We just want answers,” Eckels said ahead of Tuesday’s hearing.

Adm. William Moran promised House members at a subcommittee hearing Sept. 7 that the service would get to the bottom of the mishaps and “leave no stone unturned.”

In a report presented during the House hearing, the Government Accountability Office, a federal watchdog agency, said the Navy has been woefully behind on addressing a long list of outstanding and urgent readiness issues.

On Tuesday, Sen. John McCain, R-Ariz., chairman of the Armed Services Committee, acknowledged there are likely a series of contributing factors to the crashes, including defense funding cutbacks forcing servicemembers to do more with less.

“This is troubling,” McCain said in his opening remarks. “This is unacceptable.”

Among GAO concerns cited in its report, the agency highlighted an increase in the number of ships based overseas without current certifications, crew-size reductions that have contributed to overworked sailors and a possible increase in safety risks as well as an inability to complete maintenance on time.

For example, the agency reported more than one-third of needed warfare certifications for Japan-based cruiser and destroyer crews had expired. The agency had reported on the expired certifications in a May 2015 report and revisited the issue in time for the House hearing.

“As of June 2017, 37 percent of the warfare certifications for cruiser and destroyer crews homeported in Japan had expired, and over two-thirds of the expired certifications… had been expired for 5 months or more,” the report stated. “This represents more than a five-fold increase” since the May 2015 report.

During Tuesday’s hearing, Richardson confirmed at least one of the report’s findings that sailors are working more than 100 hours a week and officials are studying the issue.

“It doesn’t take a study… when you are making people work 100 hours a week, OK? I think I know what 100 hours a week does to people over time,” a frustrated McCain said during one of the more tense moments of the hearing. “Why not declare a stop, a halt right now, right now? They should not be working 100 hours a week. So I appreciate all our plans, …but there are some of them that are just common sense. I think the men and women of the Navy would like to see some immediate action.”

Following the hearing, Spencer stopped short of saying the 100-hour work weeks are no longer a factor for sailors.

“I have not gotten that granular as far as the 100-hour work weeks,” he said. “I don’t know exactly where the 100 number came from -- the GAO report, what they did for the analysis. But obviously, it’s something we are going to look at.”

Days after the McCain crash, Vice Adm. Joseph Aucoin, who led the Navy’s 7th Fleet, was relieved of his command. In addition, Navy officials ordered a pause of fleets worldwide and directed a review of surface fleet operations.

But the Navy still faces an uphill climb in addressing the concerns laid out in the GAO report, said John H. Pendleton, GAO director of Defense Capabilities and Management, who also testified Tuesday at the Senate hearing. Among them, Navy shipyard deficiencies, the subject of another recent GAO report, will need to be addressed, he said.

“It’s going to be hard to get out of this vicious cycle,” Pendleton said.

McCain has long argued a larger defense budget is needed to address a readiness crisis in the armed forces.

On Monday night, McCain helped shepherd through passage of a $700 billion Senate defense bill, which is now headed to conference committee for reconciliation with a House version. The plan also faces a budgetary battle later this year, since the bill will require special congressional action to exceed a defense spending cap of $549 billion.

“There’s plenty of blame to go around,” McCain said Tuesday. But “we cannot ignore Congress’ responsibility.”

Previous GAO findings have highlighted the Navy’s longer deployments for sailors, curtailed training and reduced or delayed maintenance to meet high operational demands. The agency had previously laid out nearly a dozen recommendations to address such concerns, but the Navy had only addressed one by this month.

The agency also found the Navy has doubled the number of ships based overseas, which has resulted in reduced training periods. Also, it found during a recent 5-year period, maintenance overruns on more than 60 percent of surface ships has resulted in more than 6,000 lost operational days.

“The Navy …continues to face challenges with manning, training and maintaining its existing fleet. These readiness problems need to be addressed,” the report stated. “In addition, continued congressional oversight will be needed to ensure that the Navy demonstrates progress in addressing its maintenance, training and other challenges.”