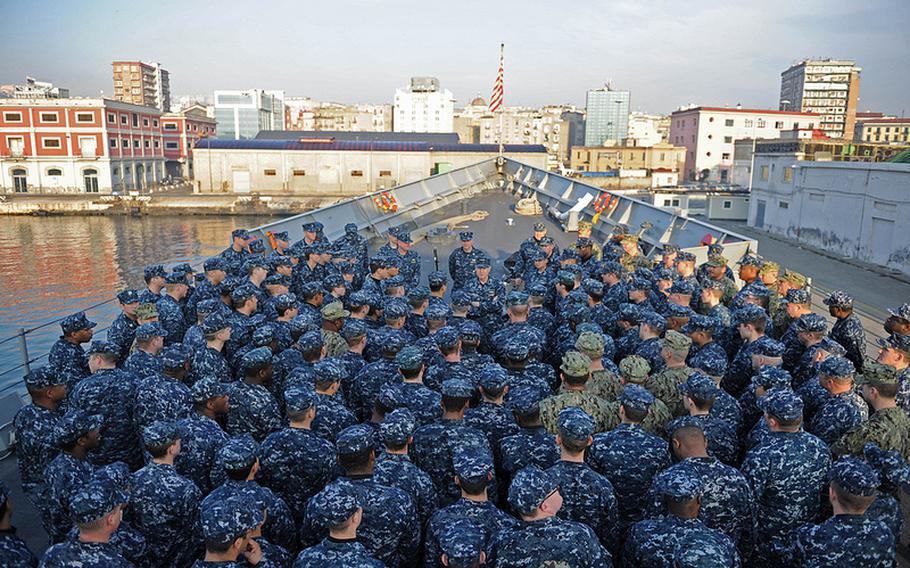 NAPLES, Italy — A new Navy-wide alcohol testing program is being greeted with a big shrug from sailors who say they already know better than to show up to work drunk.

The policy requiring random blood alcohol concentration tests aims to reduce alcohol abuse and identify impaired servicemembers before “an incident occurs due to the irresponsible use of alcohol,” Adm. Mark Ferguson, vice chief of naval operations, wrote in a message released Wednesday. Starting immediately, sailors on bases and on ships in ports across the globe could be expected to take the test before finishing their work day.

“The abuse of alcohol degrades mission readiness by leading to destructive behaviors, including motor vehicle and safety mishaps, sexual assaults, self harm and poor fitness,” Ferguson wrote. “These behaviors have far-reaching effects on individuals, commands and our families.”

The testing will focus on sailors on bases or on ships in port. Alcohol use among sailors at sea is already closely monitored. Servicemembers on authorized leave or liberty status are not subject to testing.

“It’s a good idea to keep people in line,” said Petty Officer 2nd Class James Cox, who recalled once having to work late while deployed on a submarine because a younger co-worker returned from a port visit under the influence of alcohol. “I don’t think it’s a problem at all.”

The test results cannot be used as evidence for disciplinary actions, but could trigger a referral for a medical exam. Those results do reach the military justice threshold for punishment.

Servicemembers with high levels of alcohol in their system may be referred for counseling or other non-punitive actions. Refusing to take the test is grounds for disciplinary action.

In all 50 states and the District of Columbia, the legal limit for drunken driving is a blood alcohol level of .08, according to the Centers for Disease Control and Prevention.

Intelligence Specialist Brianne Folden said Thursday that she had never observed a co-worker demonstrating questionable behavior or appearing impaired while on duty. She is concerned the new policy will create some bottlenecking if personnel are lined up for testing as they start the work day.

“It could be kind of a pain in the butt if everyone is coming to work at the same time,” she said.

Petty Officer 1st Class Josh Haymes said he backs any program that improves readiness, but hopes the Navy is certain the test results are accurate.

“I don’t know how reliable the machines are, so that concerns me,” he said.

Navy Secretary Ray Mabus authorized the testing policy under his 21st Century Sailor and Marine Initiative, which aims to promote readiness and well-being. A pilot testing program was conducted in 2012.

Some commands have already received the hand-held alcohol detection devices, which will be fully distributed to all commands by late May of this year.

“Deterring irresponsible use of alcohol is essential to the readiness of our fleet and ensuring the health and safety of our servicemembers and units,” Adm. Bill Gortney, commander of U.S. Fleet Forces, said in a statement.