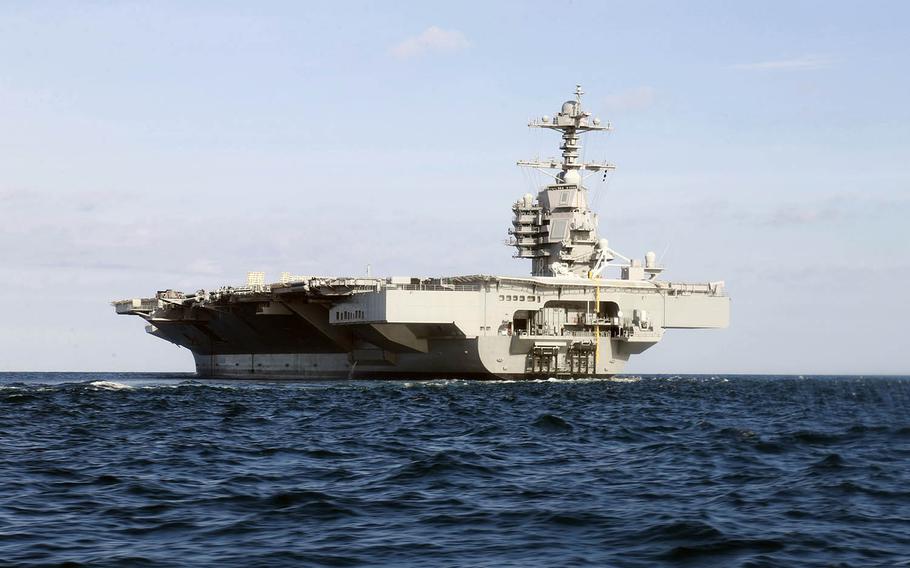 A “small number” of sailors aboard the aircraft carrier USS Gerald R. Ford were recently removed and placed in isolation at their residences after testing positive for the coronavirus, the Navy said.

“The Department of Defense (DOD) does not release the number of infected individuals at the unit, facility, or geographic area level due to operational security,” Cragg said in a statement emailed Thursday to Stars and Stripes.

Cragg said that thorough contact tracing had been conducted, “and impacted Sailors were placed in a mandatory restriction of movement for continuous evaluation.”

“USS Gerald R. Ford continues to follow all [Defense Department] and [Centers for Disease Control and Prevention] mitigation guidance,” Cragg said. “The ship takes the crew’s safety very seriously and are taking every precaution and following all established protocols to safeguard all crewmembers.”

Among the precautions being taken for the roughly 2,700 crew members now aboard the carrier are physical distancing, limited group gatherings, personal protective equipment and intensive cleaning, she said.

The carrier is homeported in Norfolk, Va. During the past week, the crews of the Ford and the carrier John C. Stennis conducted two in-port damage control training events, according to a Navy news release.

The Navy experienced a severe outbreak of COVID-19, the respiratory disease caused by the virus, among the crew of the carrier USS Theodore Roosevelt this spring. More than 1,200 crew members were infected, with one death, and the ship was sidelined for weeks at port in Guam.

In a message to the fleet in September, Chief of Naval Operations Adm. Mike Gilday said that more than 190 ships in the fleet had suffered some level of coronavirus infection this year.

As of Wednesday, 12,074 sailors have tested positive for the virus, according to the Navy’s tally.