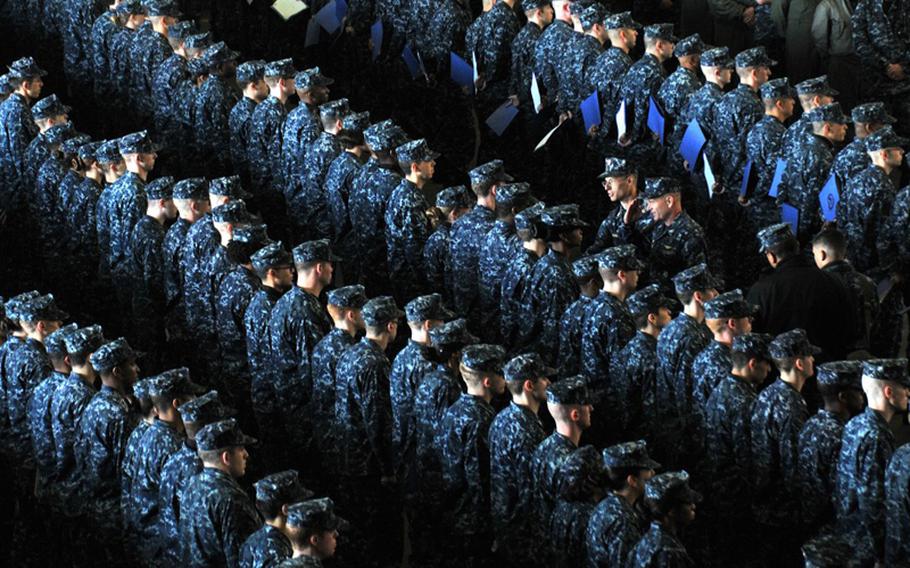 Newly promoted petty officers stand in formation in thier NYCO uniforms aboard the USS George Washington during a frocking ceremony Dec. 7, 2012. The nylon-and-cotton uniforms worn by sailors on ships and at bases “will burn robustly,” and turn into a “sticky molten material,” according to a test conducted by the Navy Clothing and Textile Research Facility. (Ramon G. Go/Courtesy of the U.S. Navy)

SASEBO NAVAL BASE, Japan — The Navy has launched a website to field complaints and suggestions on how to reduce administrative distractions, Navy officials said this week.

The website — open to every sailor, reservist and civilian employee — was launched Monday by the Navy’s Reduce Administrative Distractions Team, an officer-dominated working group created last month by Chief of Naval Operations Adm. Jonathan Greenert in response to sailors’ complaints. The aim is to improve mission readiness by streamlining administrative and training processes: anything from cutting paperwork to ending duplicate training.

The site has been set up like a social media interface so users can leave comments as well as respond to and vote on other posts, according to a Navy statement. Users can alter their profile settings to post anonymously. The site will remain open for comment until July 31.

“The interactive RAD website provides all ranks, active, Reserve and Navy civilians with a platform to voice their concerns about administrative tasks, procedures, instructions and training, and propose solutions to fix these issues,” the statement said. “The collected data can be analyzed by many different variables, from what is bothering commanding officers to what junior sailors are concerned with.”

Navy officials have said the initiative will be undertaken in several phases. Following data collection, which also includes command surveys, the team will analyze the data and make proposals by Aug. 30, the statement said. The final step is the action phase, which will be completed by Sept. 30.

The Navy will then study the results and plan for the next cycle.

The website is not accessible to the public. Navy officials said it already has received responses on a wide variety of topics, including anti-terrorism force protection, quality assurance and Navy Knowledge Online.