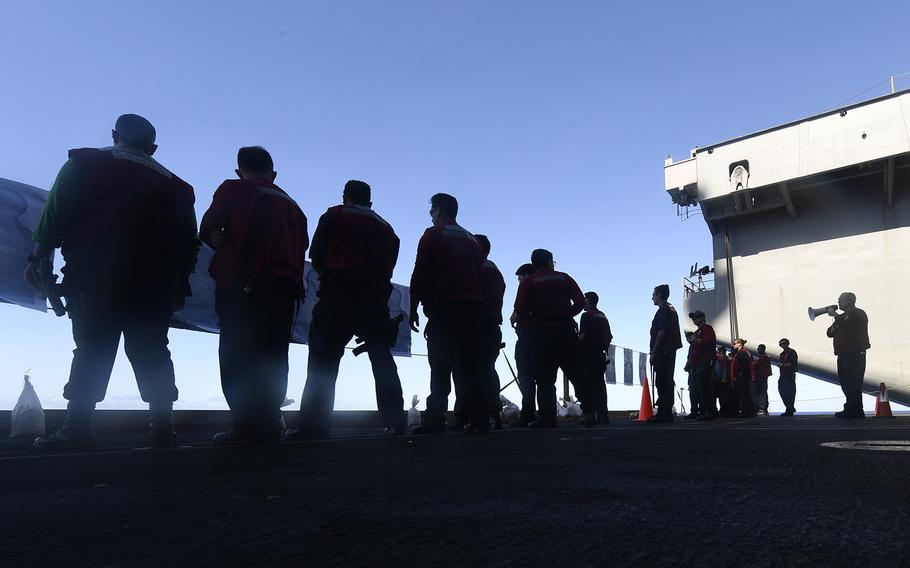 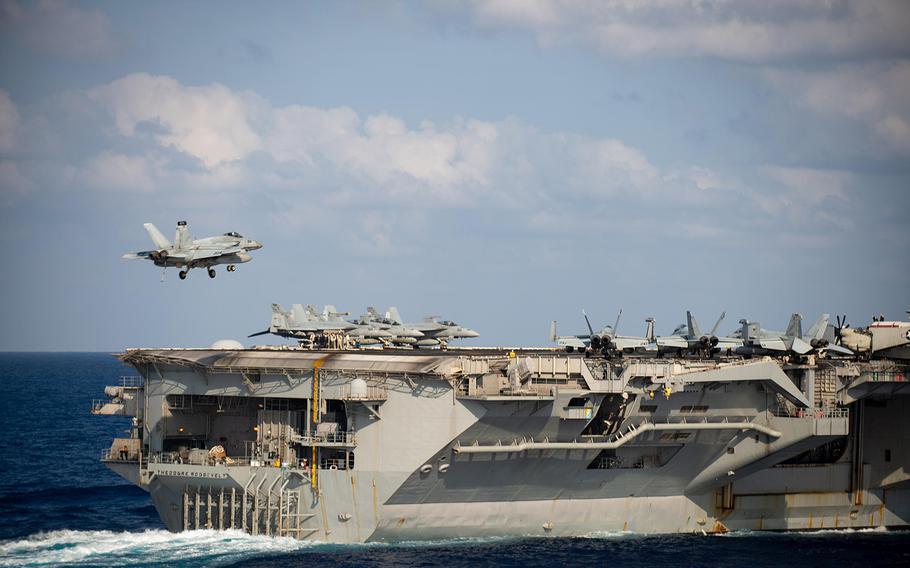 An F/A 18F Super Hornet lands on the flight deck of the USS Theodore Roosevelt (CVN 71) March 18, 2020, while the aircraft carrier was transiting the Philippine Sea. (Nicholas V. Huynh/U.S. Navy) 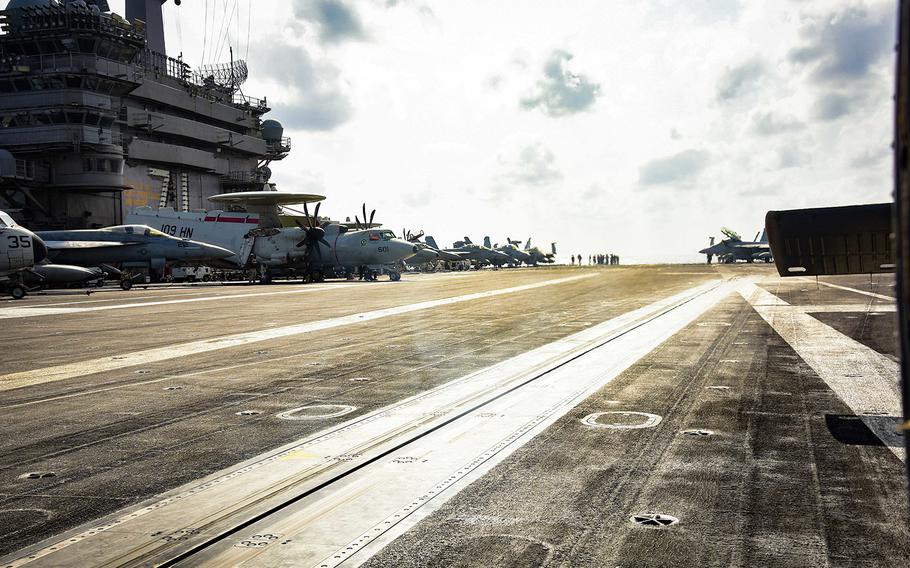 Sailors work on the flight deck of the USS Theodore Roosevelt (CVN 71) March 18, 2020, while transiting the Philippine Sea. On Wednesday, April 1, the Navy said it is working to move most of the crew off the aircraft carrier because of a coronavirus outbreak on the ship. (Brandon Richardson/U.S. Navy )

WASHINGTON — The Navy is working to remove some 2,700 sailors from the USS Theodore Roosevelt by Friday in an attempt to slow a spreading coronavirus outbreak on the aircraft carrier now docked off the coast of Guam, senior service officials said Wednesday.

The Navy has already moved about 1,000 sailors off the ship, of which 93 sailors had tested positive for the fast-spreading virus as of Wednesday, acting Navy Secretary Thomas Modly said. The scramble to quickly test and remove troops from the ship comes one day after a letter to top Navy officials penned by the Roosevelt’s top officer surfaced in the media.

In the letter, Capt. Brett Crozier warned the outbreak could kill some sailors, and that “if we do not act now, we are failing to properly take care of our most trusted asset — our sailors.”

Modly and Adm. Michael Gilday, the chief of naval operations, told reporters Wednesday that they agreed with Crozier’s assessment of the situation and his decision to send the letter up the Navy’s chain of command. They blamed any slowed response to the crisis on miscommunication and indicated the captain would not face punishment unless it was determined that he had leaked the letter to the media.

The contents of Crozier’s letter were first published Tuesday by the San Francisco Chronicle, which reported 150 to 200 Roosevelt sailors had been sickened by the virus, citing an unnamed senior officer aboard the ship.

“We need a lot of transparency in this process and we want information to flow up through the chain of command, and that’s what [Crozier] did,” Modly said in a news briefing from the Pentagon. “He submitted this letter to his chain of command. How it got out to the media, I don’t know. I don’t think anyone will ever know. We’d certainly prefer that it didn’t.”

The Navy is working with Guam’s governor to find additional space to place Roosevelt sailors in isolation, including hotel rooms left empty amid the pandemic. But the ship cannot be fully evacuated, Modly said, estimating about 1,000 sailors would have to remain aboard at all times. He said the service had yet to establish a timeline for removing as many as 4,000 sailors from ship.

“Our plan has always been to remove as much of the crew as we can while maintaining the ship’s safety,” he said. “Just because it is big and it floats and it has a lot of people on it — the comparison of the T.R. to a cruise ship pretty much ends there.”

Sailors must remain aboard the aircraft carrier to secure major weapons systems and ammunition and run its nuclear power plant, Modly said. Some sailors will also stay aboard to thoroughly clean the more than 1,000-foot-long ship that hosts a crew of nearly 5,000.

Officials hope to rotate personnel back aboard the ship after they have spent two weeks in isolation on Guam and test negative for the virus.

The plan is to “take the appropriate number of people off and test, quarantine, isolate while some number is running the ship,” Adm. John Aquilino, the commander of U.S. Pacific Fleet, told reporters Tuesday during a phone conference. “Once those sailors are quarantined, isolated, and retested, when they are full-up [coronavirus] free, the plan will be to rotate them back onto the ship and finish the remainder of the ship.”

Modly stressed Wednesday that none of the sailors aboard the Roosevelt had been hospitalized with coronavirus complications. Of the 93 cases, he said 86 had experienced some form of mild symptoms.

It remains unclear where or when the breakout started. Three sailors were flown off the Roosevelt on March 24 after testing positive for the virus. Those cases came about two weeks after the ship left a port visit in central Vietnam’s Danang.

But the Navy is not convinced Vietnam was the outbreak’s genesis. At the time of the visit, less than 20 positive cases of coronavirus had been reported in all of Vietnam — all far north of Danang in the country’s capital Hanoi — and sailors were screened for symptoms or potential exposures before returning to the ship, Gilday said. Meanwhile, aircraft brought personnel on board from other locations.

“Understanding exactly who patient zero is, is probably going to be an impossible task,” the admiral said.

What is clear, Modly added, is the conditions aboard a Navy ship allow viruses to thrive as sailors live and work in very close quarters, making impractical the implementation of the social distancing recommendations championed by health officials across the globe.

“Once the virus gets on a ship like that it’s going to spread,” he said.

None of the Navy’s other 94 deployed ships have reported positive cases of the coronavirus. Modly said several sailors assigned to ships at their homeports have tested positive, but no ships reported large numbers of infections.

“Right now the Teddy Roosevelt is the front line theater of this battle,” with the coronavirus, Modly said. “We have to respond with skill and agility and with direct communication to the American people. I’m confident that the Navy … will save lives and protect this nation as it always has and always will.”