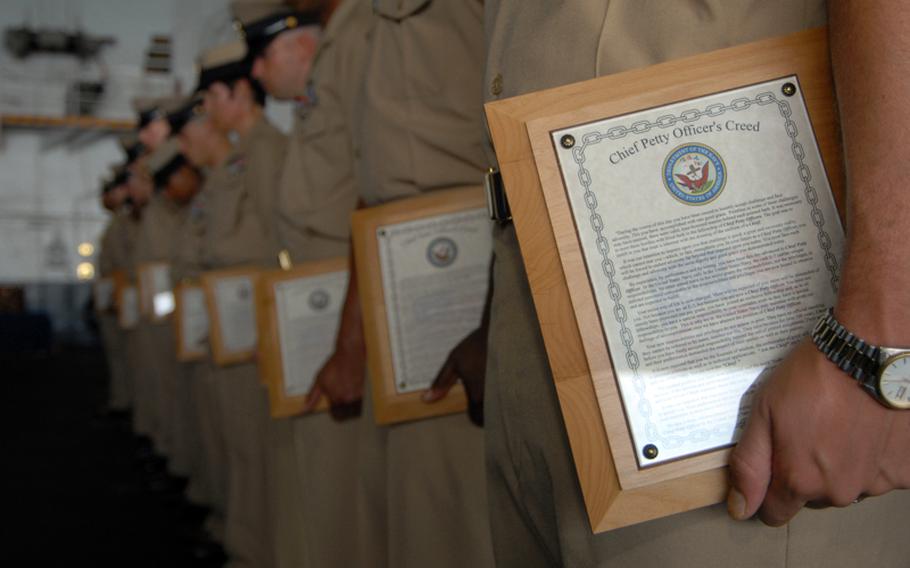 In this file photo from 2007, chief petty officers hold on to a plaque scribed with the Chief Petty Officer's Creed during their pinning ceremony aboard Nimitz-class aircraft carrier USS Dwight D. Einsenhower. (Jon Dasbach/Courtesy U.S. Navy )

In this file photo from 2007, chief petty officers hold on to a plaque scribed with the Chief Petty Officer's Creed during their pinning ceremony aboard Nimitz-class aircraft carrier USS Dwight D. Einsenhower. (Jon Dasbach/Courtesy U.S. Navy ) 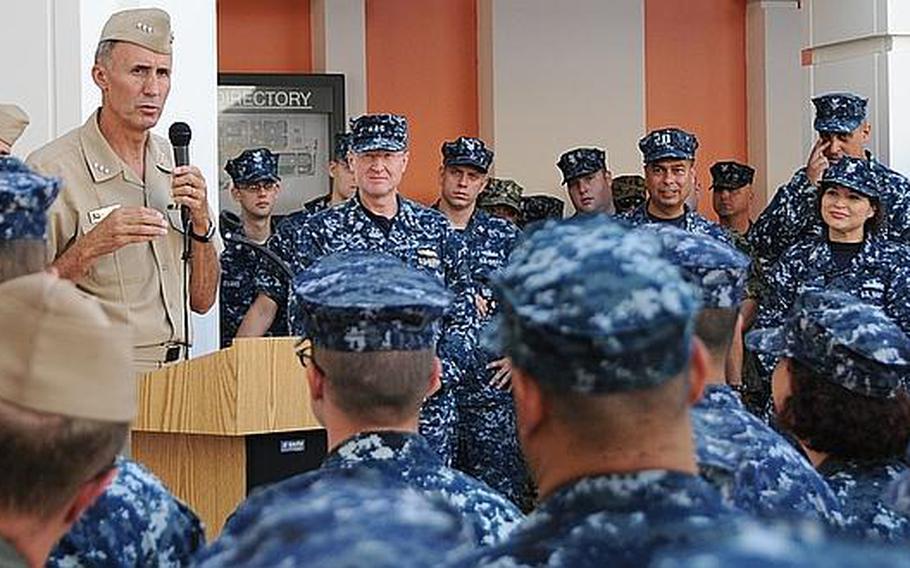 SASEBO NAVAL BASE, Japan &mdash; The Navy will ship hundreds of sailors to sea before their projected rotation date to fill undermanned billets, the Navy has announced.

Over the past six months, the service has instituted measures to address gaps in critical positions, offering cash and other perks to compel sailors to head back out to sea. While those measures are still taking hold, Navy officials said last week that more must be done to address the at-sea manning issue &mdash; including involuntary measures &mdash; as nearly one-third of its total enlisted ratings are currently unfilled.

As a result, existing programs are being expanded and new measures implemented to ensure these billets are staffed properly, according to a Navy news release.

&ldquo;As our Navy is in ever-increasing demand around the world, filling these gap billets at sea has become more critical,&rdquo; Chief of Naval Personnel Vice Adm. Scott Van Buskirk said in the release. &ldquo;These actions should reduce the short-notice actions to man high-priority billets, such as cross-decking and diverts.&rdquo;

The Navy is separating nearly 3,000 mid-career sailors this year in 31 other fields that are overmanned.

The new initiatives include targeting between 200 and 400 sailors with critical skills over the next few months under Limited Directed Detailing and sending them back to sea before their projected rotation date, the release said. This initiative will target sailors who have completed a minimum of 24 months on shore duty.

Also, the Chief Petty Officer Early Return to Sea program is being updated and will now curtail shore duty for enlisted sailors between E-7 to E-9 and send them back to sea to fill billets that aren&rsquo;t being filled by rotating sailors.

There will also be changes to Career Management System Interactive Detailing beginning in the August 2012 cycle, the news release said. A single set of the highest priority sea and shore billets will be identified, advertised and filled with priority by detailers each cycle.

In addition, the Voluntary Sea Duty Program is being extended for an additional year and expanded to include high-tenure waivers so sailors are not compelled to retire if they choose the sea, according to officials from Personnel Support Activity Detachment Sasebo and the news release.