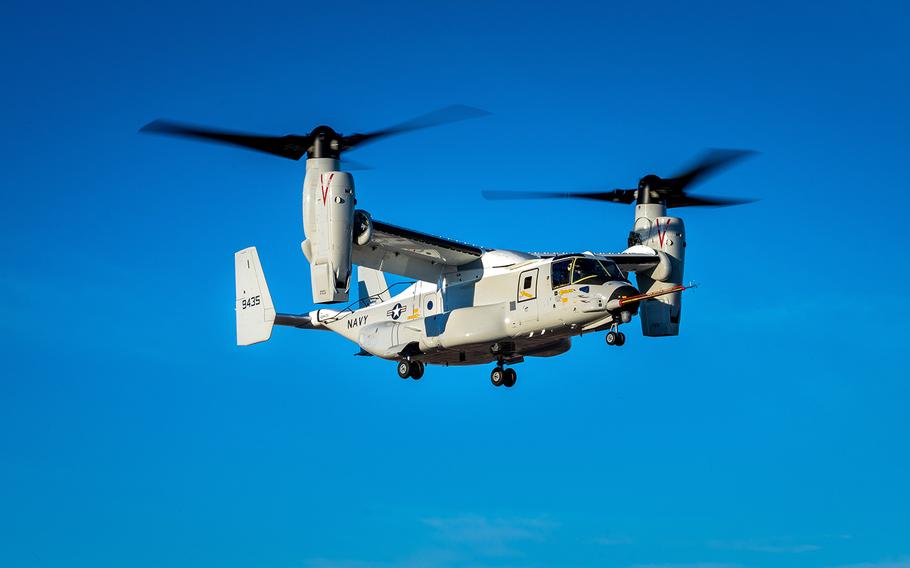 The CMV-22B Osprey is the Navy's version of the tiltrotor aircraft used by the Marine Corps and Air Force. The variant was designed with increased fuel capacity for long-range flights. (Bell-Boeing)

The Navy’s new Osprey, designed to replace the aging fleet of aircraft that ferry personnel and supplies between the shore and carriers at sea, has taken flight for the first time, Boeing Co. and Bell Textron Inc. announced this week.

The CMV-22B Osprey is the Navy’s version of the tiltrotor aircraft used by the Marine Corps and Air Force. The variant was designed with increased fuel capacity for long-range flights.

The CMV-22B’s first flight took place Tuesday at Bell’s Amarillo Assembly Center in Texas, according to the announcement. The company will deliver the first CMV-22B to Air Test and Evaluation Squadron 21 at Naval Air Station Patuxent River in Maryland for a developmental test early this year.

The service in October established the first Fleet Logistics Multi-Mission Wing, which will be charged with integrating the CMV-22B into fleet operations.

As a carrier onboard delivery aircraft, the Navy’s Osprey will move personnel, supplies, mail and other cargo to and from an aircraft carrier. It can carry up to 6,000 pounds.

Specific data on passenger capacity were unavailable Thursday, but similar V-22s support up to 24 troops with crews of three or four.

The Navy in July 2018 awarded Bell Boeing about $2.85 billion to develop and deliver 39 of the aircraft, according to the Defense Department. The service plans to deploy its first CMV-22B squadron aboard the USS Carl Vinson next year.

The contract was part of a $4.2 billion deal that also included 14 MV-22B aircraft for the Marine Corps, one CV-22B for the Air Force and four MV-22B Osprey for Japan, according to the Defense Department. The aircraft are expected to be delivered by 2024.

The Osprey’s ability to take off and land as a helicopter but fly as a turboprop aircraft should provide “significant increases in capability and operational flexibility over the C-2A,” according to a Naval Air Systems Command factsheet.

“CMV-22B operations can be either shore-based, expeditionary or sea-based,” the factsheet said. “The Osprey is a critical warfighting enabler, providing the time sensitive combat logistics needed to support combat operations.”

Compared to the MV-22B Osprey, the Navy’s version also has a “beyond line-of-sight high-frequency radio, improved fuel dump capability, a public address system for passengers and an improved lighting system for cargo loading,” according to the factsheet.

The MV-22B Osprey was first deployed in 2007, and the Air Force’s CV-22B Osprey followed two years later, according to a Navy factsheet.