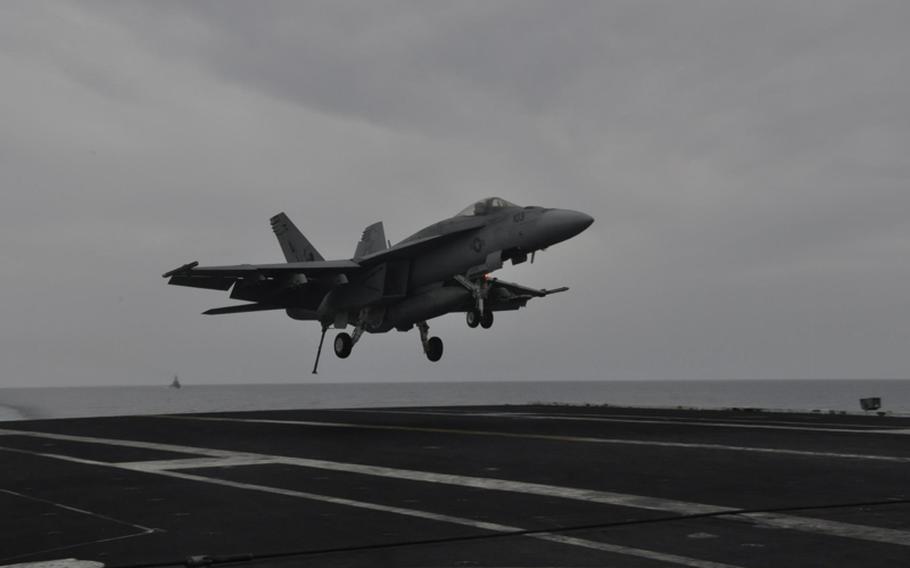 A Navy jet comes in for a landing on the aircraft carrier USS George H.W. Bush on Friday as the ship travels in the Mediterranean Sea. (Geoff Ziezulewicz/Stars and Stripes)

A Navy jet comes in for a landing on the aircraft carrier USS George H.W. Bush on Friday as the ship travels in the Mediterranean Sea. (Geoff Ziezulewicz/Stars and Stripes) 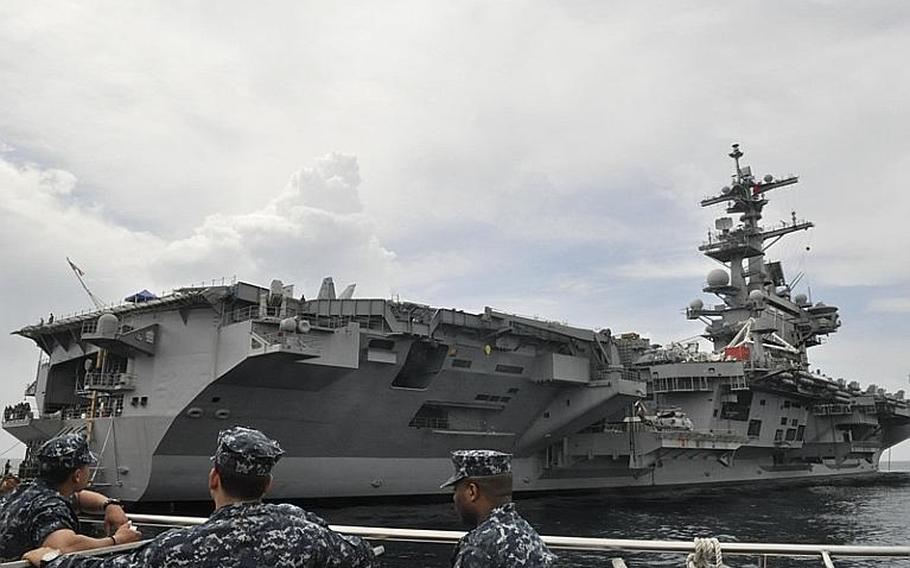 Sailors aboard a transport ferry Saturday were among the first from the aircraft carrier USS George H.W. Bush to hit dry land. The Bush pulled into the port of Naples, Italy, for a visit on its maiden deployment. (Geoff Ziezulewicz/Stars and Stripes) 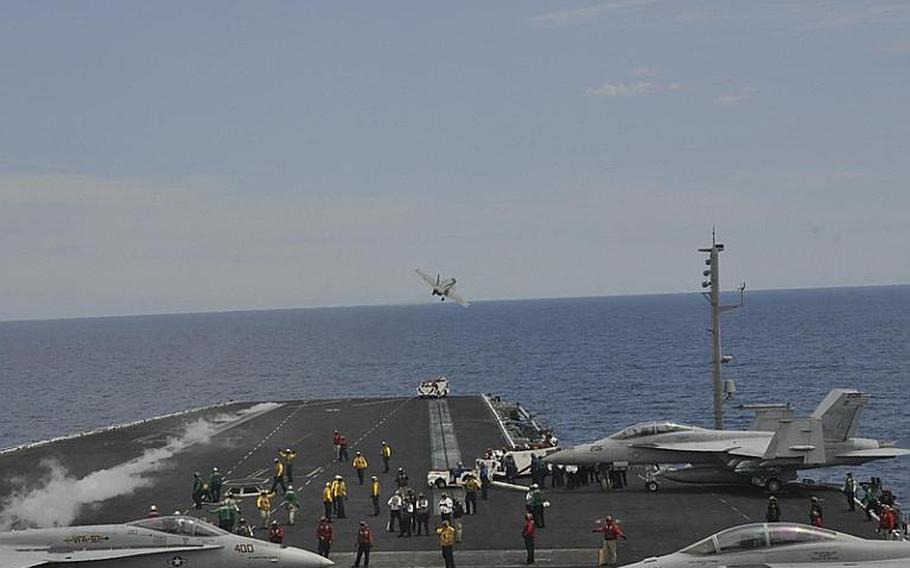 A jet catapults off the runway of the aircraft carrier USS George H.W. Bush on Friday in the Mediterranean Sea. The Bush is on its maiden deployment as the flagship of a carrier strike group. (Geoff Ziezulewicz/Stars and Stripes) 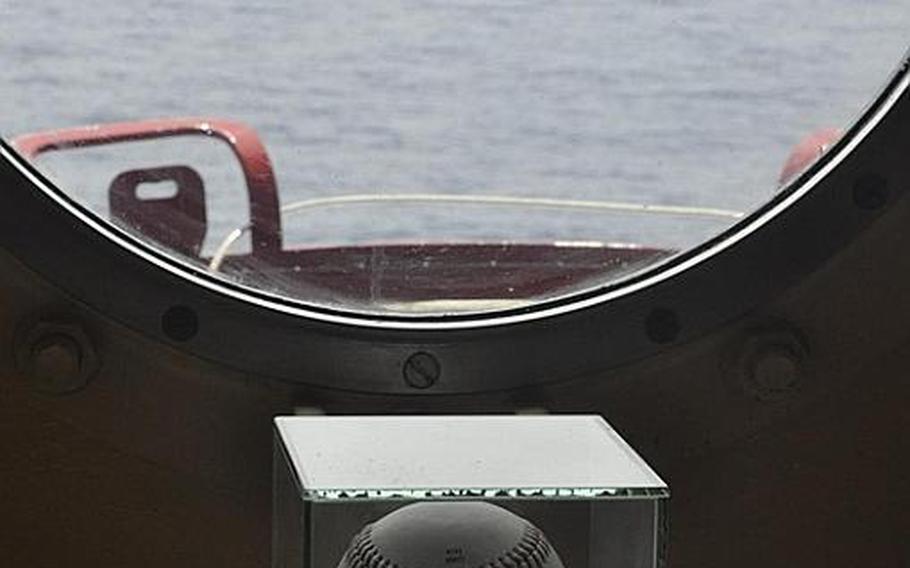 A baseball signed by America's 41st president, George H.W. Bush, sits in a visiting room aboard the aircraft carrier that bears his name. This room is modeled after furniture in the Bush family home. (Geoff Ziezulewicz/Stars and Stripes)

ABOARD THE USS GEORGE H.W. BUSH &mdash; The Navy&rsquo;s newest aircraft carrier arrived in Naples, Italy, Saturday morning for a visit, one month into its maiden deployment.

It is one of many firsts for the USS George H.W. Bush and its carrier strike group during a seven-month deployment that will see it traveling the Mediterranean waters of the 6th Fleet en route to the Middle East and the 5th Fleet&rsquo;s territory.

The 1,000-foot, 97,000-ton carrier is the newest and the last of the Nimitz class to be built. The strike group is led by Rear Adm. Nora Tyson, the first female to command a strike group.

It&rsquo;s also the first voyage for the guided-missile destroyer USS Truxtun, and the group features the debut of the EA-18G &ldquo;Growler&rdquo; surveillance aircraft among the more than 70 aircraft that comprise the carrier&rsquo;s air wing.

There are about 9,000 sailors deployed with the carrier strike group.

&ldquo;It&rsquo;s really a phenomenal experience for all of us,&rdquo; Tyson said Friday aboard her flagship carrier.

The fleet steamed out of Norfolk, Va., about a month ago and so far has stopped in England and Spain.

It&rsquo;s truly a deployed life for the men and women aboard the Bush. They work 12 hours on and 12 hours off, keeping the carrier, which is powered by two nuclear reactors, operating. Despite technological improvements over the years, there is still lots to do aboard ship. &ldquo;Work expands to fill time,&rdquo; Bush commander Capt. Brian &ldquo;Lex&rdquo; Luther said.

For the junior enlisted sailors, life is particularly tight in the living quarters. Luther said Thursday that a federal prisoner is actually allowed more living space than some of his low-ranking sailors.

Space is also at a premium on deck, where aircraft are painstakingly positioned for take-off, maintenance or fueling.

Sailors working on deck wear colored shirts that correspond to their task in catapulting a jet off the deck or catching one when it comes in for landing. Jets coming into land accelerate as they near the deck, and stopping them involves a hook on the jet&rsquo;s rear catching a cable on the deck. If that hook doesn&rsquo;t snag the cable, pilots need to be ready to take back off, circle around and try again.

One tiny piece of metal on the ground could turn into a fatal projectile in this high-speed atmosphere, so crews periodically walked the entire deck Friday, searching for any debris that could turn dangerous when jets are coming or going.

While the Bush is the newest and last of the Nimitz-class carriers, the differences between this behemoth and the original USS Nimitz are not always apparent to the naked eye, Luther said.

The Bush&rsquo;s layout is generally the same as the Nimitz's, but includes advances in electronics and other technologies, he said Thursday in a room fashioned after a living room found in the 41st president&rsquo;s home. Technological advances in catching and catapulting jets from the flight deck are prime features of this latest carrier.

Luther was the executive officer on the Nimitz at one point. With this latest stint at the helm of the Bush, Luther joked that he is an &ldquo;alpha and omega captain.&rdquo;

&ldquo;I was on the first one,&rdquo; he said. &ldquo;Now I&rsquo;m here on the last one.&rdquo;