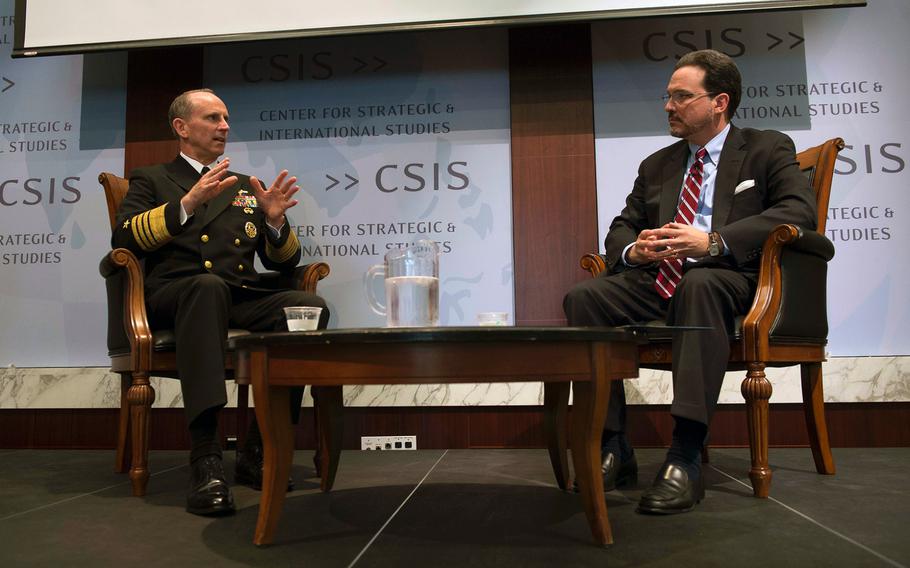 In this file photo from May 19, 2014, Chief of Naval Operations Adm. Jonathan Greenert speaks with Mike Green, vice president of Asia and Japan studies at the Center for Strategic and International Studies, about the Navy's rebalance to the Asia-Pacific region during a conference in Washington, D.C. (Peter D. Lawlor/U.S. Navy)

WASHINGTON — For the first time in seven years, the Navy and its sister services soon will release an updated version of their global maritime strategy, the service’s top officer said Tuesday.

“We’re getting pretty close to that,” Chief of Naval Operations Adm. Jonathan Greenert told audience members at the Center for Strategic and International Studies, a Washington think tank.

Greenert said an update was needed because of changes in the strategic environment as well as new policy guidance, including the 2012 national defense strategy and the 2014 quadrennial defense review.

Since the last version of "A Cooperative Strategy for 21st Century Seapower" was released in 2007, China’s naval capabilities have surged and disruptive technologies such as cyberattacks have opened up new avenues of warfare. The Navy and the rest of the U.S. military also began an effort to execute a pivot to Asia while still dealing with crises in the Middle East and Europe.

On the fiscal front, massive budget cuts are slated to hit the Pentagon in the coming years if Congress doesn’t change the current law.

“There’s a limit to how quickly we can turn and deploy our ships faster and faster,” Greenert warned. “We’re about there,” and “to do more is going to be very difficult.”

Greenert said the need to leverage a “global network” of partner navies to achieve American aims will be a prominent theme in the revised strategy.

The service chief said that on any given day, there are about 100 U.S. Navy ships deployed, whereas the rest of the world’s navies and coast guards combined have about 300 out and about.

Greenert thinks there’s a lot of potential for greater cooperation on a variety of missions, such as counterpiracy and keeping the sea lines of communications open.

“Presence is the priority,” he emphasized. “The global network I think has to be tapped into, and we’ve got to bring as many coalitions to bear as possible. It’s our future I think in all operations outside of… defense of the homeland.”

He envisions a series of informal alliances in which partner nations, working within a relatively simple command structure, can “plug and play” with whatever capabilities they are able to provide.

However, the Navy’s top officer did not go into detail about how such cooperation could be achieved, and he noted that political constraints would limit how much other nations would be willing to contribute to international efforts.