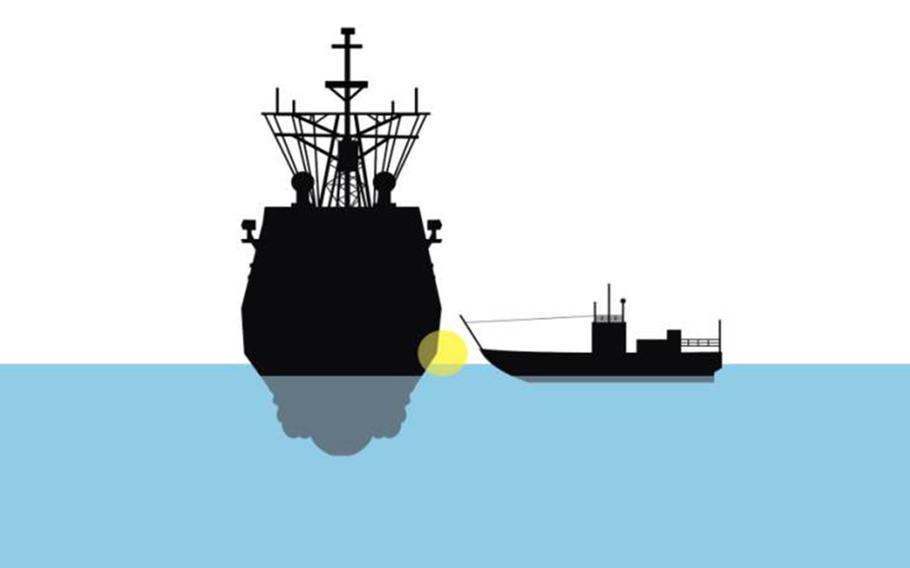 This Navy graphic details where the guided-missile cruiser USS Lake Champlain collided with a South Korean fishing on May 9, 2017. (Courtesy of the U.S. Navy) 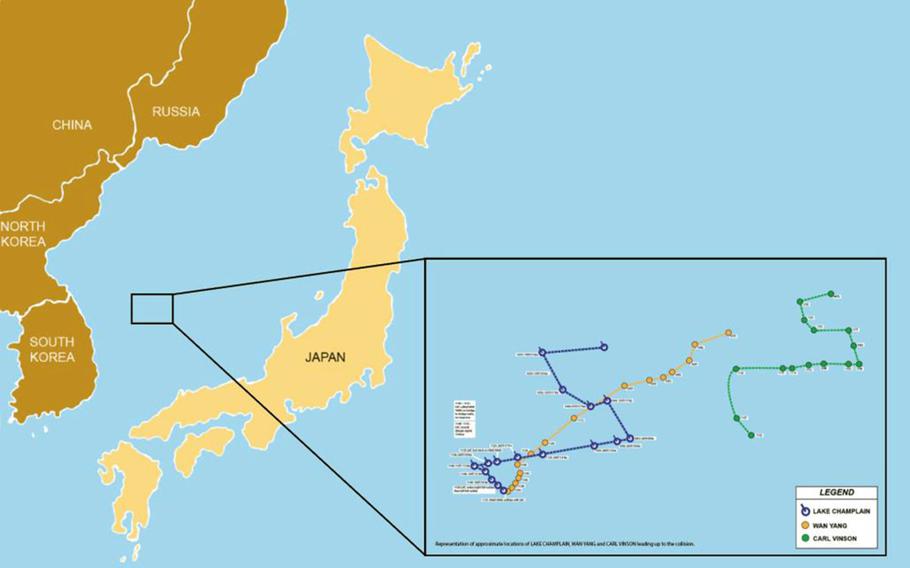 This Navy graphic tracks the location of the USS Lake Champlain before and after its collision with a South Korean fishing vessel on May 9, 2017. The aircraft carrier USS Carl Vinson was nearby at the time of the crash. (Courtesy of the U.S. Navy)

YOKOSUKA NAVAL BASE, Japan – Poor training and leadership lead to an “avoidable” collision between a U.S. warship and a South Korean fishing boat last spring, according to a Navy report on the incident.

Failures in watch standing and navigation were the main causes of the May 9 collision between the guided-missile cruiser USS Lake Champlain and the fishing vessel Nam Yang 502, the service said in the report released Thursday.

The cruiser’s bridge team and combat information center were also at fault, it said. Sailors there didn’t communicate properly or notify the ship’s executive officer of the situation.

The collision, which resulted in administrative and disciplinary actions against the Lake Champlain’s captain, executive officer and several other crew members, was one of a slew of incidents involving U.S. warships in the Pacific this year.

The Navy initially withheld details of the Lake Champlain incident, citing litigation concerns. However, Chief of Naval Operations Adm. John Richardson said in the report that it was “paramount that the Navy transparently explain the causes and lessons learned to the American people.”

He added: “I am committed to make every effort to ensure these types of incidents do not happen again.”

On the morning of the accident, the Lake Champlain was operating in the Sea of Japan alongside the aircraft carrier USS Carl Vinson and a South Korean destroyer, ROKS Yangmanchun. A radar display on the bridge was not working and the cruiser was not transmitting its position to civilian ships, the report said.

At 10.31 a.m., the Carl Vinson spotted the fishing boat on radar 11 nautical miles from the Lake Champlain and reported the information. The Lake Champlain identified the fishing vessel, which didn’t have a working global positioning system or radio, at 10:50 a.m., tracked it for 45 minutes and lost contact with it at 11.35 a.m.

The Lake Champlain’s crew tried to change position to stay on course with the Carl Vinson, not realizing that they’d turned in front of the fishing boat. The cruiser then ordered maximum speed and attempted to turn right and then left in a futile attempt to avoid a collision. The bridge watch team was “slow to react and executed improper and untimely maneuvers,” the report said.

The Lake Champlain attempted to contact the fishing boat twice by radio with no response, it said. The cruiser gave the international signal for danger at least three times.

“The Nam Yang 502 did not respond to radio attempts, use its whistle or take necessary action to avoid the collision,” the report added.

At 11.51 a.m., the fishing boat’s bow struck the cruiser on its center-left side. The impact “created a 3-foot-by-5-foot-wide dent as well as visible scrapes to the paint,” the report said. There were no significant injuries reported aboard either ship, and the Lake Champlain remained operational.

The warship’s then-commanding officer, Capt. Chris Cegielski, was attending a meeting aboard the Carl Vinson and the executive officer and navigator were not on the bridge during the collision, the report said.

The Lake Champlain’s crew “was ultimately unprepared for the situation in which they found themselves through a lack of preparation, ineffective command and control, and deficiencies in training,” the report said.

The crew were also faulted for poor radar operation and seamanship as well as improper use of lookouts, it added.