From Hope to Giffords: The Navy's long history of unconventional ship names 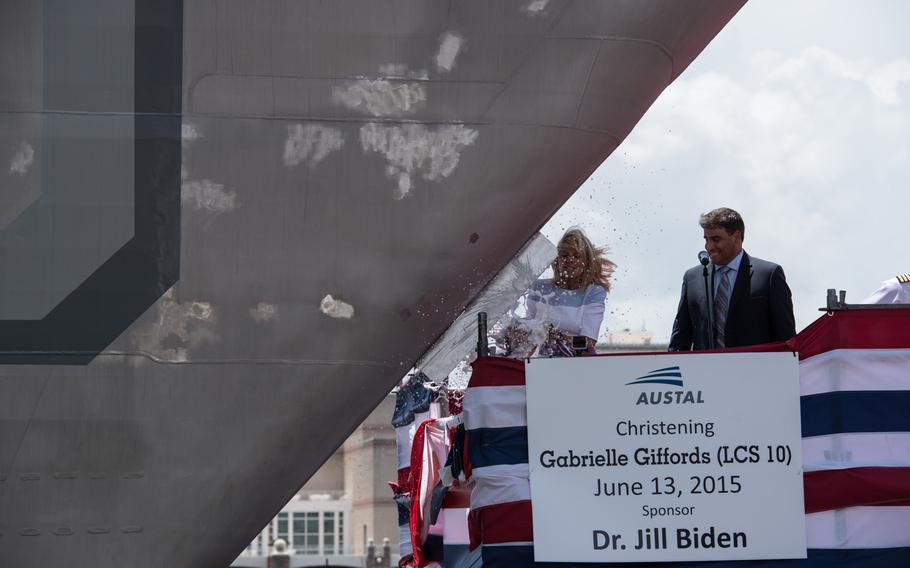 Jill Biden christens the future littoral combat ship USS Gabrielle Giffords at Austal USA in Mobile, Ala., on June 13, 2015. It is 16th U.S. naval ship to be named for a woman and only the 13th since 1850 to be named for a living person. Courtesy of U.S. Navy (U.S. Navy)

It was Navy Secretary Ray Mabus, who proposed in early 2012 that an LCS carry the Democratic congresswoman’s name, calling her “a great inspiration” who represented the Navy and Marine Corps traits of “overcoming, adapting and coming out victorious despite great challenge.”

Giffords was shot point-blank in the head by a gunman in January 2011 in Tucson, Ariz., in an attack that killed six others died. The three-term representative resigned from Congress a year later, and her well-known struggle to recover reached almost legendary status.

Still, backlash against Mabus’ decision was swift and sharp, with some critics — both inside and outside the military — arguing he had taken the solemn responsibility of naming ships way off course. They argued that many servicemembers who had died while serving their country were more deserving of the honor.

The answer: not much.

And perhaps that’s why criticism has been muted in the days since the vice president’s wife broke the bottle of champagne across the Giffords’ bow: the name choice was a departure from tradition but by no means unprecedented.

That 2012 report, researched and written by four Navy historians, concluded that of the 32 ships named by Mabus as of May 31, 2012, all but the USS Gabrielle Giffords had been “consistent with established, special and unofficial naming conventions.”

And even that one anomaly “conforms with the occasional exceptions to type naming conventions made by Secretaries of the Navy since 1798,” the historians noted.

As the report laid out in detail, there have been plenty of exceptions in ship-naming conventions throughout the years since Congress gave the secretary of the Navy that responsibility in 1819.

Navy secretaries have relied on naming conventions to guide their choices, but there has also been an enduring tension between what the report calls orthodox traditionalists and pragmatic traditionalists. The former have advocated a “coherent and integral” system of ship naming and the establishment of an approved list of names from which secretaries must choose.

But attempts to create such a rigid system have failed, primarily because most Navy secretaries have been of the pragmatic school. The pragmatists agree that Navy secretaries should follow contemporary naming conventions — whether that means presidents, Medal of Honor recipients or U.S. states/cities — to the greatest degree possible, but there’s a right to deviate when circumstances demand, the report said.

The precedent for such discretion was set even before the end of the 1700s.

The Naval Act of 1794 authorized building six frigates, and it was agreed that the names would come from “principles or symbols found in the U.S. Constitution,” such as “Constitution” and “President.”

Benjamin Stoddert, the first Navy secretary, however, chose to name the sixth ship, the USS Chesapeake.

The report said no historical record has been found to explain the deviation, “but the result was clear: the very first naming decision by the very first Secretary of the Navy resulted in a ‘corruption’ of the established naming convention.”

Naming ships after living people was commonplace in the Navy’s early decades, but during World War II the practice of naming warships only after the deceased, particularly those who died in battle, was virtually codified.

A 1969 Navy panel decreed that warships would not be named to honor living people, nor were they to be named after members of Congress. But only several years later, Navy Secretary John Chafee named four attack submarines — usually named for fish and creatures of the sea — after deceased lawmakers.

In 1974, President Richard Nixon announced that a supercarrier would be named the USS Carl Vinson, in honor of the still-living congressman known as the “Father of the Two-Ocean Navy,” breaking what had been a 160-year-old tradition.

Naming ships after a living person is still relatively uncommon — about three per decade since 1970, the report said — but presidents Jimmy Carter, Ronald Reagan and George H.W. Bush, to name a few, have been so honored. (And so was comedian/actor Bob Hope, who started entertaining troops in the field during World War II and continued to do so through Vietnam.)

Not that Navy secretaries aren’t influenced by elected officials and the public.

Nine days after Sen. Henry “Scoop” Jackson died, Reagan announced in September 1983 that ballistic missile submarine SSBN 730 would be named for him — creating a bit of a dilemma for Navy Secretary Edward Hidalgo, who’d already bestowed the name “Rhode Island” to the ship. (Reagan assuaged any hard feelings by Ocean State denizens by naming a different sub “Providence.”)

Every Navy secretary is buffeted by requests from “service members, citizens, interest groups or individual members of Congress who want to name a ship in honor of a particular hometown, or state or place or hero or famous ship,” the historians said.

The report quotes the editor of “Combat Fleets of the World,” who noted that ship-naming has been politicized since 1776, with the only exception during World War II when so many ships were needed so quickly.

In 1971 when Adm. Hyman Rickover, the “Father of the Nuclear Navy,” was asked why the tradition of naming submarines for sea life had been replaced by the names of cities, he replied, “Fish don’t vote.”

Mabus took some heat from critics for naming two T-AKE ammunition cargo ships after a pair of human rights activists. The “Medgar Evers” was named after a black civil rights activist assassinated in 1963, and the namesake of the “Cesar Chavez” had championed the rights of millions of migrant farm workers.

T-AKE ships are named for “famous explorers,” but by the time Mabus became Navy secretary in 2009, his predecessor had expanded the scope of the category by naming a ship “Amelia Mary Earhart,” for the early aviator’s “courage, vision, and groundbreaking achievements, both in aviation and for women.”

Mabus found the links between the two famous civil rights “trailblazers” and the T-AKE naming convention for explorers to be “both clear and strong,” the report said.

The choice of Gabrielle Giffords as a namesake for a littoral combat ship was a deviation of the naming convention for that type of ship, which to that point were named after U.S. cities.

The name “Tucson” could have been a way to recognize both Giffords and others harmed at the shooting. Unfortunately, that city’s name was already in use on a submarine.

“As a result, once Secretary Mabus decided to honor Congresswoman Giffords, the only path forward was to make an exception to an established type naming convention,” the report said.