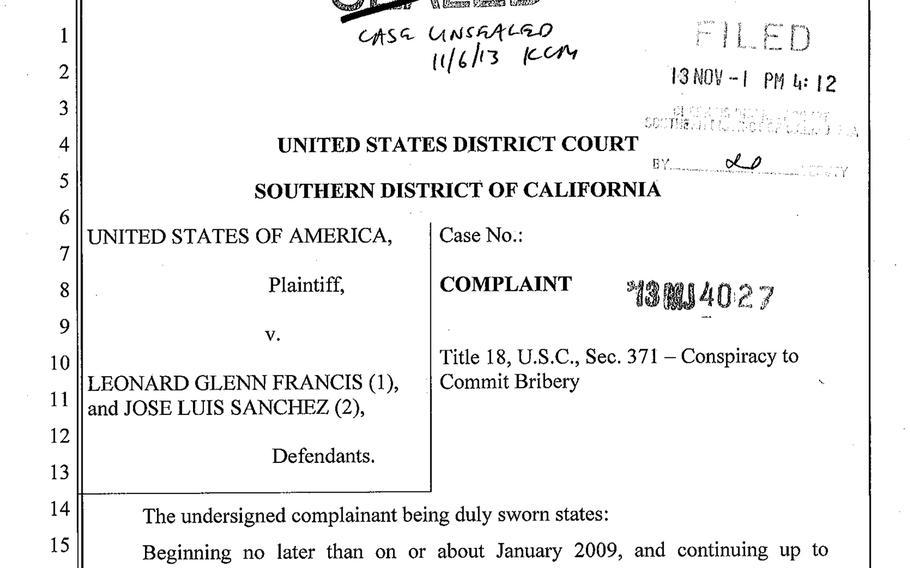 Cmdr. Jose Luis Sanchez, 42, confirmed the accuracy of a 24-page plea agreement Tuesday that detailed his dealings with a Singapore-based military contractor that provided services to ships in ports, according to The Associated Press.

Sanchez served as the executive officer for Fleet Logistics Center Yokosuka until April 2013. He accepted more than $100,000, along with travel expenses and services from prostitutes, in exchange for providing internal Navy information to contractor Glenn Defense Marine Asia, according to the federal court complaint.

Robert Huie, an assistant U.S. attorney, told reporters that Sanchez admitted to taking the bribes for more than four years, according to AP.

U.S. Magistrate Judge David Bartick agreed to let Sanchez remove a GPS monitor while free on bond and allowed him to back the bond with assets held by his mother and sister instead of his own property, according to AP.

Sanchez began sending classified ship schedules to GDMA in 2009 to Leonard Glenn Francis, known alternately as “Fat Leonard” and the “Lion King” in email traffic between the two, according to court documents.

Francis, a Malaysian national who was arrested in 2013, has pleaded not guilty to bribery and conspiracy charges.

Sanchez was working as director of operations at Navy Fleet Logistics Center Singapore when he first began accepting bribes from GDMA, according to court documents.

GDMA and Navy officials conspired to steer U.S 7th Fleet ships to ports where GDMA could overcharge the Navy for refueling, water, electricity and other pierside services. Department of Justice officials estimate the scheme cost the Navy more than $20 million.

Sanchez also sent messages in 2009 alerting Francis to Navy concerns that GDMA overcharged an aircraft carrier for a visit to Port Klang, Malaysia.

The concerns apparently had no effect. In 2011, Naval Supply Systems Command awarded GDMA three regional contracts to support ships throughout the Asia-Pacific region. The Southeast Asia contract alone was valued at $25 million annually, with an option to extend for four years.

Edmond A. Aruffo, who retired in 2007 as a lieutenant commander and went to work for GDMA, pleaded guilty to one count of conspiring to defraud the U.S. government in July. Francis’s cousin, Alex Wisidagama, has also pleaded guilty.

Cmdr. Michael Vannak Khem Misiewicz, a captain-select who commanded USS Mustin and later served as deputy operations officer aboard USS Blue Ridge, was the first Navy officer arrested for his alleged role in the bribery ring. He has pleaded not guilty.

Vice Adm. Ted Branch, Rear Adm. Bruce Loveless and former USS Bonhomme Richard commander Capt. Daniel Dusek have all been under investigation in relation to the scandal but not charged, Navy officials have stated.

Branch, the Navy’s director of intelligence, has not been able to view classified material since November 2013.