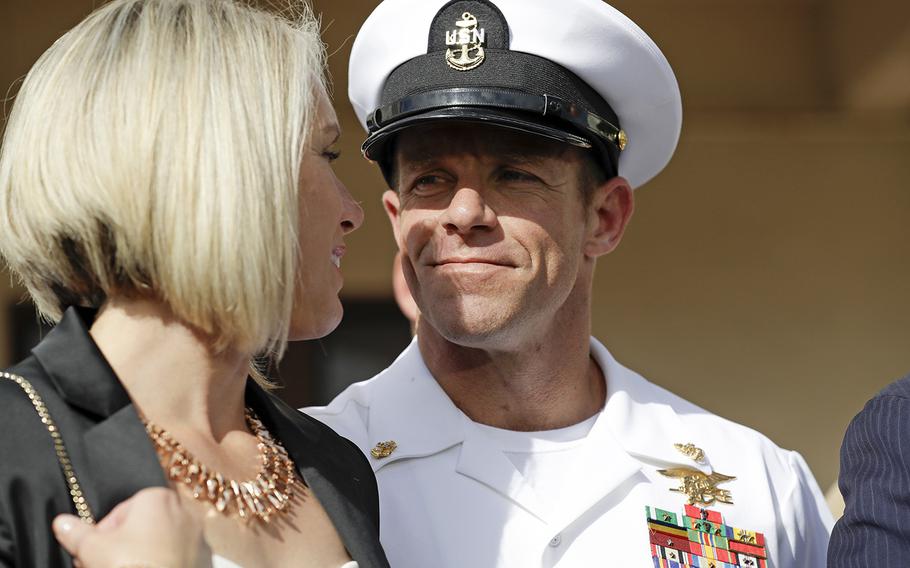 In this July 2, 2019 photo, Navy Special Operations Chief Edward Gallagher, right, walks with his wife, Andrea Gallagher as they leave a military court on Naval Base San Diego, in San Diego. (Gregory Bull/AP)

WASHINGTON — The former lead prosecutor in the court-martial of Navy SEAL Chief Petty Officer Edward Gallagher was reassigned Tuesday, the latest service shakeup as the Navy reviews the performance of the Judge Advocate General Corps.

Cmdr. Chris Czaplak was the senior trial counsel during the Gallagher court-martial until he was taken off the case in June after concerns were raised by defense lawyers about Gallagher’s ability to have a fair trial when it became known Czaplak had participated in a Naval Criminal Investigative Service investigation looking into leaks to the media about the case. Gallagher was accused of committing several war crimes during a deployment to Iraq in 2017, including the killing of a wounded Islamic State combatant.

It was done “in an effort to move the [department] forward,” Cmdr. Jereal Dorsey, a Navy spokesman, said in a statement. The new senior trial counsel for the department will be Cmdr. Phil Hamon.

The Navy’s recent string of high-profile crimes and scandals have led to internal reviews of practices within the service. As part of those examinations, Adm. John Richardson, the chief of naval operations, has called for a comprehensive review into the leadership and performance of the Navy’s JAG corps. Vice Chief of Naval Operations Adm. Bob Burke will lead the review.

Two weeks ago, the Navy’s top SEAL, Rear Adm. Collin Green, commander of Naval Special Warfare Command, wrote in a letter to the elite force that he had ordered an ethics review of the command, telling them that “we have a problem” within the community, after it has been plagued by allegations of crimes and other misconduct.

In May, it was discovered Czaplak had embedded tracking software in an email to defense lawyers for Gallagher as well as Navy SEAL Lt. Jacob Portier, as part of an NCIS investigation into leaks to the media, the San Diego Union-Tribune reported.

Portier had been charged for conduct unbecoming an officer for having a re-enlistment ceremony for Gallagher next to the dead body of the ISIS fighter who Gallagher was accused of stabbing to death when the prisoner was being treated for injuries. Richardson dismissed all charges against Portier on Aug. 1 and Gallagher was found not guilty in the fighter’s death.

The judge for the Gallagher trial, Navy Capt. Aaron Rugh, stated in his ruling to remove Czaplak as a prosecutor in the trial that the “court concludes that the matter related to Cmdr. Czaplak's participation in the NCIS operation may reasonably create a conflict requiring his withdrawal under due process,” the website Task and Purpose reported in June.

At the end of July, Navy Secretary Richard Spencer rescinded several military awards given to prosecutors in the Gallagher case after President Donald Trump directed him to do so. The president had tweeted the prosecutors were “ridiculously” given the Navy Achievement Medal.

“Not only did they lose the case, they had difficulty with respect to information that may have been obtained from opposing lawyers and for giving immunity in a totally incompetent fashion,” Trump wrote.