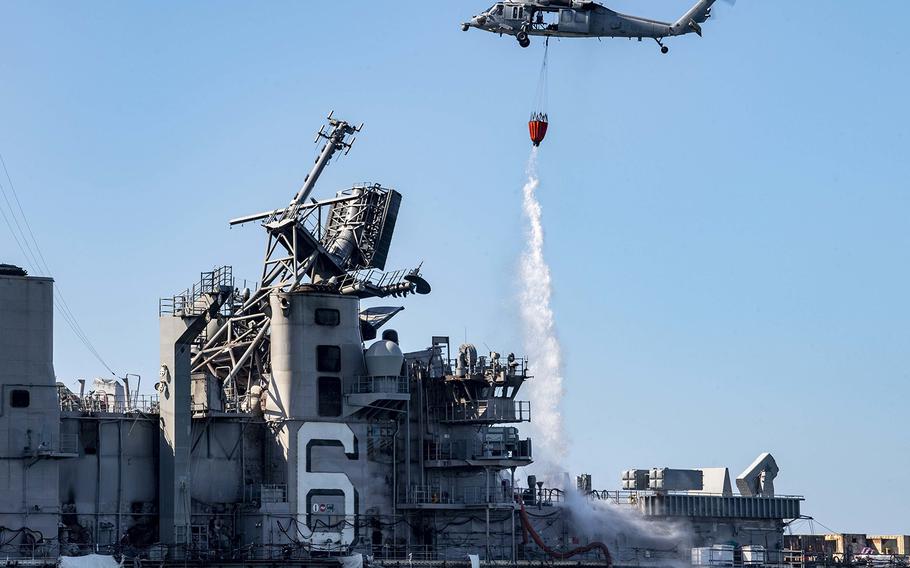 WASHINGTON — The fire aboard the USS Bonhomme Richard have been extinguished, the ship’s group commander announced Thursday.

“Our fire teams are investigating every space to verify the absence of fire. Until every space is checked and there are no active fires, we will not be able to commence any official investigations,” Rear Adm. Philip Sobeck, the commander of Expeditionary Strike Group 3, said in a prepared statement. The Bonhomme Richard is part of the expeditionary strike group.

With the fire out, the Navy will be able to find answers to how the blaze started and what the future holds for the amphibious assault ship, which was about two-thirds of the way through its maintenance work at Naval Base San Diego when the fire started.

“We did not know the origin of the fire. We do not know the extent of the damage. It is too early to make any predictions or promises of what the future of the ship will be,” Sobeck said. “We cannot make any conclusions until the investigation is complete.”

Since the fire began Sunday morning, it spread throughout the ship from the cargo hold, where Navy officials believe it started. The fire destroyed the ship’s forward mast and damaged its superstructure.

The effort for the past four days involved more than 400 sailors from 12 San Diego-based ships and more than 1,500 water bucket drops from helicopters.

As of Thursday, 40 sailors and 23 civilians have been treated for minor injuries, including heat exhaustion and smoke inhalation, while fighting the fire, according to the Navy.

During a news conference Thursday afternoon, Sobeck described the efforts of two sailors who had worked to help put out the blaze. Damage Controlman 2nd Class Jeffrey Garvin, the ship’s fire marshal hailing from Belmont, Mich., ran towards the fire after the first reports of smoke. Garvin continued to stay on scene and survived two explosions on the ship as he helped to battle the blaze. Each time, he was assessed for a concussion and able to return to duty, according to Sobeck. After returning from the second explosion, which Sobeck mentioned for the first time Thursday, Garvin assisted with the effort from outside the ship.

Lt. j.g. Bernado Tinoco, a Dallas native, led multiple teams aboard the Bonhomme Richard to set up safe and stable routes to allow fire teams to navigate through the ship.

Firefighters had to move from compartment to compartment to contain the fire and encountered fallen debris such as scaffolding from the maintenance work that was being done. The heat from the fire rose as high as 1,200 degrees, Sobeck said at the news conference. Firefighters will continue combing through each compartment of the ship looking for hot spots to put out.

There was concern about the roughly 1 million gallons of fuel that is aboard the ship, but the fire and heat sources stayed above the tanks.

The ship has also been leaning on its side because of the amount of water that has been used within the ship and from above it to put out the flames and keep it cool for firefighters to work. Wednesday evening the water on the ship began to shift from the starboard side to the port side due to what is called a “free surface effect,” Sobeck said. This caused firefighters to evacuate, but they were able to return within an hour and removing the water from the ship is ongoing to stop that effect.

“What we do know is that brave sailors from commands all across San Diego worked tirelessly alongside federal firefighters to get this fire extinguished and I want to thank them for their efforts. This was a Navy team effort,” Sobeck said in the prepared statement.