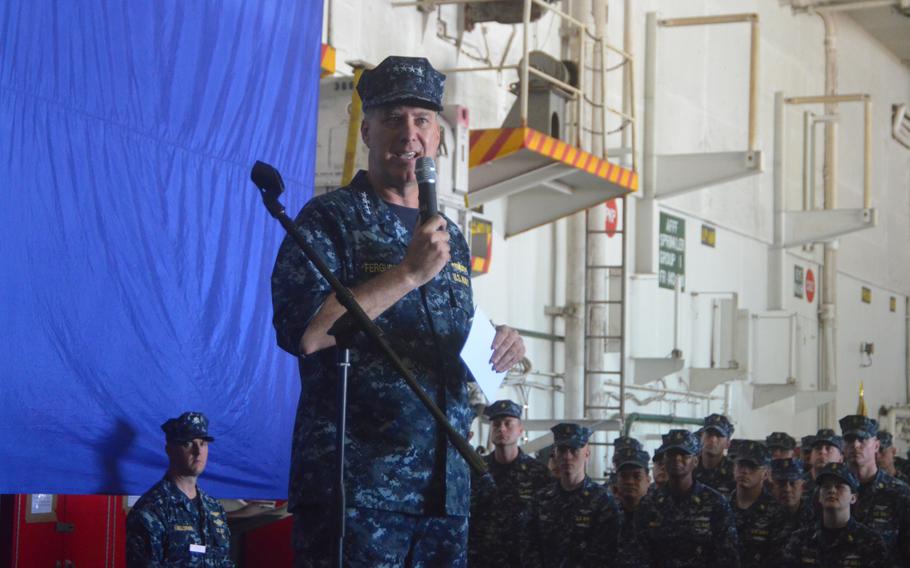 Adm. Mark Ferguson, the vice chief of naval operations, talks with sailors on the hangar deck of the aircraft carrier USS George Washington at Yokosuka Naval Base, Japan, on Aug. 28, 2013. Ferguson talked mainly about the potential effect of federal budget cuts under sequestration, as well as the military's need to reduce sexual assault incidents. (Erik Slavin/Stars and Stripes)

YOKOSUKA NAVAL BASE, Japan — The Navy is probably going to get smaller and keep its forces deployed longer to make up for sequestration budget cuts that could last into the next decade, the service’s second-in-command officer said Wednesday.

Adm. Mark Ferguson told sailors aboard the aircraft carrier USS George Washington that forward-deployed ships like their own would continue to receive the best equipment and training available — but at a cost to other units.

As the Navy seeks ways to cut $14 billion next year and plans for similar cuts through 2021, the vast majority of non-deployed ships will remain only marginally ready for combat.

For perspective on the size of the potential cuts, Ferguson noted that $14 billion was more than the service’s shipbuilding plan and nearly equal to its aviation budget.

“By the end of next year, we think that about 80 percent of the non-deployed forces in the United States will be C3 or C4 in readiness,” Ferguson said. “And we’re doing that to ensure that you have the resources forward.”

The military quantifies unit readiness using five “C” levels, which factor in personnel, supply, equipment and training. At C3, a ship may be trained for major portions of a combat operation but may be vulnerable and require “significant compensation for deficiencies,” according to Joint Staff definitions. A C4 unit requires even more resources and training for combat capability.

About half of the fleet would normally be at those levels while preparing for deployment, according to April congressional testimony from Navy officials.

With so many stateside ships at lower readiness states, those already underway will likely see patrols last beyond the average six-month tour.

“You will see deployments start to get lengthened in order to provide coverage while we wait for the regeneration,” Ferguson told Stars and Stripes following his meeting with sailors.

This year’s across-the-board defense budget cuts, which were enacted after President Barack Obama and Congress could not agree on targeted spending reductions, have already slashed days at sea and construction, among other areas.

Obama has exempted personnel cuts from sequestration this year — a relief to a force that has shed tens of thousands of sailors involuntarily in recent years.

Sailors might face a rougher road to re-enlistment in any future sequestration years. Personnel levels are “tied to the force structure decisions to be made on how many ships and aircraft and submarines [retained] ... but we don’t have any of those plans right now,” Ferguson said.

Senior leaders in each of the services have all said they want to avoid “hollowing the force,” leaving it with lots of weapons without the personnel to use and maintain them.

However, the Pentagon’s Strategic Choices and Management Review did propose deep manpower cuts across the military as one possible option, with the Army bearing the brunt. At least three Washington think tanks made similar suggestions.

Other proposals have included cutting carrier groups and air wings, which would require fewer sailors.

“The Navy under sequestration ... will be smaller,” Ferguson said. “It will be fewer ships, it will be fewer planes, but it will be no less ready, and we will always invest in technology and capability for the future.”

Although the Navy has done its best to minimize sequestration pain to its overseas operations, it has seen its capacity to respond decline. Only one carrier strike group remains “surge ready” for immediate combat, instead of the three carrier strike groups normally on call.

“I think where the real impact will come is in response to a crisis, if it goes beyond the forces that are already there,” Ferguson said.

He said he was unable to immediately comment on how the limited surge capability might impact operations near Syria, where the U.S. has positioned four guided-missile destroyers nearby.