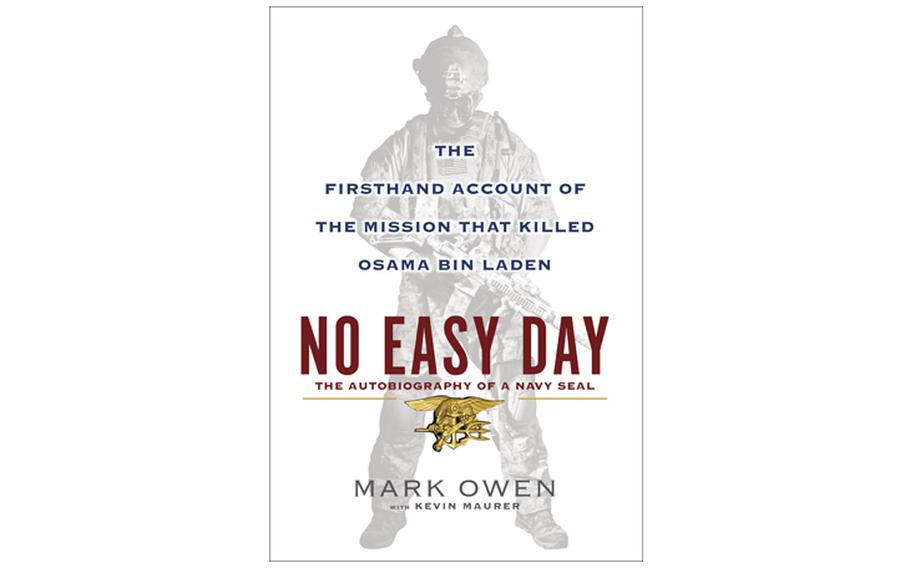 This book cover image released by Dutton shows "No Easy Day: The Firsthand Account of the Mission that Killed Osama Bin Laden." (Dutton)

WASHINGTON &mdash; The Defense Department believes a former Navy SEAL breached non-disclosure agreements by not submitting his firsthand account of the raid that killed Osama bin Laden to the Pentagon for pre-publication review and is considering legal action against him.

The Pentagon&rsquo;s top lawyer, Jeh Johnson, sent a letter to the author of &ldquo;No Easy Day&rdquo; on Thursday, informing him that the Defense Department has decided he is &ldquo;in material breach and violation of the non-disclosure agreements [he] signed&rdquo; and that &ldquo;further public dissemination&rdquo; of the book will aggravate the breach.

The author is identified in the letter by his pen name, Mark Owen. After news of the book&rsquo;s publication reached the media, the author was publicly identified as former SEAL Matt Bissonnette.

The Pentagon first learned of the book last week and received a copy a day or two later, Pentagon spokesman George Little said. He would not say whether Pentagon officials believe the book contains classified information, but said that review of the book is not complete.

&ldquo;When you write something that may contain classified information, you have to go through pre-publication review. That did not occur in this case,&rdquo; Little said Friday. &ldquo;The letter &hellip; is intended to put on record our very serious concerns.&rdquo;

Bissonnette signed two agreements with the Defense Department and U.S. government Jan. 24, 2007, promising to &ldquo;never divulge&rdquo; classified information and agreeing to submit any potential manuscripts for pre-publication security review, according to the letter.

The Pentagon is considering &ldquo;all remedies legally available&rdquo; against the author and anyone he worked with, Johnson wrote in the letter.

In 2010, the Defense Department bought and destroyed thousands of copies of an Army Reserve officer&rsquo;s memoir because officials believed some of the information in the book could harm national security.

On Friday, Little said the letter to Bissonnette &ldquo;is not meant to be any kind of measure of intimidation.&rdquo;

The Defense Department would &ldquo;applaud anyone who participated in one of the most successful military and intelligence operations in U.S. history,&rdquo; Little said. &ldquo;But even those who participated in such a mission have very serious and enduring obligations to follow the process and to help protect classified information.&rdquo;

Little said the release of some information about the bin Laden raid by the Obama administration was &ldquo;the appropriate thing to do for this nation,&rdquo; and that the book&rsquo;s publication is different because Bissonnette did not follow proper procedures.

&ldquo;There are appropriate channels &hellip; and then there are other channels,&rdquo; Little said.

Bissonnette&rsquo;s description of the raid differs from what had been released. In the book, a SEAL is depicted shooting an unarmed bin Laden in the head as he peeked out of an upper-story bedroom. Bissonnette and another SEAL entered the bedroom and pumped several more rounds into the terrorist leader, who was convulsing on the ground, according to the book. In earlier administration accounts, the SEALS shot bin Laden inside the bedroom, and initial accounts suggested he had been armed.

It&rsquo;s unacceptable if the book discloses information damaging to national security, he said, &ldquo;but if you&rsquo;re just talking about the political end of it and saying, &lsquo;Hey, here&rsquo;s how it really happened,&rsquo; then I think military members not only have the right to set the record straight, they have the responsibility once they&rsquo;re separated.&rdquo;

In an author&rsquo;s note at the beginning of the book, Bissonnette wrote that it is important to him that no classified information is released.

&ldquo;If you are looking for secrets, this is not your book,&rdquo; he wrote, noting that he hired a former special operations attorney to review the manuscript.

Juan Zarate, a senior adviser to the Center for Strategic and International Studies and former deputy national security adviser, said the Defense Department&rsquo;s threats of legal action may be a way to get former servicemembers and politicians alike to keep their mouths shut about classified missions.

&ldquo;The Pentagon has not been happy about any of the discussions about the raid -- including from the White House,&rdquo; he said. &ldquo;They likely want to stop the precedent of service people of writing books about sensitive operations -- and the investigation is one way of doing that.&rdquo;

Rep. Peter King, chairman of the House Homeland Security Committee, said Friday in a statement that all national security leaks &ldquo;are wrong and should be prosecuted to the fullest extent possible,&rdquo; whether they are made by administration officials or Special Forces troops.

&ldquo;No Easy Day,&rdquo; co-authored by journalist Kevin Maurer, was scheduled for release Sept. 11, but now will be released Tuesday.

The Associated Press and Stars and Stripes reporter Chris Carroll contributed to this report.