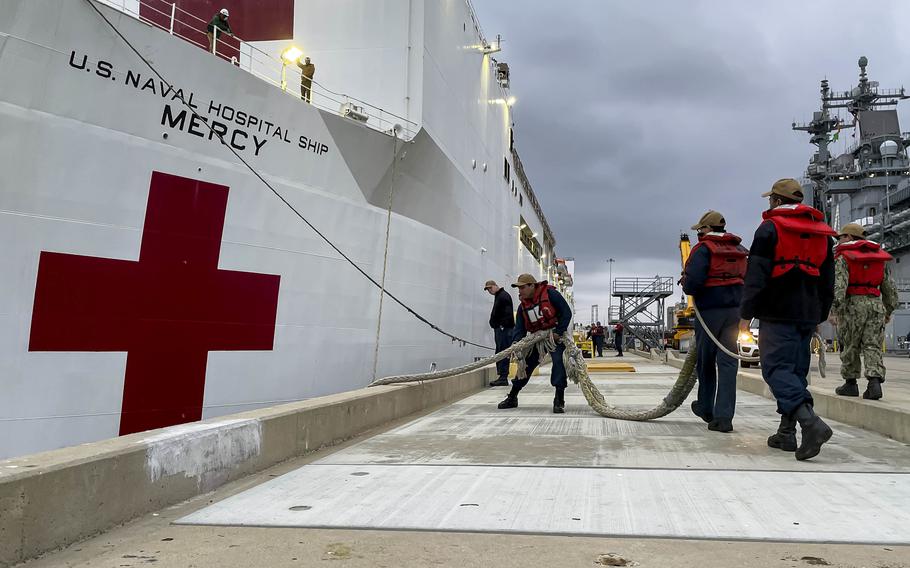 The hospital ship USNS Mercy recently steamed out of San Diego Bay, kicking off an annual mission focused on disaster preparedness and humanitarian assistance across the Pacific.

Now in its 17th year, Pacific Partnership brings together medical professionals from several nations to provide health care and other services in Pacific nations like Micronesia, Malaysia, the Marshall Islands, Thailand, Timor-Leste, Vietnam and the Philippines.

“Pacific Partnership is a unifying mission that builds trust among nations to work efficiently together in preparing to respond in crisis,” Capt. Hank Kim, the mission’s commander, said in a Task Force 73 news release May 3, the same day the Mercy left California.

The mission is expected to last for several months, Pacific Partnership ‘22 spokeswoman Leslie Hull-Ryde told Stars and Stripes in a Wednesday email. Past missions have lasted up to 150 days.

Last year’s Pacific Partnership included a humanitarian assistance and disaster relief workshop with Taiwanese disaster management experts in Palau, where participants learned about early warning systems, search and rescue and other topics, according to an Aug. 13 news release from U.S. Indo-Pacific Command.

“We can really learn from sharing our experiences and capacity building,” Republic of Palau Vice President J. Uduch Sengebau Senior said in the release. “This is essential for us to survive disasters and save lives in our community.”

Originally developed as a response to the December 2004 tsunami that devastated parts of South and Southeast Asia after a 9.1 magnitude earthquake struck off Indonesia’s cast, Pacific Partnership has changed over the years to focus on strengthening relationships with other nations rather than only providing direct medical care.

The Mercy was joined in the past by its sister ship, the USNS Comfort, which is undergoing a $26 million overhaul in Mobile, Ala., according to an April 29 report by Alabama news website AL.com.

The 894-foot ships are former oil tankers gutted and remade into floating, 1,000-bed hospitals. In 2018, Navy leaders considered scrapping one of them to save money but backpedaled after the House Armed Services Committee objected.

A separate humanitarian mission, Marara ’22, kicked off in the region on May 8. The 13-country exercise led by the French military will focus on disaster-relief drills in French Polynesia, the U.S. Army said in a Monday news release.

The U.S. Navy, Marine Corps and Coast Guard are among the exercise’s participants.

Joining for the first time are representatives from the Japan Self-Defense Forces, according to a Friday announcement from the country’s Joint Staff.

Japan hopes its involvement will “enhance mutual understanding and to strengthen the trust relationship with participating countries as well as to improve the capability to carry out international emergency relief activities,” according to the statement.