ABOARD THE USS HARRY S. TRUMAN — U.S. and NATO officials said that the Russian military was shadowing U.S. ships participating in a multinational exercise in the Adriatic Sea, adding that “outside observance” wasn’t unusual and not necessarily related to rising tensions over Ukraine.

The comments Wednesday came as the U.S. announced that it will send 3,000 more troops to Europe to bolster NATO allies amid concerns that more than 100,000 Russian troops positioned along Ukraine’s borders will invade the country.

The Guardian newspaper and other media outlets also reported that six amphibious Russian warships from the Baltic Sea sailed into the Mediterranean Sea last week. 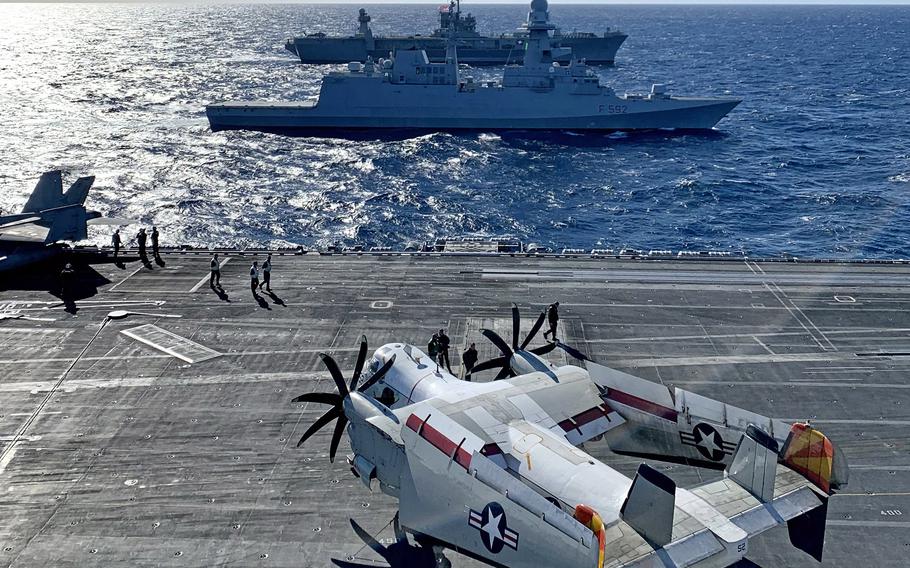 U.S. and allied ships sail in formation with the aircraft carrier USS Harry S. Truman in the Adriatic Sea on Wednesday, Feb. 2, 2022. (Alison Bath/Stars and Stripes)

The Russian Defense Ministry said the ships will take part in naval maneuvers, according to The Drive, an online news site.

U.S. Navy ships and aircraft routinely operate in the vicinity of Russian military units in the Mediterranean and other areas, said Lt. Cmdr. Karl Schonberg, a spokesman for U.S. 6th Fleet. The interactions are especially common in constrained waterways, such as the Black, Mediterranean and Adriatic seas, he said. 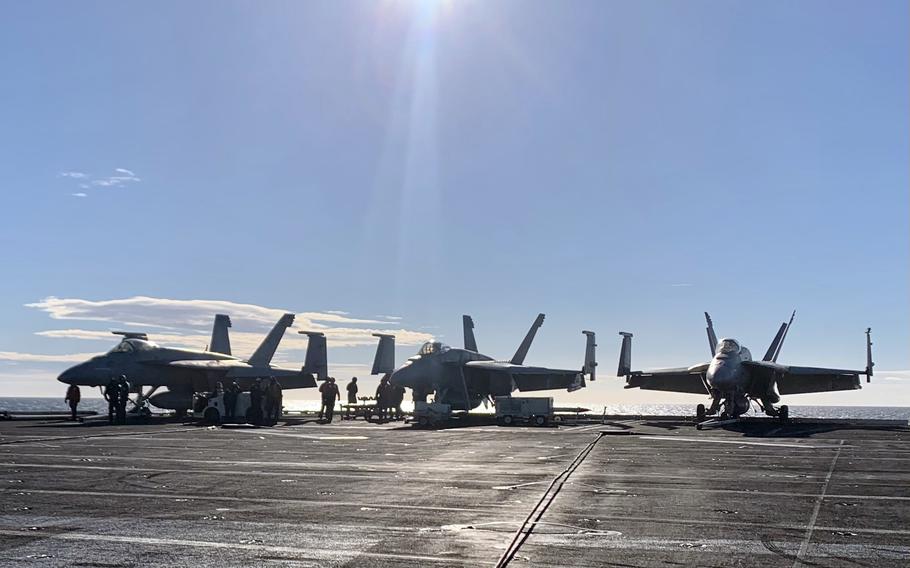 Jets sit on the deck of the aircraft carrier USS Harry S. Truman in the Adriatic Sea on Wednesday, February 2, 2022. The Truman was participating in Neptune Strike 2022, a NATO-led exercise. (Alison Bath/Stars and Stripes)

Schonberg did not directly comment about recent encounters but characterized the majority of interactions as safe, professional and compliant with international law. However, the Navy has in recent years released video of Russian aircraft flying very closely to U.S. ships and planes in maneuvers that service officials deemed dangerous.

U.S. and NATO officials aboard the USS Harry S. Truman wouldn’t say where the carrier strike group would be sent after the Neptune Strike 2022 exercise ends Friday. NATO officials described Neptune as a “vigilance activity” that “reflects routine deterrence activities aimed at ensuring peace and stability.” 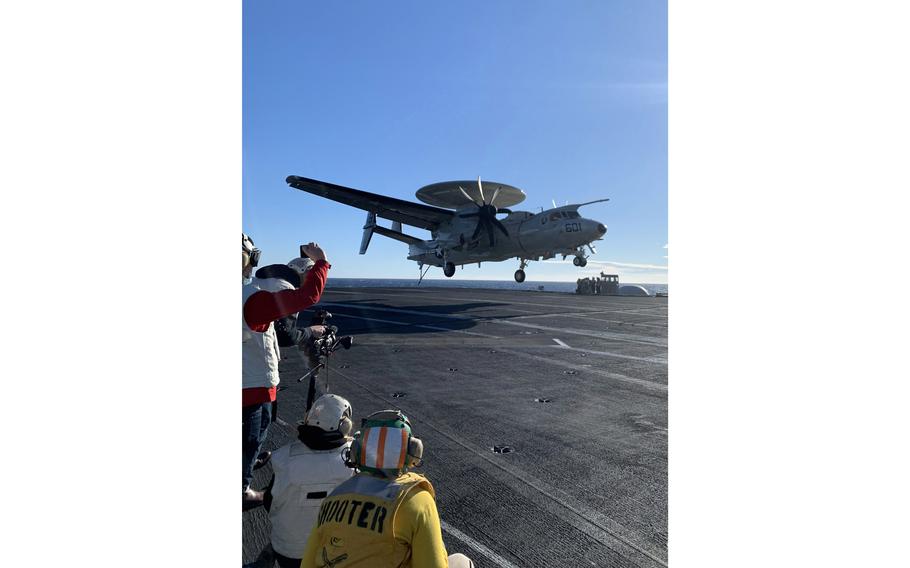 An Airborne early warning and control plane, or AWACS, lands on the USS Harry S. Truman in the Adriatic Sea on Wednesday, Feb. 2, 2022. (Alison Bath/Stars and Stripes)

“We planned to be able to operate wherever we are needed most, so we’re needed here most right now (operating with NATO),” Renshaw said.

While emphasizing NATO’s strength, Renshaw said his job was to ensure that the strike group could “provide that capability to dominate a maritime environment, to provide security” should officials decide it is needed.

Renshaw also pointed out the strike group’s ability to coordinate with counterparts as far away as the Netherlands and Poland. 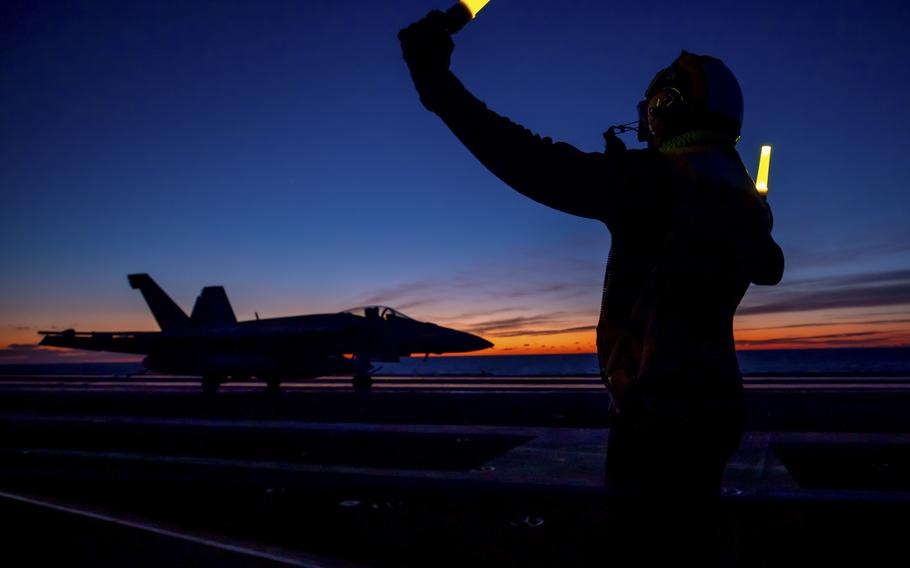 “What we bring to strategic decision-makers is that we are able to execute absolutely to perfection and integrate (with) partners, so that on a tactical level, we are on our game,” he said.

Recent Russian actions were not a determining factor in Truman’s participation in the event, said Rear Adm. Marco Papi, deputy chief of staff of operations for Naval Striking and Support Forces NATO.

Integrating the carrier was the culmination of years of work to refine the relationship between the U.S. fleet and the NATO strike force, Papi said.

U.S. officials announced Truman’s addition to the exercise last month, lauding it as the first time a carrier strike group would be under NATO control since the Cold War.

The carrier strike group was thought to have been assigned to U.S. 5th Fleet, which operates more in the Middle East, but was changed to 6th Fleet in mid-December, Renshaw said.