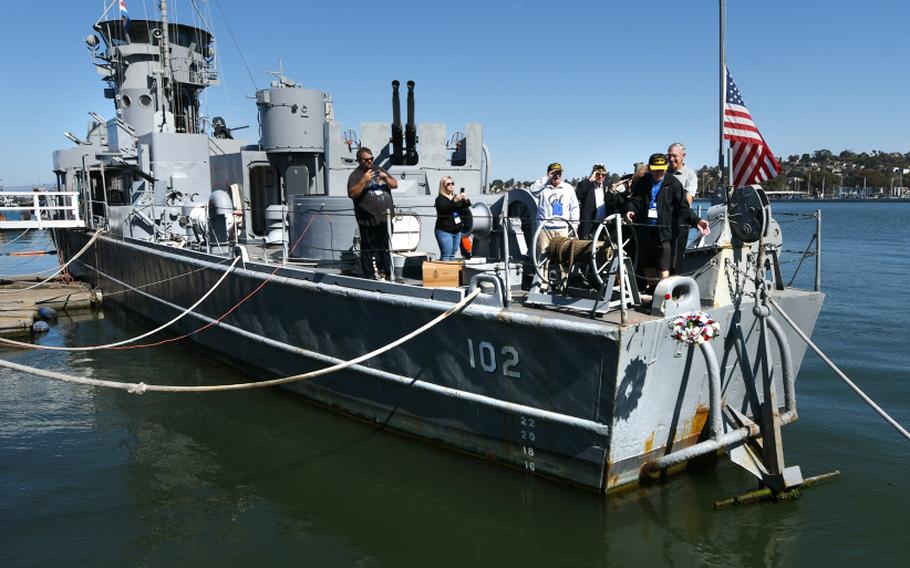 Veteran Ed Desmond tosses a memorial wreath off the back of the USS LCS 102 during the Landing Craft Support Museum 7th Annual Convention Memorial Service on Mare Island on Wednesday, Sept. 30, 2021. (Chris Riley, The Times-Herald/TNS)

Decades may have gone by since World War II, but those who gave their life in in the war — especially those that fought on a LCS (Landing Craft Support) — were honored and remembered Wednesday afternoon in a memorial service on Mare Island in front of the USS LCS-102.

It was a somber moment of reflection, especially for the final four LCS sailors, who went on board the USS LCS-102 and together tossed a wreath into the Napa River as a few dozen spectators and other veterans watched. A fifth veteran from Vallejo who fought in WWII and the Korean War joined the four last surviving LCS sailors — 96-year-old Preston Edwards and Ed Desmond, as well as 95-year-olds Bill Mason and Gill Nadeau.

The USS LCS 102 is a heavily armed World War II gunboat which has served since 2007 as a floating memorial and naval history museum located at the former Mare Island Navy Base. It is the last ship remaining from 130 of those ships that were built in 1944 and 1945 to provide extra close-in firepower and protect American and allied troops in the Pacific as they stormed the beaches of famous islands such as Iwo Jima, the Philippines and Okinawa.

The mission of these men and their ships was to provide gunfire support for the landing forces all the way to the shore and then remain close in, providing supportive firepower to the men on the beach. Their tremendous firepower and their ability to lurk just a few hundred yards or less from the shore earned them the nickname of “Mighty Midgets.”

“It means a lot to me,” Mason said about the ship and himself and the other veterans tossing the wreath into the river. “Especially that there are only four of us left. You think of a lot of things when on that ship. I think of “Burpie” who was the last surviving member of the LCS-86 (the ship Mason was on). You think of the Battle of Okinawa. I’m glad they brought this ship here (the LCS-102) back from Thailand so we could view it.”

Edwards made the trip all the way from North Carolina and was glad his family could be there with him to see the ship again.

“It’s amazing to step on it again even after all these years,” Edwards said. “All kinds of memories come back. It’s the only time I’ve seen the ship but I wouldn’t miss this chance for the world.”

Edwards still remembers what it was like to be on the LCS-70, caught in a typhoon that seemed to lift the ship seven stories in the air before coming crashing down. “The ship would rock and rock and you thought it was going to turn over. But it would straighten out,” he recalls. “I was glad to serve on it.”

Landing Craft Support Museum chairman Christopher Lehman reminded the audience that, in the space of just a few months, 26 of the 130 LCS ships built were either sunk or damaged beyond repair — resulting in the loss of thousands of lives. Lehman said that in February 1945, three LCS ships were sunk in just a few minutes in a middle-of-the-night attack by small and fast suicide boats packed with explosives.

In another battle in June of 1945, the LCS 122 was attacked by Japanese kamikaze suicide planes with a direct hit on the bridge of the ship. Commanding Officer LT Richard M. McCool was awarded the Congressional Medal of Honor for his bravery in saving his ship and rescuing sailors.

During the ceremony, a bell was tolled for each of the 56 sailors who had passed away since the last reunion. The names were read aloud, with the ship’s bell tolling and a white carnation being pinned to a wreath.

At the end of the ceremony, the group sang “God Bless America.” The somber sounds of Bag Pipes were then heard playing “Amazing Grace,” followed by a lone bugler playing “Taps.”

“There were four sailors here today, and I’m glad they were able to travel and see this, but we think of the over 10,000 sailors lost on a day like today,” Lehman said. “I have to give an absolute shout-out to the Mare Island Dry Docks for how they’ve maintained this ship. Especially people like Bill Dunbar, Steve DeLeo and Christina Snyder. It’s such a great thing to witness and I feel that most of the town doesn’t even know about it. It really is a hidden treasure in Vallejo.”

The Landing Craft Support Museum is located at 289 Waterfront Avenue on Mare Island. Tour guides provide tours of all areas of the museum ship, everywhere from the engine room to the pilothouse. The vessel is open to the public on Tuesdays, Thursdays and Saturdays from 9 a.m. to 3 p.m.. To learn more about the ship, the museum and countless other stories during the era visit the site www.usslcs102.org.