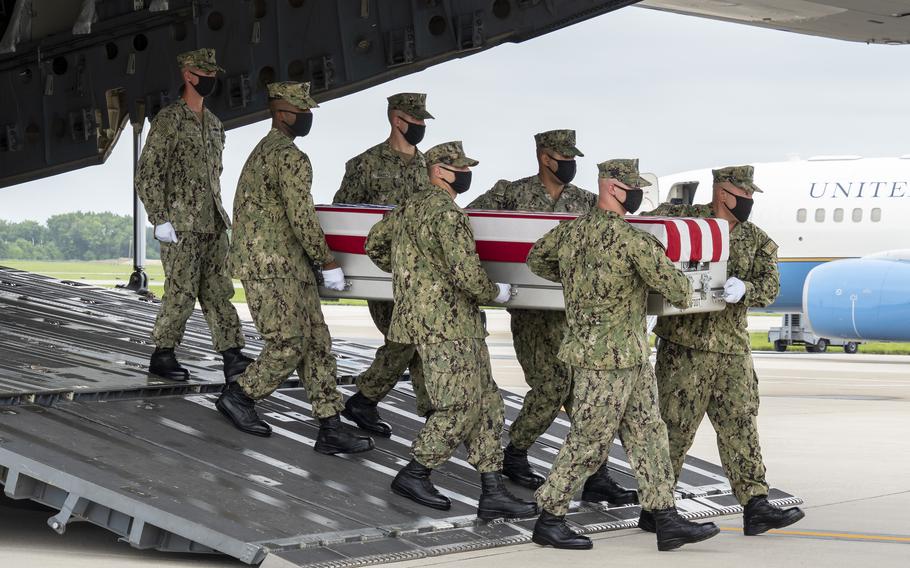 BERLIN HEIGHTS, Ohio (Tribune News Service) — Life in a small Ohio town stopped Wednesday to honor the 13 soldiers killed in the attack last month during the evacuation of Americans and others from an airport in Afghanistan.

This was personal as they were welcoming one of their own back home who perished in the attack.

Shopkeepers temporarily closed. Mechanics left their garages. And office workers skipped lunch and gathered outside of the courthouse. American flags covered the landscape of an already picturesque town.

People lined the streets as a long procession of motorcycles, police cars and other emergency vehicles made its way closer to Berlin Heights after a long, somber drive from Cleveland's Hopkins Airport to bring Navy Corpsman Maxton Soviak home.

Many shed a tear as the hearse passed carrying the young man they watched grow up as a boy and who grew into a man as he went off to serve his country in the Navy and eventually served next to Marines as a medic.

The procession made its way through Milan and then past Edison High School where he graduated from in 2017 and eventually to his hometown in nearby Berlin Heights.

His funeral will be Monday at the high school football stadium.

Across from the town square in Milan not far from a statue of famous inventor Thomas Edison, who was born there, stood Bob Doerner.

This loss hit close to home and close to his heart.

Doerner said he didn't know Soviak personally but he knew of his family. It's like that in small towns like Milan and Berlin Heights.

Doerner said he did watch Soviak play sports and shares in the loss of a young man as if he was one of his own.

"This area is a big family," he said.

He knows the danger of serving in the military and knows first hand the worry of a parent of someone in uniform.

His own son served as a Navy rescue swimmer in the Persian Gulf War and has a grandson who is now a pilot in the Air Force.

"It could have been anyone of us," he said.

He was killed Aug. 26 along with the other soldiers and some 90 Afghans during an attack by a pair of suicide bombers at the Abbey Gates of Hamid Karzai International Airport in Kabul during the frantic rush to evacuate Americans and Afghans after the country fell to the Taliban.

The Navy has already honored Soviak and posthumously advanced the sailor to the rank of Hospital Corpsman Third Class.

But on this day, it was time for others in his hometown to honor the fallen soldier.

Hundreds of motorcycles, police cars, fire trucks and military organizations were part of a motorcade that stretched for miles as it made its way from the Ohio Turnpike to the funeral home.

Police and fire departments from throughout Northwest and Northeast Ohio made the trek. Even police motorcycle officers from the Columbus Police Department made the 110-mile drive.

It took almost 20 minutes for the procession to pass. And when the last vehicle did drive off in the distance, most of those gathered lingered for a moment or two longer. Then they clapped to honor one of their own.

Among them was Jymmie Wetherbee, who stood out in the crowd in his old active duty Navy uniform.

The Wellington resident served five years in the Navy and now works with the Disabled American Veterans Department of Ohio.

He's no stranger to military funerals and serves on the honor guard at many rites. But usually they aren't as young as Soviak.

He usually wears his veteran darker uniform to such gatherings but on this day it just seem right to wear his crisp white active duty uniform.