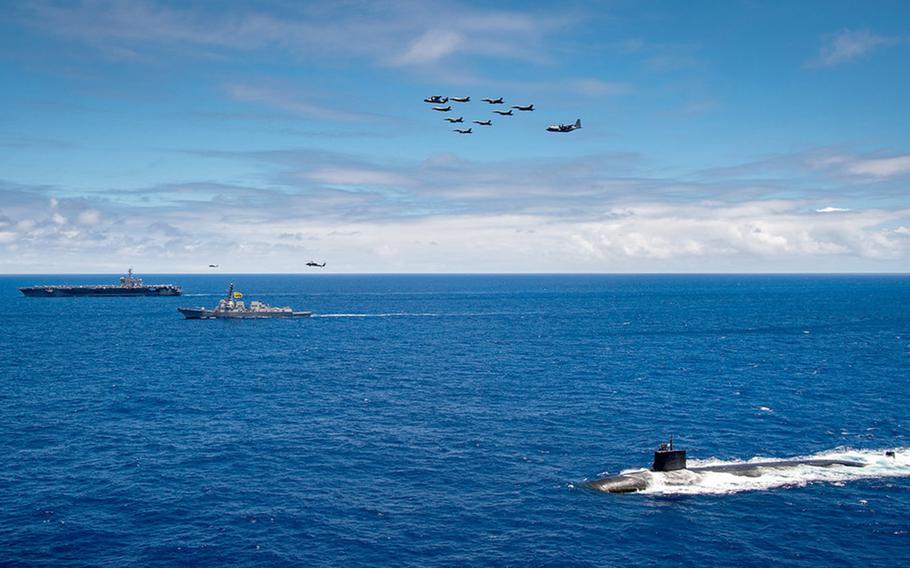 FORT SHAFTER, Hawaii — The USS Carl Vinson and its strike group spent the past two weeks training off the coast of Hawaii, just as the Russian navy held a massive exercise in nearby waters that included targeting a mock carrier strike group with missiles.

The Russian Defense Ministry on Monday published an online account of that training, which included a scenario that “worked out the tasks of detecting, countering and delivering missile strikes against an aircraft carrier strike group of a mock enemy.”

The U.S. Defense Department in recent years has shifted its strategic focus away from the Middle East and toward so-called “great-power competition” with China and Russia.

"Our strike group is prepared to carry out the full spectrum of missions, from humanitarian relief to combat operations,” Rear Adm. Dan Martin, commander of the Carrier Strike Group 1, said in a Navy news release last week.

“Synchronizing our capabilities through combined operations sharpens our edge and reinforces our commitment to a stable and secure global maritime environment.” Vice Adm. Steve Koehler, the commander of U.S. 3rd Fleet, said in the release.

The Carl Vinson completed a 17-month upgrade late last summer so it could support the newest generation of fighter jets, making it the Navy’s first carrier capable of handling both F-35C Lightning II fighters and CMV-22B Ospreys, the tiltrotor aircraft that can land vertically like a helicopter and fly like a fixed-wing plane.

“High-level training of joint forces ensures the U.S. military remains the preeminent military power in the region,” Capt. Jay Clark, the commodore of Destroyer Squadron 1, said in the Friday release. “These operations are vital to our readiness and are part of our routine presence throughout the western Pacific.” 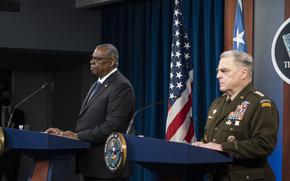 Milley: A Russian invasion of Ukraine would result in a ‘horrific’ number of casualties