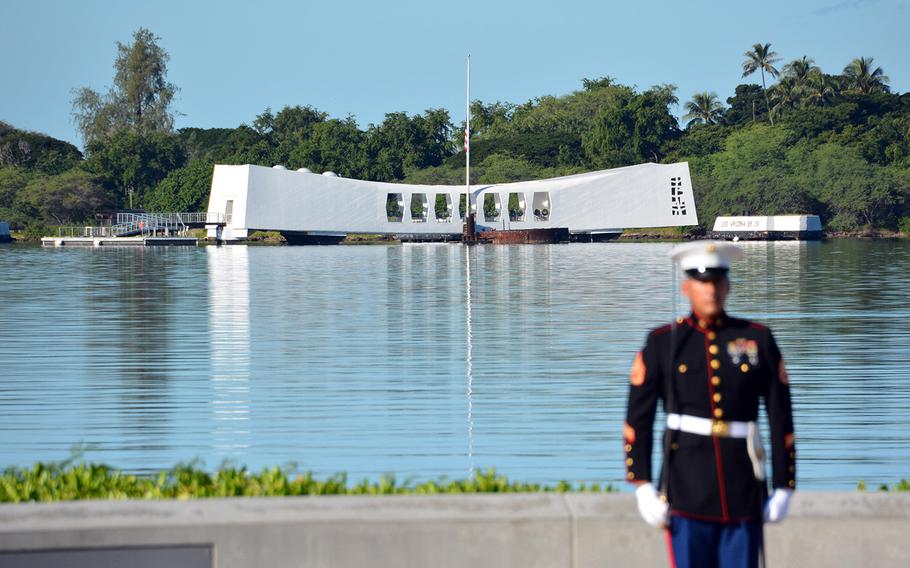 Buy Photo
A Marine stands with his back to the USS Arizona Memorial during a rifle salute Dec. 7, 2019, at the Pearl Harbor National Memorial that was part of a ceremony marking the 78th anniversary of the Japanese surprise attack on Oahu. (Wyatt Olson/Stars and Stripes)

HONOLULU (Tribune News Service) — The Defense POW/MIA Accounting Agency, the Navy and the Pentagon have a conundrum on their hands involving unidentified crew members from one of the most famous — and tragic — battleships of World War II, the USS Arizona.

The accounting agency, charged with investigating, recovering and identifying American service members missing from past wars, proposed disinterring 85 USS Arizona crew members buried as “unknowns “ at Punchbowl cemetery in Honolulu, but not for identification, which has been the practice for hundreds of other World War II remains.

Rather, DPAA, as it is known, suggested the unprecedented step of disinterring the Arizona crew and re-interring them, unidentified, back on the sunken battleship in Pearl Harbor.

More than 900 men remain entombed on the Arizona, which became a deadly inferno on Dec. 7, 1941, after a Japanese aerial bomb pierced its deck and ignited forward gunpowder magazines.

The proposal described as “preliminary“ and “notional“ represents a departure from the 2015 disinter-ment for identification of all 388 USS Oklahoma crew “unknowns“ at Punchbowl, officially known as the National Memorial Cemetery of the Pacific.

The accounting agency is nearing the end of that project, with an expected 90% identification rate for return to families.

DPAA has exhumed casualties from the USS West Virginia and USS California and the 1943 Battle of Tarawa, along with hundreds from the Korean War, to boost its annual identification totals.

It’s now planning to disinter from Punchbowl about 400 buried as unknowns who died as prisoners of war on Japanese transport ships, including the Enoura Maru, whose conditions were so bad they were called “hellships.”

Some USS Arizona families with still-missing relatives are not at all happy with DPAA’s proposed departure from the norm.

“They fly all over the world to bring our servicemen home and identify them and return them to their families,“ said Teri Mann-Whyatt, 50, whose uncle, William E. “Billy“ Mann, was a gunner’s mate 3rd class on the famed battleship. “The USS Arizona is a flagship in our country to never forget, and we’re going to forget them?

“Why are they not important? Why are they not worth it?” said the Seattle resident, who still gets choked up thinking about her lost uncle and his one still-living sibling, a sister who’s 93.

“We know that there’s means to identify them, and the Arizona members and their families deserve everything that everyone else has been given,“ Mann-Whyatt said.

The accounting agency, which ventures to the ends of the earth to make recoveries, says the identification of the 85 USS Arizona unknowns would be a “monumental“ scientific undertaking that would be much more difficult than the USS Oklahoma project.

As a very recent example of the lengths to which it does go, DPAA, which has a $155 million budget, recently sent a 24-person team on a 72-day mission to Belgium, where 1, 013 tons of soil were screened seeking the remains of one man, 1st Lt. Eugene Shauvin, a crew member on a C-47 that crashed in 1944.

But accounting agency Director Kelly McKeague said at a Feb. 20 online “family member update“ that “we could never take on“ the process of disinterring the 85 USS Arizona unknowns for identification, in part because DNA reference samples would have to be obtained from the families of all 1, 177 of the ship’s fatalities. 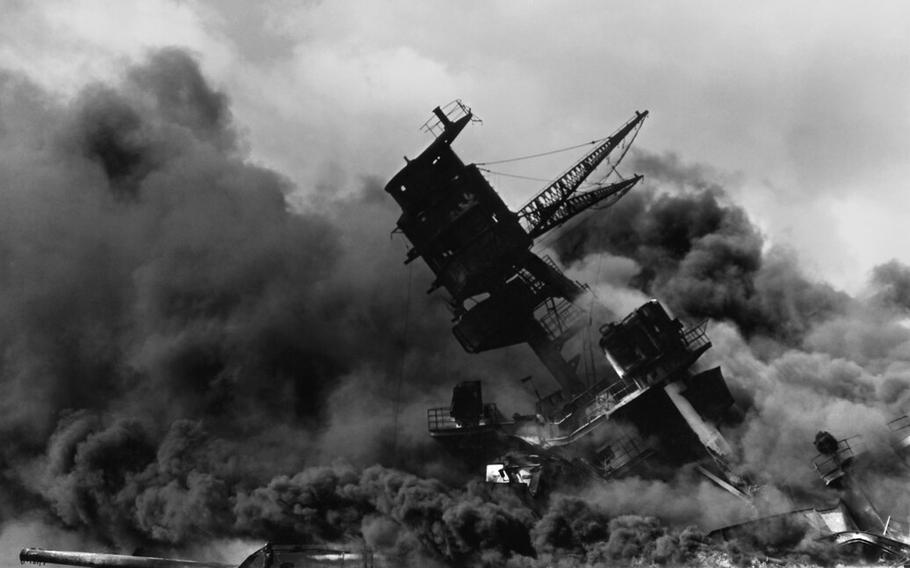 “We have had preliminary discussions with the Navy, and one of the proposals that we have notionally talked about is to disinter all of them — not for the purpose of identification — but to entomb them in the hull of the Arizona along with their shipmates,“ he said during the update.

In a subsequent interview with the Honolulu Star-­Advertiser, McKeague said “never is a strong word. Obviously, we could“ identify the crew members.

“My point ... was to say that right now, we have 12 of the 1, 177 (DNA) family reference samples on file” for the USS Arizona, he said. “We have reviewed 700 of the 1, 177 wartime records, personnel records, (and) within that we only found dental records for 130. We only found stature measurements for about half of them. Without those two pieces of data, searching for, again, 1,177 family reference samples would be a monumental task.”

McKeague said he estimates that 38,000 Americans still missing from the nation’s past wars are recoverable.

“In order to provide equitable treatment to all family members, it’s a balancing act for us to be able to assess the likelihood of identification in order to determine the appropriate use of limited resources,“ he said. “That’s what it comes down to. So it’s a balancing act; limited dollars, limited capacity and capabilities.”

Given the circumstances, identification of the Arizona unknowns “would not be prudent from our perspective,“ McKeague said.

The six-year Oklahoma identification project resulted in the exhumation of 388 crew members and the sequencing of more than 5,000 DNA samples, but DPAA noted all of that battleship’s unidentified crew member remains were recovered for analysis.

“All of them were there at the Punchbowl, as opposed to the Arizona, which is very unique that only 85 are there and the other 900-plus are in the hull of the ship,“ Mc ­Keague said.

The key point, he said, is that “we don’t have enough historical, biological, scientific evidence with which to pursue identification today“ of the Arizona remains at Punchbowl.

The accounting agency’s proposal, however conceptual it might be, to re-inter the 85 crew on the battleship memorial and grave stems from the disinterment of a presumed Arizona crew member 20 years ago who subsequently could never be identified.

The Defense Department has a relatively new policy that says remains kept in the lab for over four years need approval for further analysis or must be re-interred, Mc ­Keague said.

“We’re getting pressure from the Pentagon to re-­inter“ that one set of remains, he said, adding, “the question is where?” That dilemma prompted DPAA to question whether that one unidentified individual, as well as the 85 at Punchbowl, should be re-interred on the battleship.

“Last year, I had two preliminary conversations with the assistant secretary of the Navy for manpower and reserve affairs to propose that in order to account for all 1,072 unaccounted for from the Arizona, is there any interest in the Navy ... to disinter (the 85 ) to re-inter in the ship?” McKeague said.

Such a step would “achieve the fullest possible accounting of the entire USS Arizona crew, “ he said.

A total of 1,177 were killed on the Arizona — still the single greatest loss ever for the U.S. Navy — with 105 recovered and identified, he said. That resulted in 1,072 unaccounted for, with about 985 of those men still entombed on the ship, according to DPAA.

McKeague said the Navy is not open to the identification of the 85 Arizona unknowns, but any disinter-ment decision ultimately rests with the assistant secretary of defense for manpower and reserve affairs.

He also said the decision could be made to re-inter the one presumed Arizona crew member back in Punchbowl.

Some of the families of missing USS Arizona crew say they were not informed by DPAA of the disinterment possibility but now that they are aware of it, they want the men identified for a decision to be made by family as to where their final resting place should be.

Molly Baumann, 30, feels a connection to her great-great-uncle, Charles Casper Ehlert, a 3rd class signalman on the Arizona.

“He was a great artist,“ the Wisconsin resident said. “I have a drawing of the ship that he drew by hand, and he also drew the ship’s bell by hand. I have that as well.”

Her interest in Ehlert’s life “kind of grew into a thing : Who were all these men (on the Arizona ), and what did they do with their lives?” she said.

Arizona crew member Lauren Bruner related some of the time he spent on the Arizona with Ehlert, as well as his high school buddy, Billy Mann, in the book, “Second to the Last to Leave,“ a reference to Bruner’s last-minute escape from the burning ship on Dec. 7, 1941.

“We liked listening to Billy strum ‘Red Sails in the Sunset’ on his ol’ guitar,“ Bruner is quoted saying in the book. “When his singing and strumming wafted out across the harbor, everything sorta’ hushed up around the other ships, moored close by. Always believed they were listening, too.”

At the same time, “Casper would often work on one of his drawings ... of life aboard ship. Damn he was good. Of average build, only about 5-foot-7 in height, he was a hell of an artist.”

“I know the chances of my great-great-uncle being in those (85 ) remains is not very great, “ Baumann said, “but either way, I believe that they should be identified.”

Mann-Whyatt, the niece of crew member Billy Mann, said, “No matter what, if they can identify (the 85), they should go to every means possible to identify those men and return them to their homes.”

Randy Stratton, the son of Arizona crew member Don Stratton, who along with Bruner was badly burned but able to shimmy hand-over-hand across a rope 70 feet above Pearl Harbor to safety on the adjacent repair ship USS Vestal, already is lobbying for the disinterment and identification of the 85 crew.

Don Stratton and Bruner had sought posthumous recognition for years for Joe George, the Vestal sailor who threw them that rope. A Bronze Star with “V“ for valor was finally awarded in 2017. Stratton died at age 97 in 2020.

Randy Stratton said he’s already communicated with a DPAA official, letting her know he’s now on a mission to get the 85 men identified.

“I know this is going to take maybe three to five years, could be longer,“ Stratton said. “I said we’ve waited 80 (years), but let’s make sure we do this, that they identify those guys.”