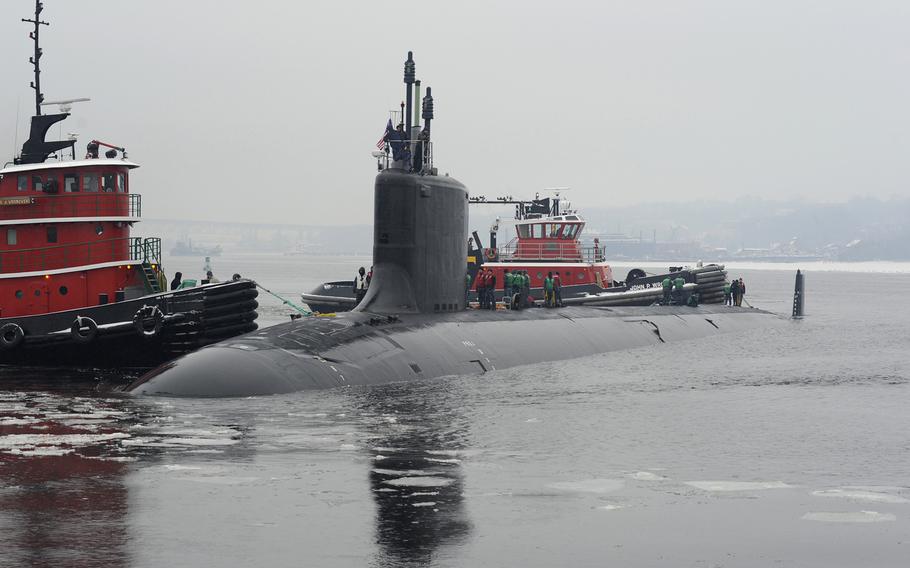 The first woman to serve aboard a Virginia-class fast-attack submarine reported last week to the USS Minnesota, pictured here arriving at its homeport in Groton, Conn. Six women, all officers, are joining the crews of the Minnesota and the USS Virginia in 2015. (Courtesy of the U.S. Navy)

The first woman to serve aboard a Navy fast-attack submarine has reported to the USS Minnesota. She is one of six officers expected to join fast-attack crews in the months ahead.

Two more women will report to the Minnesota by the end of January, with three more slated to join the USS Virginia in the spring, said Lt. Cmdr. Tommy Crosby, a spokesman for the Navy’s Submarine Force Atlantic.

Submarines were one of the few remaining areas of military service off-limits to women when the Navy lifted its prohibition in 2010. Three years later, the Pentagon removed the military-wide ban on women in combat units and required gender integration plans from each of the services.

The Navy’s 10 Virginia-class fast-attack submarines are armed with Tomahawk cruise missiles and designed to conduct surveillance, seek out and destroy other submarines and carry special operations forces. They are smaller and have tighter quarters than Ohio-class submarines, the designation for ballistic-missile and guided-missile boats. Fifteen officers typically make up the wardroom in both classes.

The plan to bring the six female officers aboard Virginia-class submarines was announced in 2013 by Vice Adm. Michael Connor, commander of Navy submarine forces. Two of the women were to be supply officers, with the other four nuclear trained. Submarine officers must first go through an intensive 18-month training.

The service says it will open positions for enlisted women on some Ohio-class submarines next year and for several Virginia-class subs in 2020. All future submarines will be designed for integrated crews, the Navy has said.

The Navy’s integration plans call for women to make up 20 percent of the enlisted crews on already-integrated Ohio-class submarines by 2020.

The Navy has described the integration process as smooth, although a recent episode aboard the Ohio-class USS Wyoming raises questions about that. The Navy investigated 12 petty officers for sharing and watching a video of a female officer showering aboard the submarine, according to the Navy Times. One of the petty officers made the recording and passed it along, according to the report.

Connor, the submarine force commander, has said two more fast-attack subs will be integrated next fiscal year, this time in the Pacific. The Minnesota and Virginia are ported in Groton, Conn.