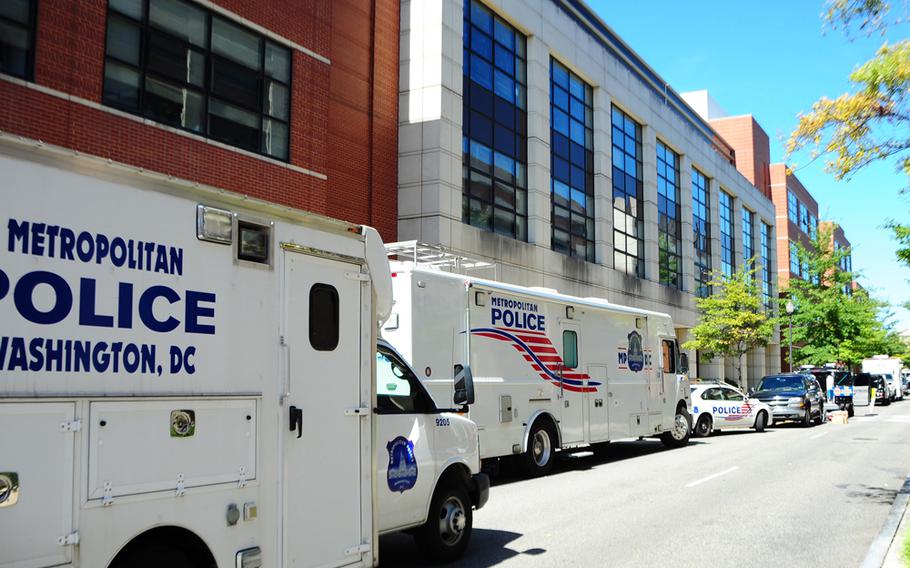 Washington Metropolitan Police Department vehicles are parked near the Naval Sea Systems Command headquarters building at the Washington Navy Yard on Sept. 18, 2013. The Navy awarded a $6.4 million contract to make safety repairs and assessments on whether to keep the building. On Sept. 16, former sailor Aaron Alexis shot and killed 12 people in the building. (Pedro A. Rodriguez/U.S. Navy)

The Navy has awarded a $6.4 million contract for immediate safety fixes to the Washington Navy Yard building where a gunman killed 12 people last month, though the service hasn’t decided whether to keep the building.

The Navy awarded CH2M Hill Constructors a fixed-price contract Sep. 30 to carry out the work and assess damage to the Naval Sea Systems Command headquarters building, according to a statement Monday.

The contract also calls for Colorado-based CH2M Hill to come up with “alternative concept designs” for replacing the building, which spans 650,000 square feet and includes room for 3,000 workers.

“No decision has been reached on the final disposition of [the building],” according to the statement, adding that Chief of Naval Operations Adm. Jonathan Greenert and Navy Secretary Ray Mabus will wait for the assessment.

On Sept. 16, former sailor Aaron Alexis fatally shot 12 employees and wounded more before dying in a gun battle with police.

The incident prompted questions over how Alexis, whose background included a prior arrest and multiple debts, was able to obtain security clearance and facility access.

Secretary of Defense Chuck Hagel has ordered two security reviews — one by his office and one by an independent panel — that are due Nov. 15. The Navy is conducting its own review of security measures worldwide, due Oct. 31.