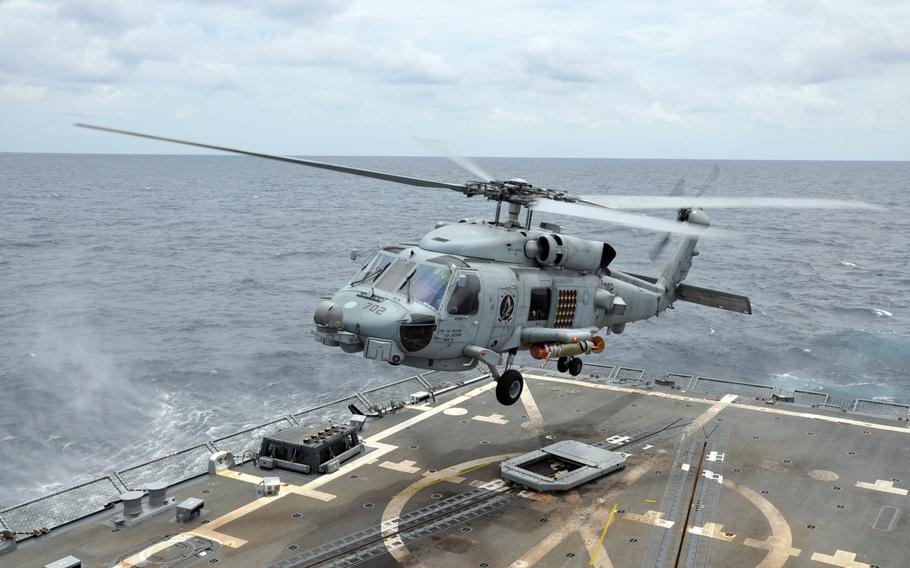 An MH-60R Sea Hawk helicopter lifts off from the guided-missile destroyer USS Wayne E. Meyer for a torpedo training exercise during Cooperation Afloat Readiness and Training 2014 off the coast of Singapore. (Kimberly R. Stephens/U.S. Navy)

An MH-60R Sea Hawk helicopter lifts off from the guided-missile destroyer USS Wayne E. Meyer for a torpedo training exercise during Cooperation Afloat Readiness and Training 2014 off the coast of Singapore. (Kimberly R. Stephens/U.S. Navy) Sailors aboard the USS Halsey take in mooring lines as the ship gets underway on Aug. 3, 2014, in support of Cooperation Afloat Readiness and Training 2014 off the coast of Singapore. (Gabriel S. Weber/U.S. Navy) 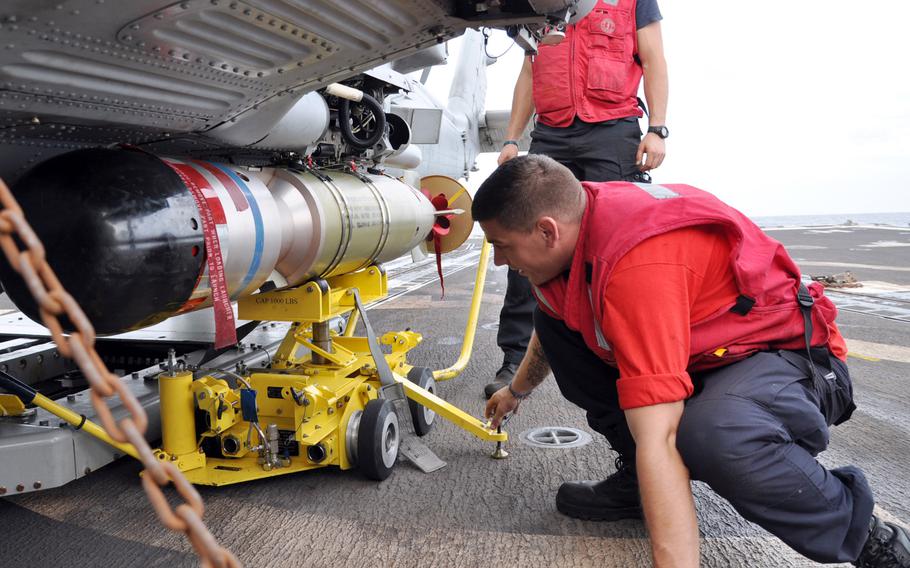 Navy crews have been picking up valuable lessons from their Singapore counterparts on how to maneuver in the sea version of heavy traffic — a mix of civilian and military vessels, sometimes spiced up with pirates.

Singapore’s sailors spend much of their time in the Strait of Malacca, one of the world’s busiest shipping lanes. It is constantly transited by countless vessels carrying oil and other cargo between the South China Sea and the Indian Ocean.

That knowledge and experience has been passed on this month to Navy servicemembers deployed to Singapore for the annual Cooperation Afloat Readiness and Training exercise.

“There is a page in their playbook that we need to be stealing,” Navy Capt. Fred Kacher said Monday, shortly after returning from a cruise on the RSS Formidable, a Singaporean navy frigate.

Kacher, the Destroyer Squadron 7 commodore, led a 1,000-strong U.S. force, two destroyers, a nuclear submarine, a fuel ship and a P-8 Poseidon aircraft during the exercise. He said there was a lot to learn from watching the Singaporeans navigate the busy shipping lanes.

Ian Chong, an assistant professor in the Department of Political Science at the National University of Singapore, said the operational environment around Singapore is different to that in most other parts of the world.

“Naval vessels need to be concerned with heavy civilian traffic,” he said.

Piracy is also an issue, and military personnel must be ready to support law enforcement and other agencies in an emergency. That requires cooperation across national boundaries, which makes planning and coordination more complex, Chong added.

During gunnery exercises with the Americans, the Singaporeans used their local knowledge to maneuver and avoid bad weather and civilian shipping, she added.

The U.S. has been conducting CARAT exercises in Singapore for 20 years. Singapore is also home to Task Force 73 and Command Logistics Group Western Pacific — logistics organizations that arm, fuel, feed and support the 7th Fleet’s operations in the region.

American engagement there is expanding.

The USS Freedom — one of several new fast, shallow-water vessels known as littoral combat ships – recently completed an eight-month deployment to Singapore. It will be replaced by another LCS, the USS Fort Worth, later this year, according to the Navy.

The U.S. and Singapore have agreed to deploy up to four littoral combat ships to Singapore for a year or more at a time with San Diego-based crews changing out every four months, Kacher said.

Singapore is the base for other CARAT exercises in nine South East Asian nations, along with a similar engagement in Vietnam, he said.

“Rather than focus on who a potential adversary might be, it is better to focus on how our navies work together at sea,” he said.

Singapore is close to several potential flash points in the South China Sea, where numerous small islands and the resource-rich waters around them are subject to competing claims from China, Vietnam, the Philippines, Brunei, Malaysia and Taiwan.

Singapore isn’t among the claimants, but freedom of navigation, maritime safety and overflights are extremely important for the country, Chong said.

“Any act by claimants that might endanger those things would be of serious concern to Singapore,” he said.

The Singapore government’s strategy in allowing U.S. forces to operate from its territory is to foster greater engagement in the region with a major power. The goal is to give powerful nations a stake in the region’s stability and a stake in Singapore’s stability, he said.

The advantage for the U.S. in having a logistics hub there is that it can resupply ships headed to the Indian Ocean and the Persian Gulf, Chong said.

“If Singapore is seen to be an important jumping off point for U.S. deployments, the U.S. might want to keep that,” he said.