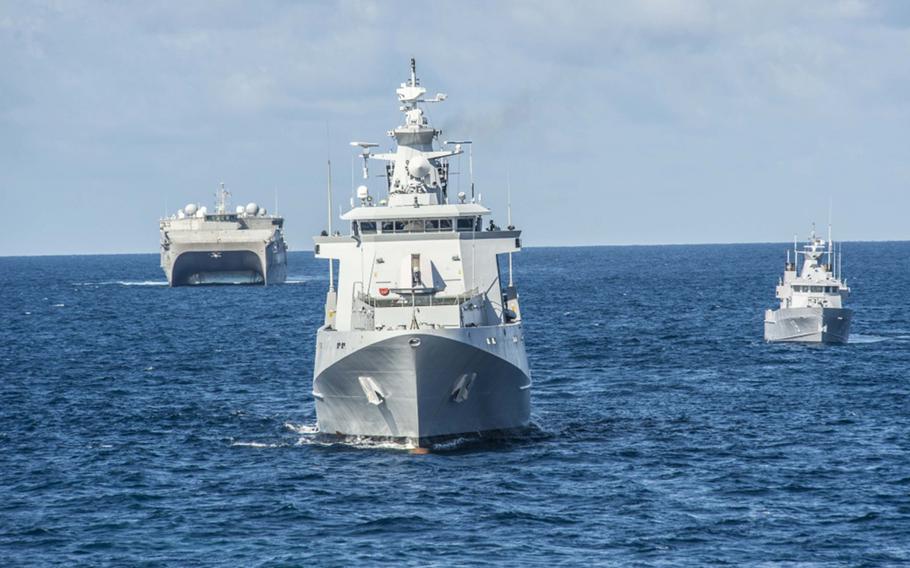 U.S. and Brunei armed forces finished their 25th annual maritime training exercise Thursday at Muara Naval Base, Brunei, after more than a week of operations in the South China Sea.

&#8220;This is what partnership looks like,&#8221; Navy Rear Adm. Joey Tynch, commander of Logistics Group Western Pacific, said in a Navy statement at the conclusion of Cooperation Afloat Readiness and Training, or CARAT. &#8220;There&#8217;s no better demonstration of our shared commitment to a free and open Indo-Pacific than working together at sea.&#8221;

Brunei sits just 160 miles from the nearest island in the Spratly Island chain, closer than several of the countries laying claim to territory within it.

China, Vietnam, the Philippines, Taiwan and Malaysia all claim portions of the Spratly, a chain of nearly 100 small islands and reefs. Together, the claimants occupy 45 of the islands.

China, considered the most assertive in the region, alone has artificially created more than 3,200 acres and installed military facilities on seven of the islands, according to the Center for Strategic and International Studies.

Part of the 2018 U.S. National Defense Strategy calls for countering China&#8217;s claims in the western Pacific, a move that includes the U.S. working with countries like the Philippines, Australia and Brunei.

Brunei, however, claims no territory in the Spratlys but has declared an exclusive economic zone within a reef there. That gives it standing to assert a right to take advantage of the area for economic purposes, such as imposing fishing regulations or generating energy from waves.

The training included tracking exercises, deck landing qualifications and medical evacuation simulations, divisional tactics and replenishment at sea, according to the statement.

Additionally, the exercise this year included an aviation component, with a focus on joint training and search and rescue. A Navy P-8A Poseidon took part, along with Brunei military helicopters, according to the statement.

For the first time in this exercise, the Navy employed an MQ-8B Fire Scout Unmanned Autonomous helicopter with surveillance cameras for visit, board, search and seizure drills.

&#8220;Our relationship with Brunei is special, because we&#8217;ve been working together with the Royal Brunei Armed Forces for over 50 years, and we share a comprehensive partnership built on trust and a continued commitment to train in various maritime situations,&#8221; Capt. Matthew Jerbi, commodore of Destroyer Squadron 7, said in a Navy statement.

CARAT Brunei 2019 is the fourth leg of the exercise that has already included separate training with Sri Lanka, Indonesia and Thailand.