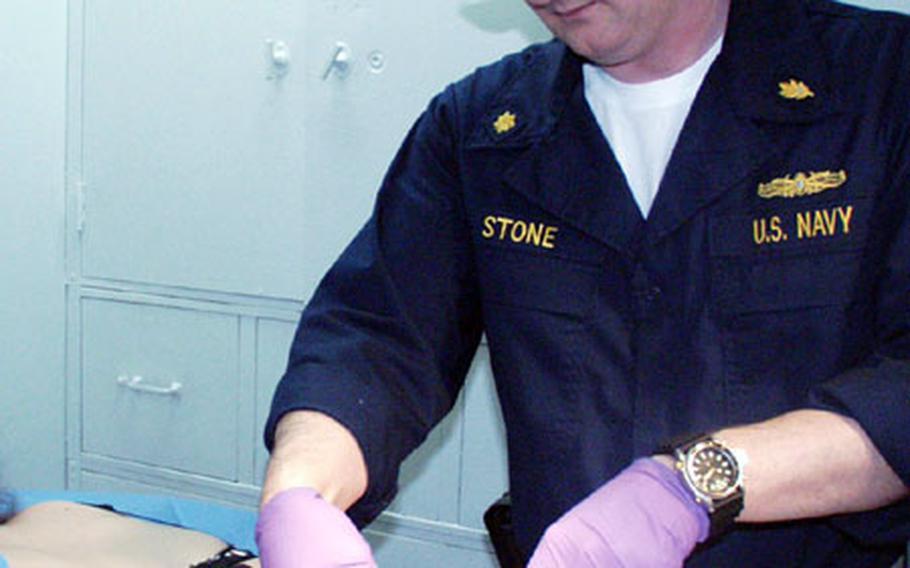 Lt. Cmdr. Jeff Stone, the senior medical officer on the USS La Salle, removes a fatty tumor from Seaman Jacki Harris&#39; back on the ship in Gaeta, Italy. Stone said he got "slammed" — involuntarily assigned — when he was pulled out of a diving medical officer course and sent to North Carolina. (Kendra Helmer / S&S)

Lt. Cmdr. Jeff Stone, the senior medical officer on the USS La Salle, removes a fatty tumor from Seaman Jacki Harris&#39; back on the ship in Gaeta, Italy. Stone said he got "slammed" — involuntarily assigned — when he was pulled out of a diving medical officer course and sent to North Carolina. (Kendra Helmer / S&S) 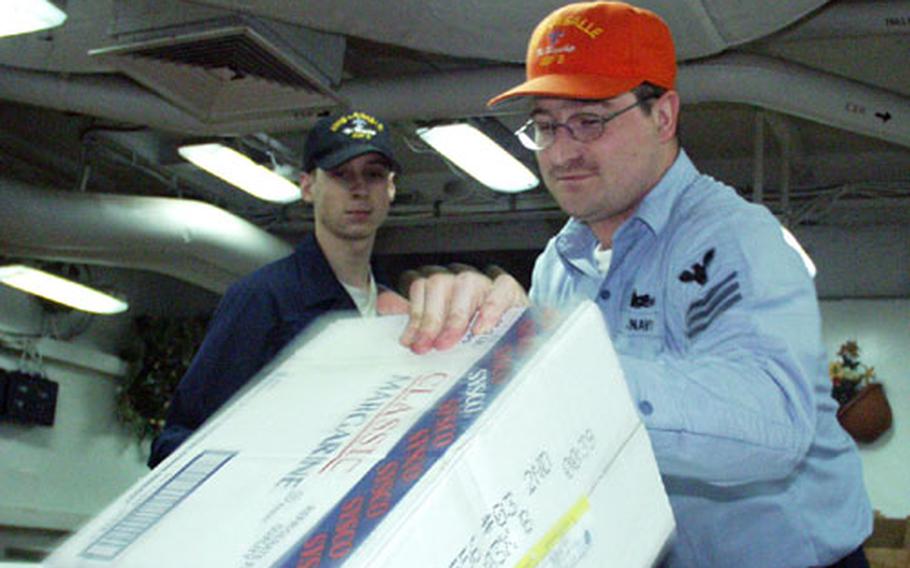 Petty Officer 1st Class Regan Schraeder moves frozen food into the freezer on the USS La Salle. Schraeder said he got "slammed" — involuntarily assigned — when he asked the Navy to keep him overseas, but he was sent to recruiting duty in the States. (Kendra Helmer / S&S)

NAPLES, Italy &#8212; Cody A. Wassman&#8217;s belongings were on their way to Key West. And so was he, waiting for a flight to his new duty station in Florida.

Then his old chief ran into the air terminal.

&#8220;He came running up with a new packet and said I was going to [elsewhere],&#8221; said Wassman, now a petty officer second class on the USS La Salle in Gaeta, Italy.

Navy officials say they&#8217;re working to reduce the number of involuntary orders by improving the Job Assignment and Selection System.

A recent change to JASS modified the responsibilities of the detailer, the person in charge of prioritizing which jobs were filled first and finding a sailor to fill them. It was a conflict of interest, Klatt said in a telephone interview.

&#8220;The detailer was working for both the sailor and the command ... kind of like trying to sell your house and having a real-estate agent working for you and the buyer,&#8221; he said. &#8220;The detailer really needed to be focused on the desires of sailors and less concentrated on coming in to work to fill a billet.&#8221;

So in October, the task of prioritizing jobs was turned over to the Enlisted Placement Management Center in New Orleans.

The changes to JASS are part of Project SAIL &#8212; Sailor Advocacy through Interactive Leadership &#8212; a program that began nearly a year ago. SAIL uses improved technology and communications to get more sailors in the jobs they want, and in jobs that are good for their careers, Klatt said.

Technological changes involve the Internet and &#8220;team detailing.&#8221; Sailors and their command retention teams can go online to view updated lists of billets and to look at possible future assignments.

Navy officials hope to get sailors to look beyond a job&#8217;s location. &#8220;Through the process of team detailing, we&#8217;re trying to work with the sailors well before the order negotiation period to show them what would be best for their career,&#8221; Klatt said.

Klatt said he thinks the changes have led to fewer involuntary assignments, but won&#8217;t know for sure until a year&#8217;s worth of statistics are ready in the fall.

&#8220;There are still going to be sailors that may have to be involuntarily assigned to the job. ... The Navy has to do that occasionally to meet fleet requirements,&#8221; he said.

Petty Officer 1st Class Regan Schraeder, a damage controlman on the La Salle, just wanted to stay overseas, preferably in Italy, where his wife was from.