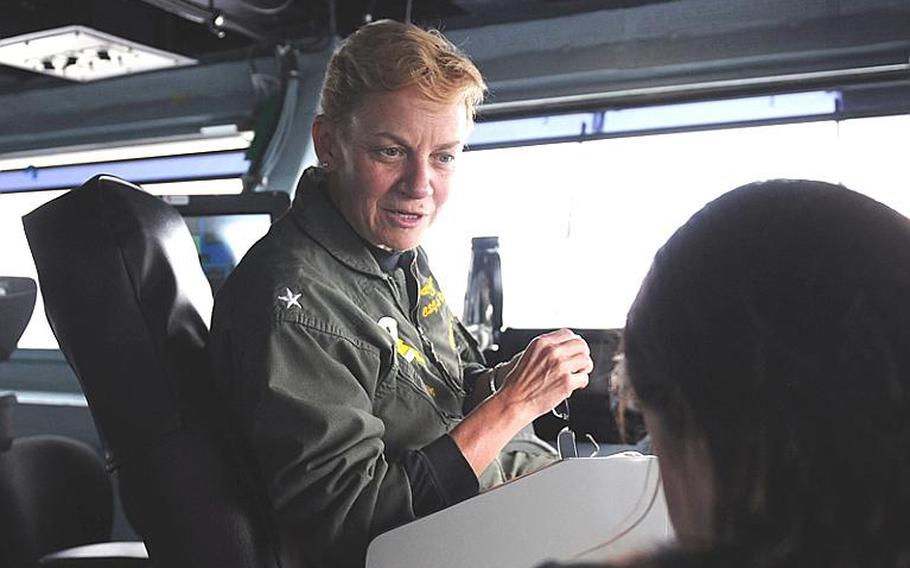 Last year, Rear Adm. Nora Tyson become the first female commanding officer of a carrier strike group. Now leading the group on its deployment aboard her flagship the aircraft carrier USS George H.W. Bush, Tyson--shown here last month on the Bush flag bridge--is nonchalant about being the woman that broke this glass ceiling. "To me, it&#39;s all about professionalism, doing the job to the best of your ability," she said. (Seaman Apprentice Brian Read Cas)

Last year, Rear Adm. Nora Tyson become the first female commanding officer of a carrier strike group. Now leading the group on its deployment aboard her flagship the aircraft carrier USS George H.W. Bush, Tyson--shown here last month on the Bush flag bridge--is nonchalant about being the woman that broke this glass ceiling. "To me, it&#39;s all about professionalism, doing the job to the best of your ability," she said. (Seaman Apprentice Brian Read Cas) 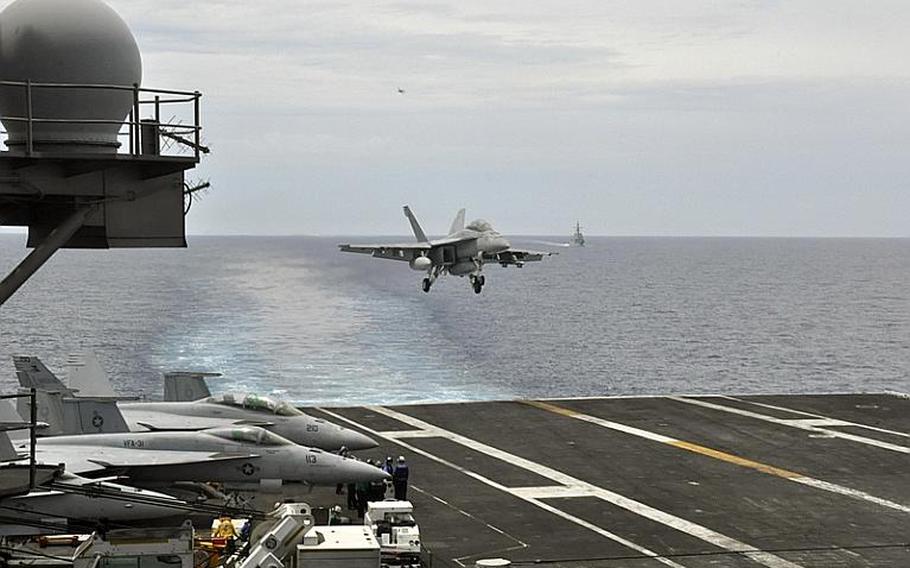 ABOARD THE USS GEORGE HW BUSH June 10, 2010 A jet comes in to land on the aircraft carrier USS George H.W. Bush earlier this month. The bush is leading Carrier Strike Group 2 on a deployment that is expected to last about seven months. For the first time in Navy history, a woman will be leading the group. Rear Adm. Nora Tyson took command of CSG 2 last year. (Geoff Ziezulewicz/Stars and Stri) 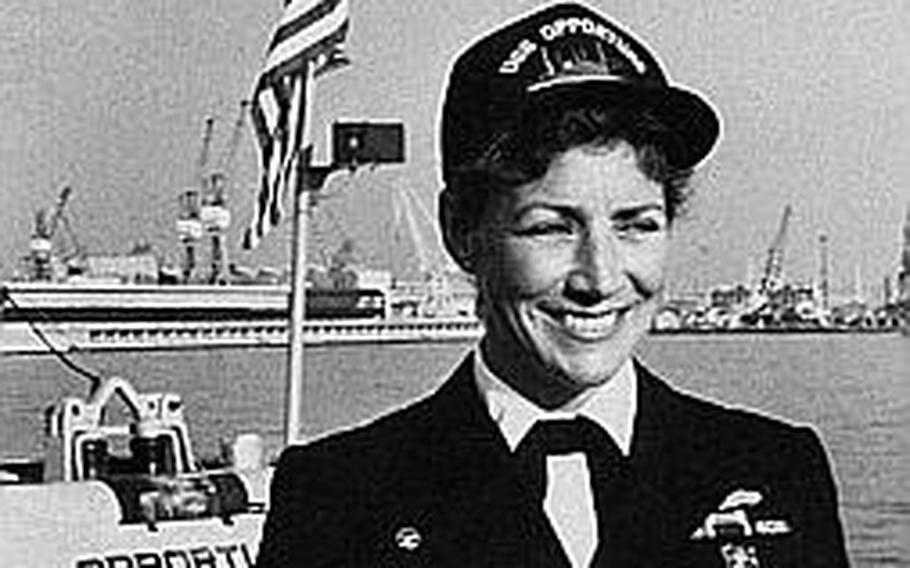 Retired Navy Cmdr. Darlene Iskra made history when she become the first woman to command a commissioned vessel in 1990. Iskra said it's difficult for women who are 'firsts' in the Navy to acknowledge the accomplishment when it happens, partly due to the spotlight that is on them and the desire to do a good job, gender aside. (Courtesy of Darlene Iskra) 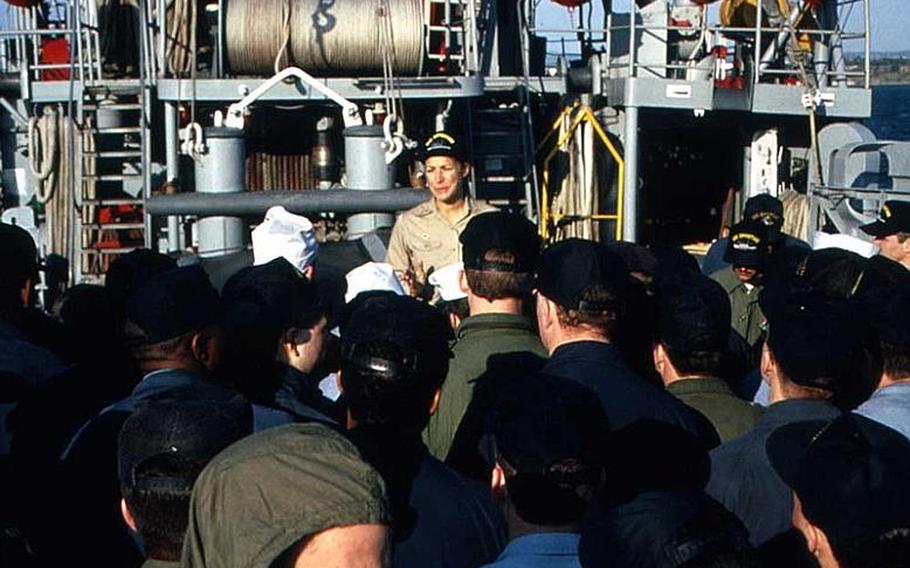 Retired Navy Cmdr. Darlene Iskra, shown addressing her crew aboard the USS Opportune days after becoming the first woman to command a commissioned vessel, said that many hurdles still exist when it comes to gender equality in the military. (Courtesy of Darlene Iskra)

ABOARD THE USS GEORGE H.W. BUSH &mdash; Nora Tyson didn&rsquo;t imagine herself in the Navy when she graduated from college in 1979, let alone that she would be a trailblazer for women in the service. But last year, Rear Adm. Nora Tyson became the first woman to command a carrier strike group.

For Navy women who have come before her, Tyson&rsquo;s command of the USS George H.W. Bush carrier strike group is a big deal, another step in a slow-yet-steady plod toward a more gender-neutral Navy.

&ldquo;This is really good for people as a whole,&rdquo; said Darlene Iskra, who in 1990 became the first Navy woman to command a commissioned vessel when she took charge of the USS Opportune. &ldquo;This is progress.&rdquo;

&ldquo;To me it&rsquo;s all about professionalism,&rdquo; she said, &ldquo;doing your job to the best of your ability.&rdquo;

Whether in the innards of a destroyer or on the flight deck of a carrier, Navy women have steadily increased their presence and authority on board combatant ships over the past 20 years.

Women make up about 14 percent of the military&rsquo;s commissioned and enlisted ranks overall, according to the Women&rsquo;s Research and Education Institute, a nonprofit that tracks women&rsquo;s issues. Within the Navy, they are about 16 percent of the active-duty force.

Progress for gender equality across the military has varied, Manning said, adding that she believes the Navy has been in the lead among the four services.

The Air Force has the highest percentage of women, 19.2 percent of the ranks, according to the Women&rsquo;s Memorial Foundation. But the service has some gaps in the number of women holding senior leadership positions, Manning said. The Marines and the Army have been slow to support the idea of giving women equal opportunity in combat-centric jobs, she said.

Despite Tyson&rsquo;s milestone, Navy women &mdash; and military women in general &mdash; still face social obstacles working in a culture that, despite the gains, is male-dominated. Institutional hurdles and gender preconceptions remain, Iskra said. &ldquo;It&rsquo;s important to keep putting the word out that there are still things that women have not accomplished because of the structural impediments of society,&rdquo; she said.

Enlisted and commissioned women-at-sea, serving in a variety of jobs, might not be unusual to many young sailors in 2011.

In 1993 and 1994, laws and regulations banning women from serving in combat aviation or aboard combat ships were lifted.

The changes followed the Tailhook scandal of September 1991, which many view as a turning point in how the Navy handled gender.

In September 1991, the Las Vegas Hilton Hotel hosted the 35th annual gathering of about 4,000 Navy and Marine Corps aviators, 900 other active-duty and reserve officers and about 100 contractors, retirees and members of the public. Reports were rampant of misconduct, misbehavior and a hotel-corridor gauntlet of sexual harassment.

A Defense Department Inspector General&rsquo;s report found that 83 women and seven men were sexually assaulted during the convention. Tailhook &rsquo;91 affected the careers of 14 admirals and nearly 300 aviators, according to PBS&rsquo; &ldquo;Frontline.&rdquo;

Manning said women in the Navy endured numerous slights in the workplace after the scandal broke and the world got a glimpse of the boys&rsquo; club side of the service. &ldquo;It was a horrible time to be a Navy woman,&rdquo; Manning said.

She recalled not being invited to a party by an aviator admiral she worked for. &ldquo;He invited every other captain in his command and left me off the list because he was angry about what women had done to aviation,&rdquo; she said. &ldquo;We got saddled with the sins of aviation leadership.&rdquo;

Two years later, the first women aviators made their way into aircraft carrier squadrons, enduring a rough start, she said.

Men would give the newly arrived women the silent treatment, Manning said, refusing to coach or integrate them into the workings of the squadrons.

&ldquo;When something was new to women,&rdquo; Manning said, &ldquo;the guys in it felt somehow that letting women in was a slur to their masculinity.&rdquo;

Retired Navy Capt. Jan van Tol was halfway through his deployment in 1994 commanding the destroyer USS O&rsquo;Brien when women first arrived on board combatant vessels.

Four female officers and three chiefs came on board first to help the all-male crew get used to having women around, van Tol said. Soon after, 40 to 50 junior-enlisted female sailors joined them.

&ldquo;It&rsquo;s not about the relative competence or ability of males or females,&rdquo; he said. &ldquo;I certainly had private concerns, because what the Navy was doing as a policy was bringing young men and women together on warships at the prime of their natural sexual urges and yet, at the same time, insisting that training &hellip; could mitigate that. And to some extent it can, but to some extent, you&rsquo;re always fighting human nature.&rdquo;

Van Tol said he noticed a change among the male crew members. The O&rsquo;Brien was part of the Japan-based Forward Deployed Naval Forces, and van Tol said he encouraged a &ldquo;professionally aggressive attitude in the Wardroom&rdquo; because a call to fight could come at any time.

&ldquo;It&rsquo;d tell my crew, &lsquo;We&rsquo;re 48 hours from the gun line in North Korea,&rsquo;&rdquo; said van Tol, now an analyst with the Center for Strategic and Budgetary Assessments, a nonprofit that deals with national security strategy and defense planning. &ldquo;When the women arrived, what I noticed, certainly in the Wardroom, was that everybody suddenly behaved more politely and nicely, and that took a certain edge off the &lsquo;offensive spirit&rsquo; I thought important to foster in a front-line ship.&rdquo;

Despite the gains, Iskra said, military women in general are subjected to everyday slights, rumors and innuendo.

There is also the constant specter of sexual harassment.

&ldquo;It&rsquo;s somewhat fostered by the military environment,&rdquo; Iskra said, in failure on the part of leadership to call people to task for inappropriate comments and actions.

Manning acknowledges the inevitable joking and teasing that comes with working in a male-dominated environment.

&ldquo;I grew up in a family with four brothers,&rdquo; she said. &ldquo;Every woman has to decide in her own head when it&rsquo;s too much.&rdquo;

Manning said harassment tends to be less of a problem in a unit that has some strong female chiefs:

&ldquo;It&rsquo;s frowned on in a way that it didn&rsquo;t used to be frowned on.&rdquo;

When women like Tyson hit such military command milestones, it inevitably leads some to grumble that more qualified male officers were passed over due to gender politics, Iskra said.

&ldquo;People get jealous because they think you have an edge&rdquo; because of gender, she said.

Some say that in its rush to equalize leadership, the Navy has at times promoted the wrong women.

Capt. Holly Graf was the first woman to command a cruiser before she was relieved in January 2010 for, among other things, fostering an abusive environment. Graf displayed similar behavior while commanding the USS Winston Churchill, according to a Navy Inspector General report.

&ldquo;There were severe professional flaws there in terms of command climate and treatment of subordinates that should have been apparent to various superiors beforehand,&rdquo; van Tol said. &ldquo;There was a definite interest in pushing to have the first female cruiser captain. To me, that was the most egregious case of pushing an officer for political reasons.&rdquo;

On board her flag ship last month, Tyson acknowledged the unique challenge that Navy women face.

&ldquo;Because it&rsquo;s a historically male-dominated profession, I think most women are going to work pretty hard,&rdquo; she said, noting that women will soon be serving on submarines for the first time.

Iskra said she did feel some backlash during her career, but people were also supportive when she took command of the USS Opportune.

&ldquo;There was already a stack of congratulatory letters on my desk,&rdquo; she said of her arrival on the ship. &ldquo;Some of them were just addressed to the first woman commanding officer of a ship.&rdquo;

While accomplishments like Tyson&rsquo;s are a step forward, it&rsquo;s hard for her to stop and publicly acknowledge such things when there&rsquo;s a job to do, Iskra said.

While focused on the mission of getting her strike group through this deployment, Tyson said her achievement can serve as an example to other women.

&ldquo;I hope I&rsquo;m the first of many,&rdquo; she said, acknowledging the increasing number of Navy women ascending the ranks. &ldquo;There&rsquo;s going to be plenty coming behind me.&rdquo;