Navy ‘Volkswagen’ being phased out 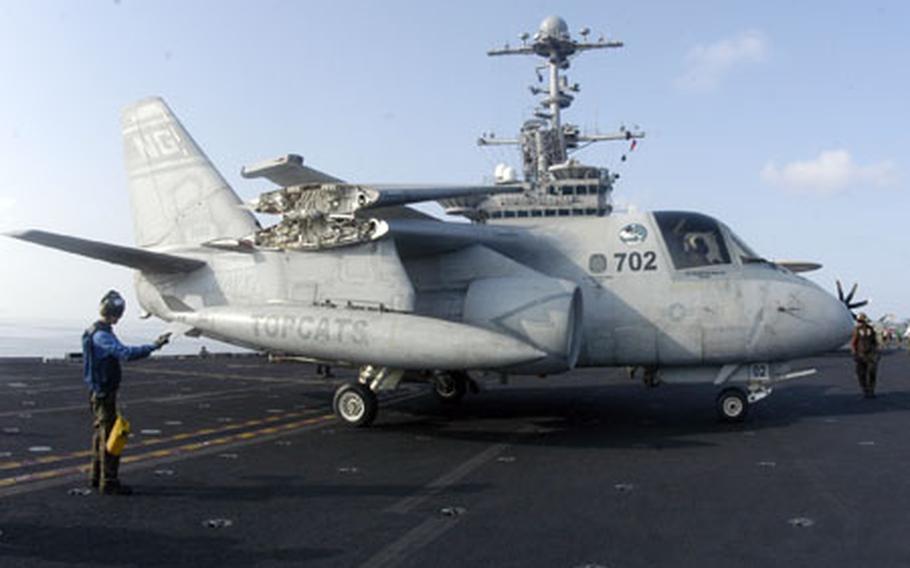 An S-3B Viking from Sea Control Squadron 31 folds its wings and parks Saturday on the flight deck of the aircraft carrier USS John C. Stennis after returning from a mission. (Sandra Jontz / S&S)

But the S-3B Viking&#8217;s farewell is nonetheless heartbreaking to the pilots and crew who fly it. And as the plane is phased out over the next two years, some Viking crews are on their last deployment.

Four Viking squadrons remain in the Navy&#8217;s lineup, all based on the East Coast. One is set to retire this spring, followed by VS-31 in March 2008, a third later in 2008, and the final squadron bidding adieu in early part of 2009.

VS-31, based in Jacksonville, Fla., flew across the country to embark on the West Coast-based Stennis for the squadron&#8217;s farewell deployment, which finds the ship and squadron patrolling the Arabian Sea and conducting air strikes over Afghanistan.

Master Chief Petty Officer Gregory Weatherington retires after 28 years in March 2009 &#8212; the same time as the beloved, reliable aircraft that they affectionately call the &#8220;Hoover&#8221; because it sounds like a vacuum cleaner.

But the Navy has to keep pace with technology and improvements, Langdon said, as the service inches its way toward reshaping its air wings, mainly with F/A-18 E and F Super Hornets.

Pilots will transfer to the Navy&#8217;s Fleet Replenishment Squadron, where they will learn to fly other types of aircraft. Enlisted sailors will simply rotate to other commands.

Originally built to search for and destroy submarines, the Vikings today can scour the surface as well.